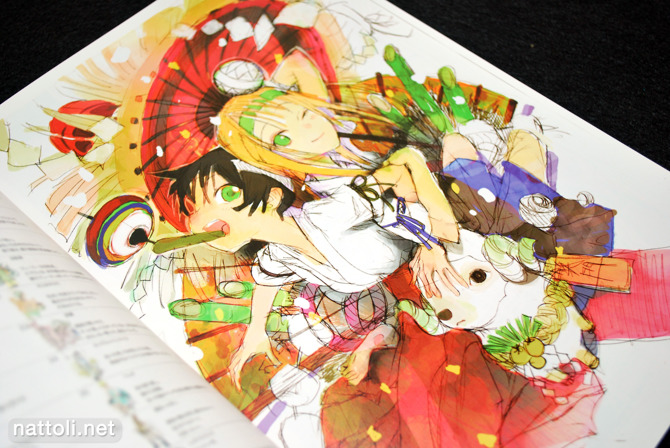 Okama, whose circle is UB, has worked on a lot of popular (and not so popular) titles ranging from Diebuster Aim for the Top 2!, Himawari!, and Getsumen To Heiki Mina, the animation for the live action Densha Otoko that later became an anime. He also has a long running manga called Cloth Road, which is serialized in Ultra Jump Magazine.

Okama's doujinshi series of books called bu ub are subtitled "back up of homepage ub." And that is literally what it is, years of his homepage in a book format. Not only are the illustrations included, but so are his posts through out each of the months. 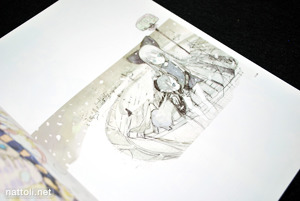 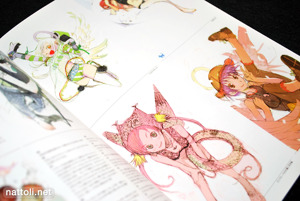 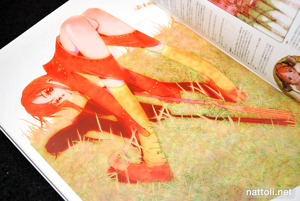 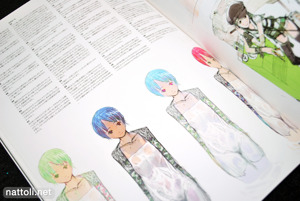 This first volume spans from 2002 to 2003 and is 36 pages in length (including covers). Though I wouldn't say Okama's style has changed drastically through the years, the art work in his earlier doujinshi are more like are quite different in the face---more round with realistic shading---when compared to his more recent work.

The image index for bu ub is actually at the front of the book, and lists by image, not by page. Some pages have several images, others just have one. There are two pages of oekaki illustrations that Okama did over those two years, but they are not included in the index, as they're small and tiled and just for fun. The image count for this doujinshi is 32, which includes both sketch-like illustrations and finished ones.

When I say sketches though, I don't mean just black and white illustrations; bu ub is in fact full color. Sketches refers more to the rough style of the line art in the book, where you can see lighter pencil lines of lines that aren't to be included in the final piece. Some of the art works actually appear in Okama's Okamarble, but look much different in their final forms.

I've always liked Okama's work, and I tend to seek out art books with his work in it. Would you actively collect an artist's small illustration doujins, or would you rather just wait for a commercial art book?

Wow looks like too much text, a pass for me.

Yep hate it when they fill the pages with text, maybe if you're japanese it's useful information but I still think I would be annoyed when it isn't full page images!

Wow, Okama has got to be the BEST artist around, kicks RM's ass easily.