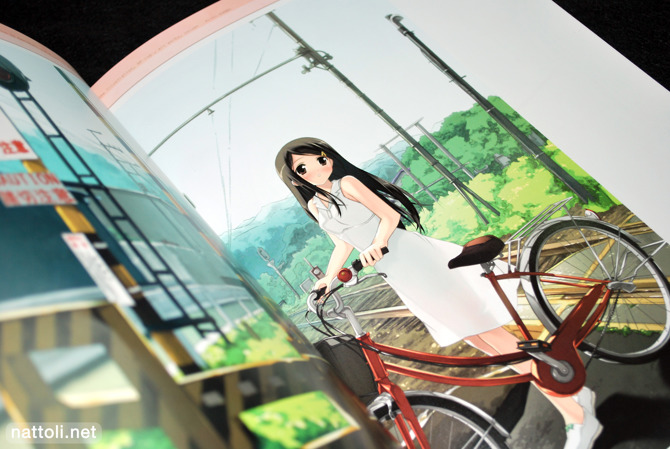 I'll start out by saying, this book was not what I expected. But not in a bad way, I just had thought it would be something else ^^; 5th Year Memorial is a 54 page collection of art work that Kantoku (カントク) drew for his home page over the past 5 years. 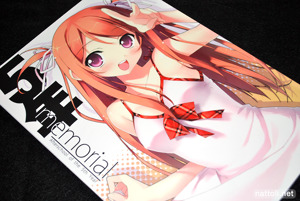 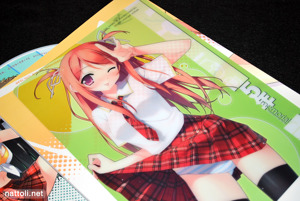 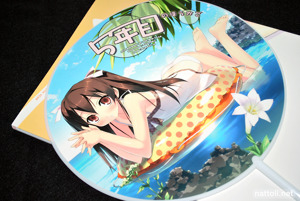 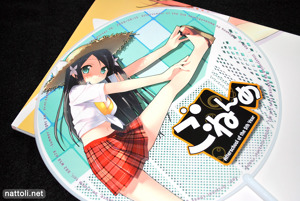 I bought the Comiket set that came with a fan and a pencil board off of Yahoo Japan Auctions, both with illustrations that weren't included in the book. Well, one side of the fan was included in the "how to" section, and a crop of the pencil board illustration was in the book. A more practical question, do people actually use those fans outside in public? Better yet, would you?

The first few pages of the book are dedicated to new illustrations (6 in total) that Kantoku drew exclusively for the doujin. The illustrations feature Hatsune Miku, his mascot Kurumi (also on the cover), K-ON's Yui and Azusa, Bakemonogatari, Cardcaptor Sakura, and Diebuster. 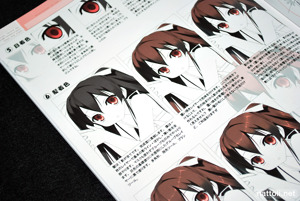 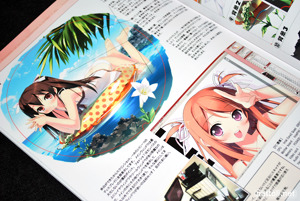 There is also a small section where Kantoku outlines the steps taken to illustrate and color the art work that was on the extra fan.

The common theme for Kantoku's home page illustrations was that most were from copyright anime and games. So really, this ends up being a book of fan art. I love his take on characters like Hina Ichigo from Rozen Maiden, Amu from Shugo Chara, and the gang from Manabi Straight!

Most of the illustrations did not get a full page, and were instead tiled three or four images per page. This still works out well, as the printing is very high quality and the book is A4 sized on non-textured paper.

I was surprised to see Nikki from Mirai Nikki in there a few times. Haruhi from The Melancholy of Haruhi Suzumiya, along with the Code Geass girls also appeared in a few illustrations. Kantoku also includes his original character, Kurumi (the girl in the checkered skirt) in the mix of illustrations.

Since the pages are ordered by when the illustrations appeared on his home page, the art for more recent series is towards the back. Kantoku even managed to include tributes to shows as recent as K-ON, and Toradora. 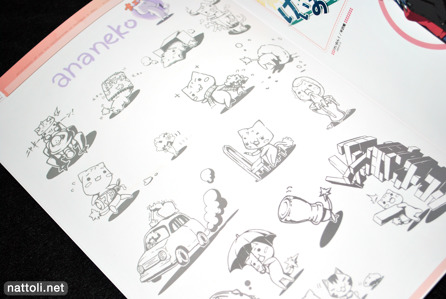 There's a tiny bit of black and white towards the back, that includes sketches from K-BOOKS cards, and other material not in the book.

How's the quality of that fan?

I don't have any other fans like it to compare to, but it was better than a plastic freebie I received in a Newtype. It'll get you cool ;D

Doesn't look like there's too many full page images in this one. I don't really like the page arrangement with lots of small images.