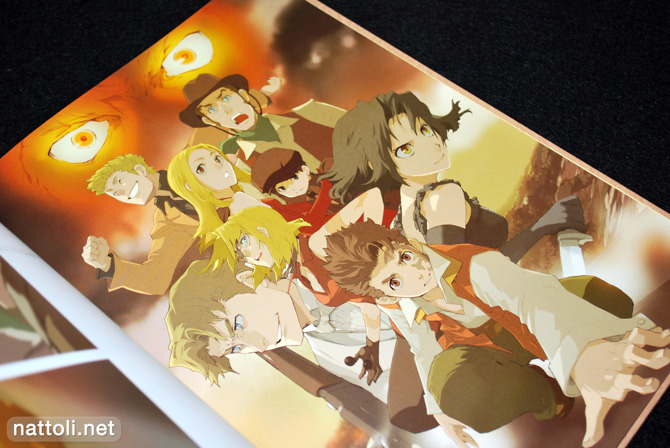 Enami Katsumi Illustrations Baccano! came out at the end of February, and marks the first art book for this artist. While the Baccano! art work from the light novels and DVDs is the focus (and title) material, there are also illustrations from other light novels along with original art works. 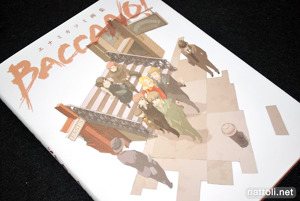 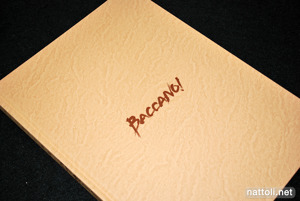 The art book is hardcover, which is uncommon for shorter books, this one being only 112 pages in length. The slip cover has a new illustration and that's one of the few the book includes. The undercover has an interesting rustic design, trying to look like an old journal or the like. 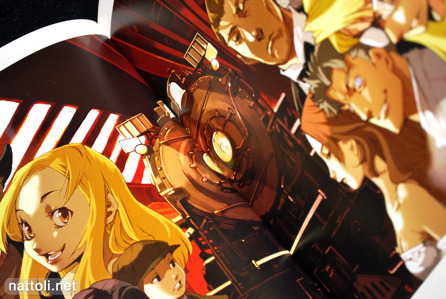 Yes, you are seeing double. One high quality production value to note is that all the two page spread illustrations have been printed with overlap in the center, so you don't have to bend the book backwards to see what may have been sucked into the gutter. Even though they took that into consideration, the full page illustrations are still printed to the edge, without white margins for the most part.

The outside wrap of the book boasts "300 illustrations" so I knew that could only mean one thing: lots of images to a page. I love Enami Katsumi's art work, so having known that ahead of time didn't stop me, but it is something to consider. Many of the images are displayed at an inch and a half in height, which really loses detail in print.

Unless you're a die-hard Baccano! fan, you'll probably not have seen half the images in here mostly due to the variety of merchandise it came on. Enami Katsumi's characters always have so much life and expression in their faces, it really makes the art work a joy to look at. They just never get a cookie-cutter feel like some artists' characters do so he can really create an ensemble cast.

There are also six pages of black and white illustrations from the inside of the light novels. These images are really just there for completion, as they're all tiled in a nine illustrations per page layout. Not all have nine, but that's the maximum it's designed to hold. Anyway, these small monochrome illustrations account for 44 of the book's 300 illustrations. These illustrations also mark an end to the Baccano! section of the book. 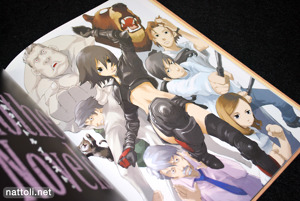 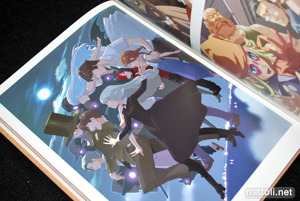 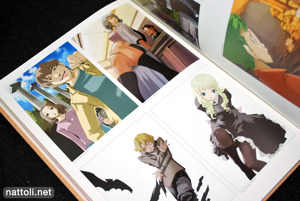 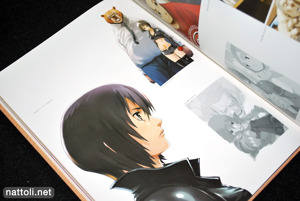 The section directly following Baccano! is titled "Another Novels" and includes illustrations from Alice, which ran in Dengeki Bunko, along with Vamp! (ヴぁんぷ!) which also ran in the same magazine. The black and white illustrations from Vamp! are also featured with 15 illustrations over two pages.

The rest of this portion has illustrations from Sekai no Chushin, Hariyama-san (世界の中心､針山さん). Some of the monochrome art works for the series are included in small sizes along side the color ones. The "Another Novels" section runs from pages 63 through 87.

The final section of the book, titled "Etcetera" runs from pages 89 through 105, with illustrations Enami Katsumi did for a variety of series, which includes work from Ys Seven, Star Ocean the Last Hope, Junkgirl Jig (ジャンクガール・ジグ) and Andaka no Kaizou Gaku (アンダカの怪造学). There are also freelance fantasy illustrations in the mix. 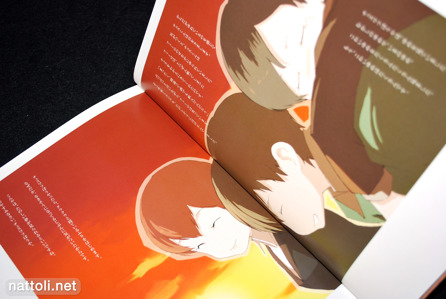 The book ends with six pages of new, super deformed Baccano! illustrations with a mini-story to go with it. Aside from the cover, it's the only other art work that was done newly for the book. Overall, the very small print size of so many illustrations really weighed heavily on my overall impressions of Enami Katsumi Illustrations Baccano! I liked it, but I would have loved it had so many of those tiny illustrations been given the attention they deserve.

Got this one, I like it quite a lot, good review for anyone else who wants it.

Where did you get the book? Amazon? Cause I see quite a difference in price: ￥ 2940 = $30, and the other being $46? I know AmazonJP does not do international shipping, but then isn't the price too much of a difference?

Amazon Japan does do international shipping on most printed material, CDs, and DVDs and yes, that's where I bought this art book. Import shipping costs are higher, but when you're not paying a $16 markup on top of shipping, then it's not too bad. Especially when you group it with other items you want :D