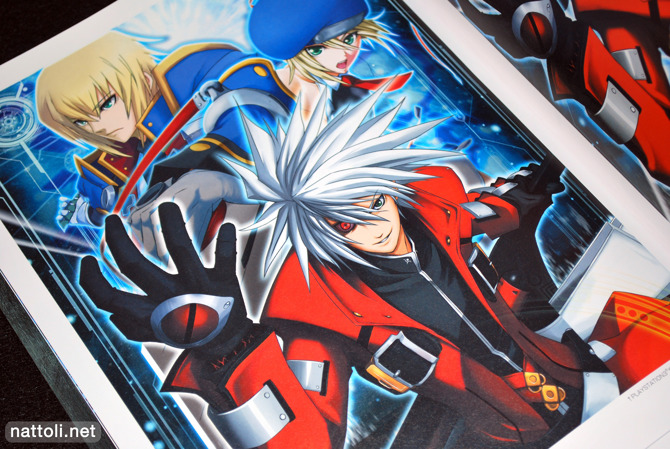 I started playing BlazBlue with my husband back in July. At first, I was completely awesome at it. And then my learning curve flattened out and he started to win more than I did. I hear the way to go is specialize with one character, but I can never keep interested in a game that way. At least that's my excuse ;P 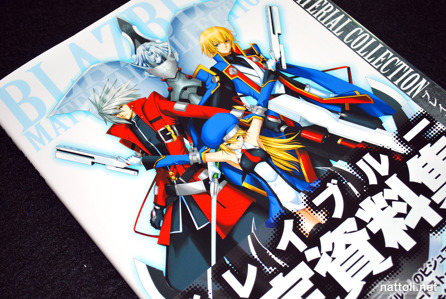 I normally don't purchase game books, but the exception is definitely when it's one I like to play. I was sad to have missed the pre-order book that came with the game, so I was thrilled to find out they were finally coming out with an official art book.

A lot of the art in the book looks anything but official, but it is, they just had a lot of artists doing promotional art work for the game. We start off with the standard stuff, the art from the game boxes and booklets. 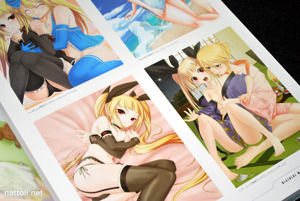 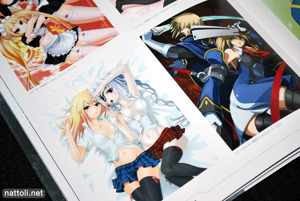 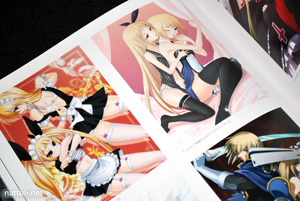 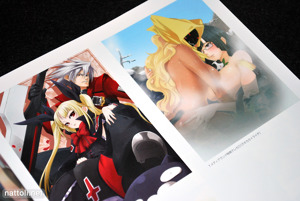 Then the book features the art from the CDs and tele-cards. I don't know if you've seen them, but tele-cards are hilariously overpriced calling cards that usually have an exclusive illustration on them. So most people who buy them buy for the art work and not the phone calls ;D So if you lived in Japan, you would have been lucky enough to have picked up one of these Rachel x Noel tele-cards depending on what store you bought your game from. Don't you wish the rest of the world could get extras like that?

After than section, we have more illustrations from promotional art. The art in this section really varies from picture to picture, but that's because most are drawn by different artists. My only qualm with this section is that the images are tiled, several to a page in some case. It's harder to appreciate these really detailed illustrations in such a small size. But it's also possible that some of these illustrations were just small to start out with, since some of it does look like "home page" art. And, this book is slightly larger than A4 in width. 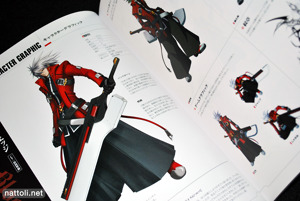 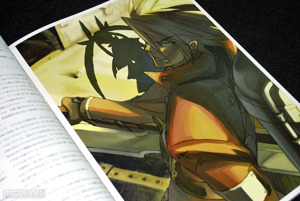 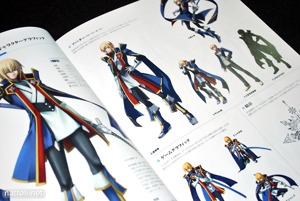 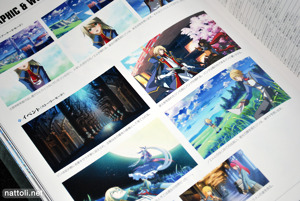 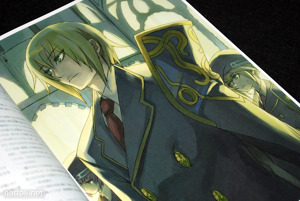 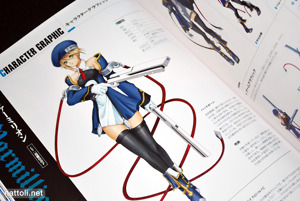 The next part of the book is "Character." This section is the majority of the book and is pretty straight forward. Each of the playable characters is presented with their profile image, their additional poses from the in-game stills, concept art (and some of it is really out there), the CG scenes from their story line, and finally a brand new character illustration. There's also a page of back story, but as you can guess, I can't read Japanese so I'm only in it for the art. 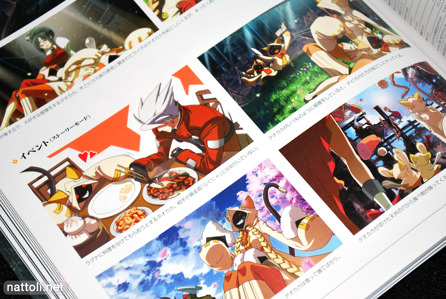 I was hoping for better presentation of the CG scenes from the game, but they are tiled even smaller than the art in the illustration section, as you can see above. Another cool thing that's available on their profile pages is the design for the weapon symbol. 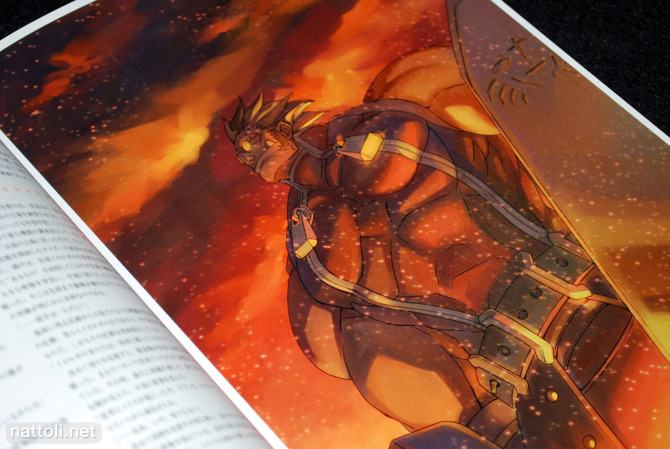 I'm not a Tager fan, but he has the best original portrait in this book. He looks quite badass. 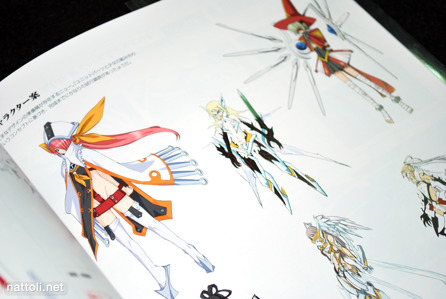 I also really enjoyed the early concept art for some of the characters. v-13 started off looking almost nothing like she looks in the game. She would certainly fit more into the Guilty Gear scene with that design. In fact, most of the characters looked a lot more like they belonged in Guilty Gear with their initial designs.

Overall, I thought this was really good for a 144 page, full color game art book, and I especially loved the book-exclusive illustrations for each of the characters. You can still get your own copy of this book off of Amazon Japan. It's also available at a lot of other on-line import and export shops with a little bit of mark-up in the price.

And P.S. Is there anyone who can't win with Jin?!

I love those chibi ones! They should make a (mini) game consisting of those guys entirely! XD

Seems like every game artbook has a problem putting loads of tiny bio style images as can fit on a page and mess it all up.

Yeah, it does make it rather less like an art book :/

Do Want! Considering that BlazBlue is almost my latest videogame addiction, this book is a must for me. :D

Oh and, awesome new site nat, I love it! I'll be checking it out for any interesting artbook review. :D

Sparkling Bang...now I have seen everything. Also, I never saw that picture of Carl's sister before (the one next to his official art). Was it in the game?

Nope it wasn't in the game, that picture was one of the new ones drawn exclusively for the book like the Sparkling Bang! XD

Is there any chance of using a US/CND card to buy the book from amazon?

You can't use an ATM card, but any debit or credit card with one of those universal logos like Visa works.

I've been a big fan of BlazBlue ever since I first played it. I would like to know where I could purchase that game book?