Queen's Blade Rebellion Eirin and Yumil is available on Amazon 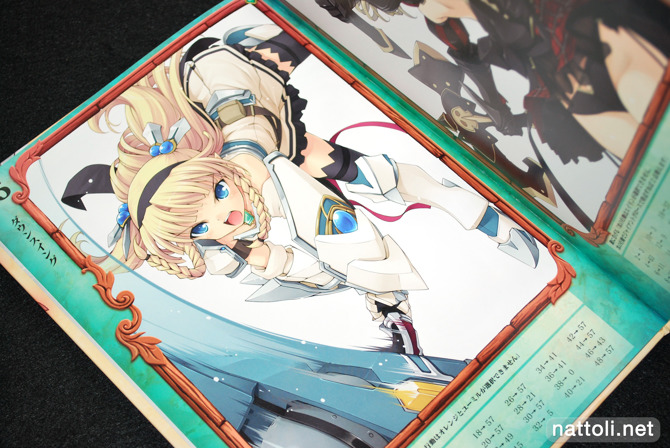 The newest book in the Queen's Blade series came out at the end of last month, on April 30th. Though I don't always buy Queen's Blade books, I do buy them when they feature artists I like which in this case is Hiiro Yuki. For a sample of his work outside of Queen's Blade, check out my review of his Comiket 77 release, Fabularisia Minus Art Works 1999-2009. 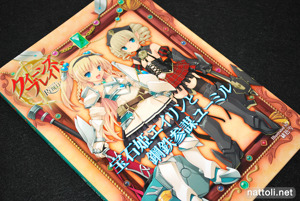 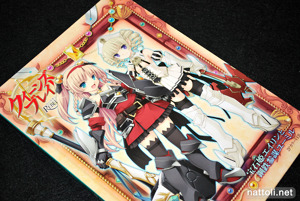 Queen's Blade Rebellion Eirin and Yumil features two characters; Yumil, who was originally designed by Mibu Natsuki, and Eirin designed by Hiiro Yuki---although both are drawn by Hiiro Yuki in this book. Like the other books in the series, it's hardcover and B5 in size. There is also an alternate color version of the two girls printed on the undercover itself.

The new character Eirin looks like the kind of girl that Hiiro Yuki would be drawing anyway, which is a good thing. He even captures Mibu Natsuki's Yumil, whose outfit has never been more risqué.

Yumil's new special power? XD I really enjoy the dual illustrations, as most of the Queen's Blade characters started out featured in solo books. There have been a couple of other "pairs" books with the Queen's Blade Rebellion series, but this is the first one with an art style (and characters) that have appealed to me.

If you're unfamiliar with the Queen's Blade combat book series, this is the format they're all in; 30-odd pages of "moves" in each book, girls fighting, and at some point struggling to keep her clothes in one piece. They are short, but they're also fairly priced at ￥1500 each. I don't think I'll be reviewing the others, but I did want to provide a good point of reference for people wondering exactly what's in one ^^

I've always been curious about the Queen's Gate and Queen's Blade character books. For the most part the illustrations always interested me, though I tend to stray away from art books that focus on just a single character in different poses/situations. Out of all the ones released, if I were to choose, I would get the ones featuring Arein (Alleyne?) and Dizzy.

They also released one for Kasumi from DOA. She's one of my favorite DOA girls, second only to Ayane. I'd also buy that one. Hmmm...in fact...I think I might...

You can get the Dizzy one cheaper than retail on Mandarake, if you don't mind used books! I haven't been won over by any from Queen's Gate yet, not a fan of the characters selected even when I do like the artists ^^;

Looks like a terrific "Queen's Blade" book. Do like the style and good balance between cute and ecchi, at least it doesn't look too risky like some of the other books.

Am usually only interested in them if the art is by an artist whose work I really like, such as Mahiru Izumi's Mai Shiranui "Queen's Gate" book or Matsuryu's Allean "Queen's Blade" book.

Yeah, by Queen's Blade standards this is a really tame book. But I think I would have been surprised to see extremely ecchi works by Hiiro Yuki, as that doesn't really seem to be his thing...

For the moment, I don't have Queen's Gate/Blade book in my collection, because there are somes illustrations.. hum ecchi. But I like this one ^^ I love chara design of Eirin and Yumil, two adorable loli