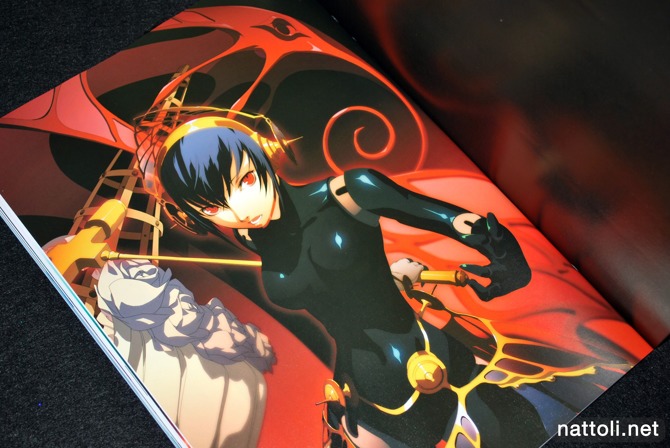 Shigenori Soejima Art Works 2004-2010 was released at the beginning of August and showcases the artist's illustrations from the games Persona 3 & 4, along with Stella Deus and a handful of other miscellaneous works. The art book presentation is also fitting for such a beautiful set of art works, with full page illustrations for the most part and a unique cover design.

The art book itself is well designed, with a fog slip-cover over the printed cover and obi, making the cover illustration text free (even though it is repeated in full inside the art book). Shigenori Soejima Art Works is 160-pages long, with a total of 87 illustrations.

Many of the works are placed opposite a solid colored page that either has image information or the line art in a small corner. So for the first part of the book, which is features exclusively Persona 3, it does seem like you're only getting an illustration on every other page (except when they're two page spreads). A few of the spread illustrations suffered the horrible fate of having the character part of the illustration sucked into the margin of the book, as you can see in this picture above. 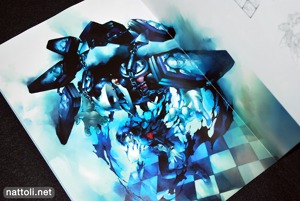 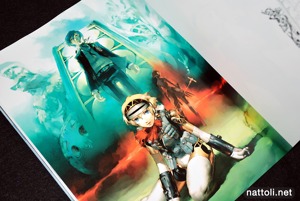 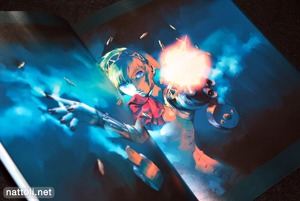 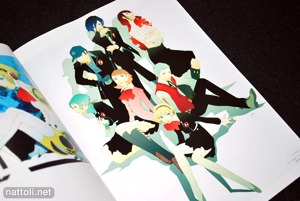 There are also a few illustrations that seemingly could have fit completely onto one page, but instead it was decided to have them slightly overlap onto the adjacent page. In some cases, it's no more than an inch of the illustration spread over the gutter of the book, so it seems quite pointless. Though at first the color coordinated empty pages seemed a bit wasteful, for the most part they really worked to compliment the illustration on the opposite page, like in this picture. 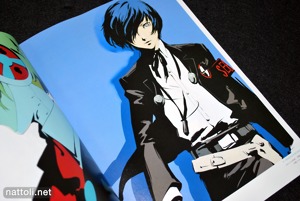 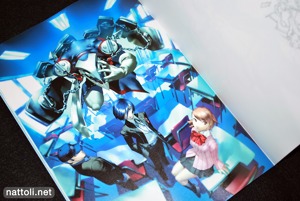 The Persona 3 section is the largest section in the book, totaling 39 illustrations over 65-pages.

There are even merchandise illustrations included, like those from telecards, postcards and clear files, which is actually quite a rare thing to find in an artist's book. There are a total of 21 illustrations from Persona 4.

The imagery of Stella Deus is most reminiscient of the cover style art work for Shigenori Soejima Art Works 2004-2010. While this rounded painterly-style does appear in the Persona 3 section, it was completely phased out by Persona 4. But the fantasy elements of Stella Deus are just better captured with that style. Though there are only nine illustrations in this section, they are some of the best in the book in my opinion.

Finally, the section titled "Other Art Works" contains an assortment of illustrations that, for the most part, I was unfamiliar with. There are eight pages of monochrome illustrations for a light novel that appeared in Faust (ファウスト) Magazine volumes 4, 6 and 7, though the rest of the illustrations in this section are in color. 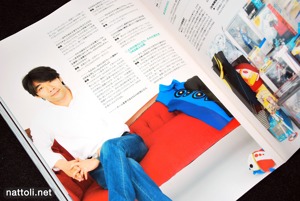 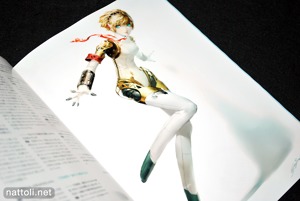 The book ends with a 7-page interview with Shigenori Soejima, along with the cover illustration, but presented in full. Since all the copyright information accompanies each illustration, there isn't a need for an index, and instead there is an appendix featuring a collage of line arts from the finished illustrations in the book. In the end, the illustrations in Shigenori Soejima Art Works 2004-2010 are gorgeous, so much so that I can completely forgive the shortcomings in the page layouts and just really appreciate all the good aspects of this art book ^^

I insta-ordered this book when I saw some Persona 3 images I'd only seen in drama CDs were in it. I always wanted those artworks in art book form. I too like Soejima's more brushed art style better than the clean lines that P4 exclusively has.

Two page spreads are always tricky with the chopped pictures. Good thing the book isn't hardcover; those cut off so much of the middle portion.

I'm not overly fond of those placeholder pages. Do these pages stop after the P3 section?

Is text usually written on the art itself or outside the art along borders?

The placeholder pages are in every section, though it doesn't happen for every picture. But there's no copyright text on any of the images; it's either on the placeholder page, or in the margins around an image, so that's a good thing :3

Nice, really liking the plastic sleeves that artbooks are starting to come with.

Just droppin by for those who might be interested in buying this book in English version that it will be soon released by the UDON company in the translated version. No more information on the looks yet, but it will be seems so the same as the Japanese version and maybe with some slight changes.

Wow, this review makes me want to purchase the artbook!

Great review! I'm thinking of buying a birthday gift for my friends and think this would make a good choice since they're Persona fanatics. :)