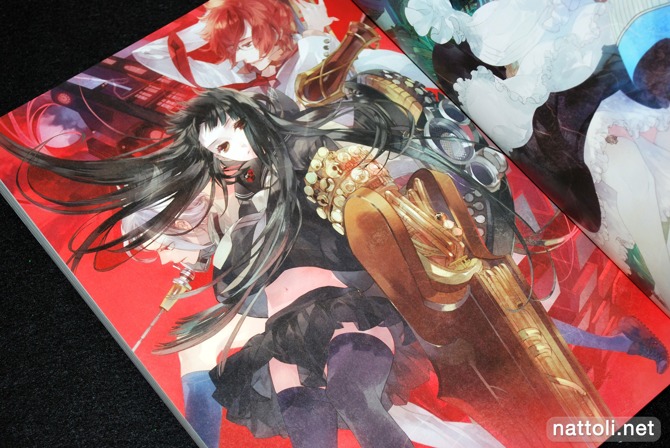 Kazuaki Artworks is a huge, A4-sized 264 page collection of illustrations ranging from original works to copyright series like Shinkyoku Soukai Polyphonica, Starry☆Sky, and many others. This art book was published by Mandarake and really put to shame many of the other art books released in late July, as it contains an extensive collection in a high quality presentation without an over-the-top price tag. 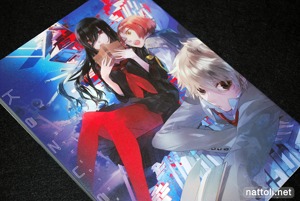 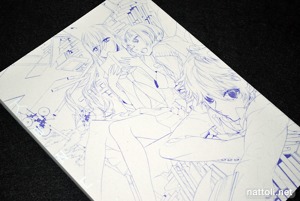 The art book includes several newly illustrated works, including the cover art work. Underneath the slip cover is the line art for the cover illustration, and on the opposite side of the slip cover are several line arts and sketches from the finished inside art works. Though most people probably wouldn't remove the slip cover to even see it, it's a nice finishing touch for the art book.

I had initially thought this book would contain more than its fair share of boys' love (BL) art works because of my limited knowledge about what Kazuaki worked on. While guys are prominently featured, most of the works are action centric and many also have female characters.

Lens and Diabolism (レンズと悪魔), a light novel, makes up a large portion of the first half of the book and is the largest section in the book. In fact, nearly the first one-hundred pages are taken up with illustrations from this series. The character designs are very reminiscent of Nitro CHiRAL's Lamento - Beyond the Void, but without all the cat ears ^^ Even though I don't know anything about the series, the art work is gorgeous, with several two-page spreads and well-designed characters. 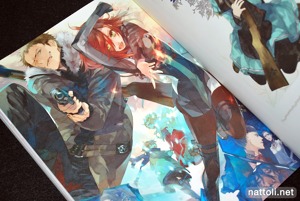 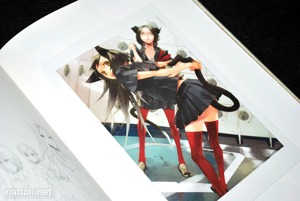 Dragon Killer (ドラゴンキラー), another light novel series---though not as lengthy as Lens and Diabolism---is also included. The section is only 9 pages, with two of those being monochrome sketch works. 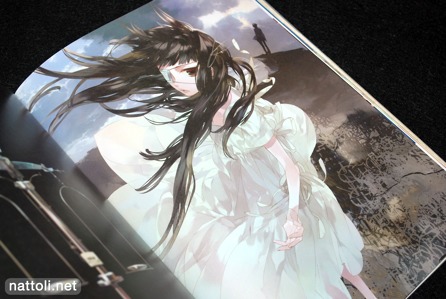 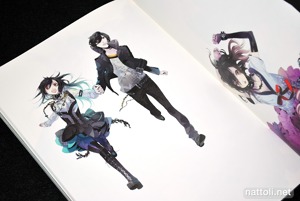 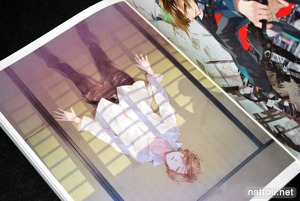 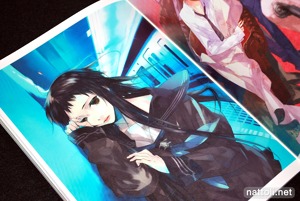 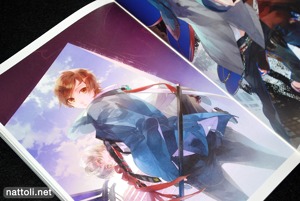 One set of illustrations that really caught my eye were the cover arts from Vampire Kiss (ヴァンパイア・キス). The clothing style is just really trendy and cute, too bad there wasn't a lot of art work for it. The illustrations from Kaiyorihito/Kaiyorishiki were also really nice, but it was also a short section of about 12 pages. 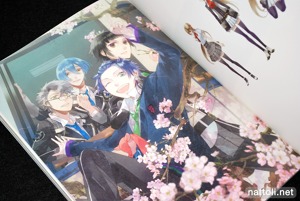 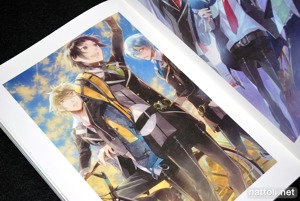 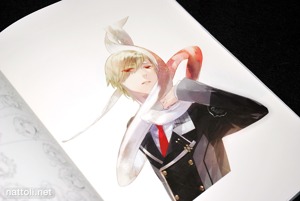 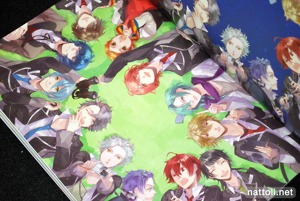 I'm sure some people purchased this art book for the foretold Starry☆Sky art work that would be featured. If you did, you wouldn't be disappointed---there are 30 pages of art work from the series, including the Zodiac illustrations. Interestingly, neither of the fan book cover illustrations were included, so it's not the most comprehensive collection for Starry☆Sky.

I guess the most BL oriented the book gets is from pages 197 through 213 with the Gloria Academy series, which are novels by Rikka Kirishima. After that point, there aren't any more clearly labeled sections in the book, although you can find out where everything is from with the index.

But some of the illustrations in this last part of the book are pretty easily recognizable. There's an illustration from Higurashi no Naku Kori Ni, Umineko no Naku Koro ni, a few from Persona 4, and a couple from Lamento -Beyond the Void.

The book ends with a 4-page collage of what looks to be website art works by Kazuaki, all printed rather small and tiled, with several from Vocaloid. The thumbnail index for the book includes Kazuaki's comments, but the actual copyright information is on a separate page as a list. Kazuaki Artworks is really a great book, and there's even more in the book than I could ever mangage to cover here. And for the cover price of ￥2800, one can only hope more artists can manage to put out collections like this in the future!

I can imagine a separate artbook for Starry Sky alone, what with all the new media coming out for it (honeybee? More like moneybee, lol).

The way Kazuaki colors is so pretty. ;w; Totally worth the ￥2800, IMO.

the art works have an interesting features ,especially the poise of each character seen in every page.

Ohhhh~~!! I've been waiting for you to post a review on this, and WOW I am amazed at the sort of art that's in it! A

I'll have to try and order one from my nearest kinokuniya, because I really can't pass this up!

PLEASE SIR CAN I HAVE SOME MORE?

LOL, I can't believe I'm seeing the same Persona 4 art in here and in a Persona 4 doujinshi I own. I'm not surprised I liked Kazuaki when I first saw it since I did like the P4 art in my doujinshi. Nice review.

Are images evenly divided between guys and girls or is one gender more dominant? Any spine-sucking two-page spreads that chop off a lot of middle image and leave art looking weird?

I really shouldn't get more art books. I've went on a book blitz this past month and got way more titles than I imagined I'd get in such a short period. Damn you, pretty art books! <shakes fist>

I think it might be 60/40 in favor of guys. It feels pretty even when flipping through, but there are spots where there are just more guy characters than girls. The spreads didn't seem too cut off either, or maybe I broke the spine of my book while taking pictures. I can't remember.

Really good review! Thanks for showing us!

Thanks for reviewing it! I'm not really familiar with Kazuaki's work, in fact, I only realized she was the artist behind Starry Sky(which I never played, but the art is gorgeous.) about a week ago. After I found out about the artbook, I looked around for some previews. I stumbled upon your site through google and after looking through this review I decided to buy(along with the Haruhi summer illustrations). I should be getting it next week. I simply can't wait! Thanks again!

You're welcome! :D You'll be happy with both of those, I keep forgetting to review the Haruhi one. By the way, the Fall & Winter art book for Haruhi comes out on Sept 30th, you might be interested in that too ^^

Thanks for the heads up! I'll be sure to pick that one up as well :D