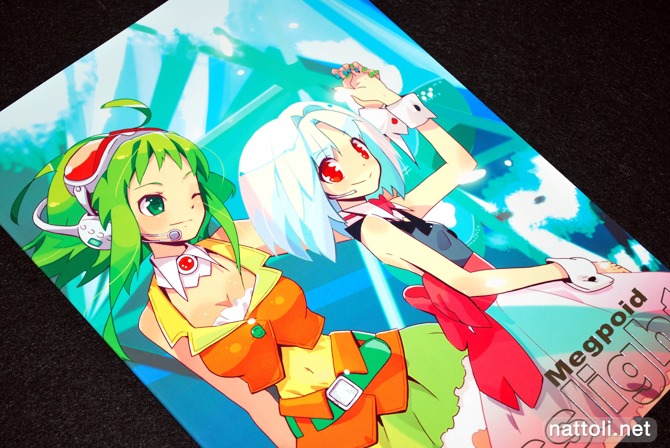 Earlier this year I reviewed one part of Ukke's Comiket 77 release, Girl's Illustrations Winter 2009, with the intention of reviewing Megpoid Crosslight shortly after. I have the "after" part right, anyway. Megpoid Crosslight is essentially a printed version of the art from the Crosslight Project PV which features music by Yuuki Masame and kz from livetune. The Crosslight promotional video where this art work is used can be seen here via the official site, or here on Youtube.

If you've done any exploring on the music video scene from Vocaloid, you've probably noticed that rather than fully animating videos, illustrations are drawn and the camera essentially pans over the art work. Ukke's art works for the Crosslight PV are long and panoramic, allowing the scene to change within the same illustration.

Megpoid Crosslight is 28-pages including the covers, and A4-sized. The cover text is lightly embossed in a metallic silver, and the cover art work is re-printed inside without text as a two-page spread. It's really well-made for a doujinshi. 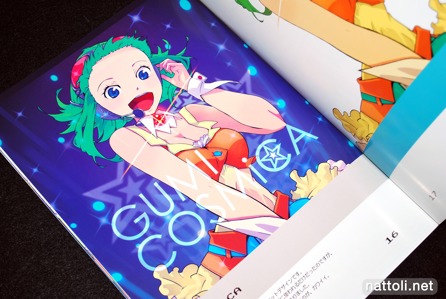 While the first half of the doujinshi featured the actual art works from the promotional video, the second half is more focused on the production and design, and includes line arts as well as character design alternatives for Gumi and Neon, the little white-haired girl. Seeing Ukke's line arts reminds me, you should definitely check out her live drawing of Neon on Youtube. I'm always a fan of Ukke's anime style illustrations, so I did enjoy this purchase even though it's pretty much everything that was in the promotional video ^^; Too bad she didn't do a C78 release.