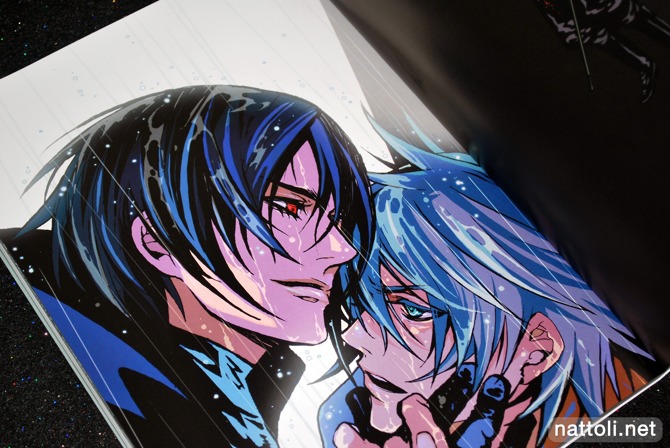 Chayamachi Suguro is the artist for the manga adaptations of Nitro+ CHiRAL's Togainu no Chi and Lamento - Beyond the Void. If you've ever seen the art work for either of those you'll know that while it stays true to the designs from the visual novels, the line work is often intentionally rough and sometimes basic, making her work unique among the Nitro+ CHiRAL artists.

Chayamachi CHiRAL Works is an A4-sized 146-page collection that features art from both Togainu no Chi and Lamento - Beyond the Void as well as a few promotional art works done for Nitro+ Chiral. The cover art work is newly drawn and the black line art for Akira from Togainu no Chi has a plastic finish that you can feel and shines when you angle the book.

The majority of Chayamachi CHiRAL Works is taken up with Togainu no Chi art works, as it has been running longer than any of the other works included in the book. All the art work was done between 2006 and 2010, so it has a very consistent look throughout. Chayamachi's uses color sparingly, and when it's present it tends to be muted. 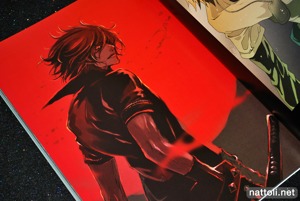 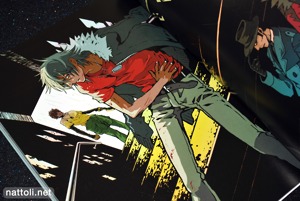 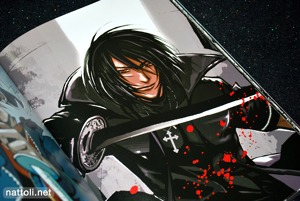 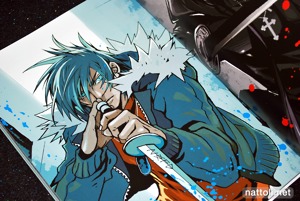 In all, the Togainu no Chi section is 63 pages and technically full-color, although Chayamachi often illustrates monochrome works with just a dash of color. Though the majority of illustrations reflect a simpler manga style, with strong line arts a simple coloring, there are some illustrations that are done in a much more elaborate painted style. That red-painted illustration was drawn for the 2007 Nitro+ CHiRAL Calendar, so it stands out for a reason ^^ 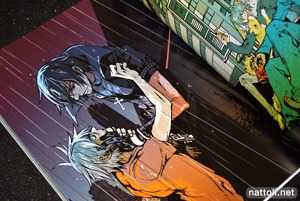 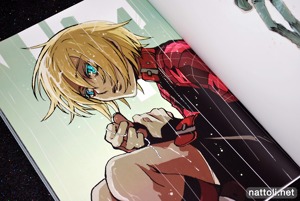 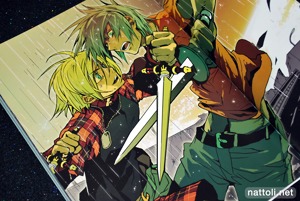 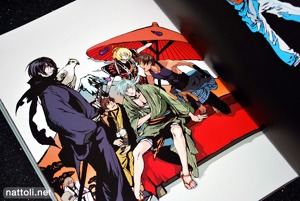 Many of the illustrations included were cover art works for the manga volumes and also illustrations from the magazine Togainu no Chi runs in, Comic B's-LOG. The anime version of Togainu no Chi just recently started, and while the designs aren't the same as Chayamachi Suguro's, you can see their influence in some of the more stylistic scenes in the show so far.

The Lamento - Beyond the Void section of Chayamachi CHiRAL Works is significantly shorter, but it's to be expected since there are only 2 volumes of the manga released. The section is about 20 pages in total and includes a few of the monochrome chapter illustrations. 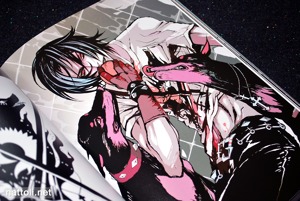 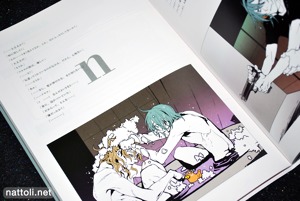 The last color portions in the art book are for special "Nitro+ Chiral Collaborations". The collaboration between Fuchii Kabura and Chayamachi Suguro features fives pages of dialogue story with a picture at the end.

There's also a cute 26-page comic included, called Po-chi Bukuro 2009, which features the guys from Lamento - Beyond the Void running a shop and the guys from Togainu no Chi doing some shopping ^^ The book ends with an interview and a few more randomly placed illustrations. There is a thumbnail index, but it only includes publication information, no artist comments. Overall, Chayamachi CHiRAL Works is a great Nitro+ CHiRAL collection, and I for one would love to see more commercial art books like this from them.

What a beautiful looking artbook, I really like Nitro+ so I'm biased.