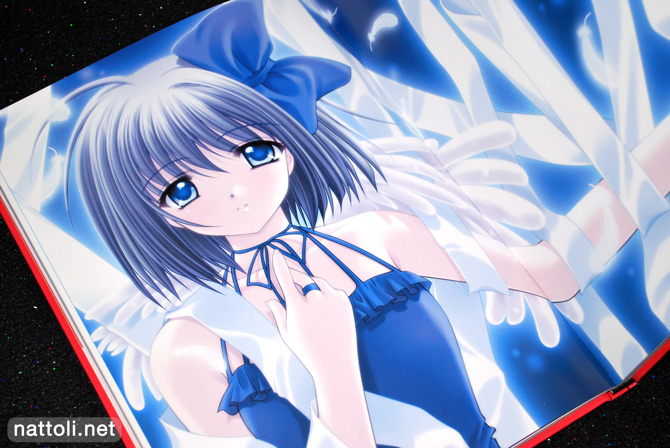 Aoi Nishimata Illustrations Passion is a doujinshi art book that was released at Comiket 67, so suffice to say it was a while ago. Though there are a couple books that are more interview than art book along with series specific books, Aoi Nishimata's first full-fledged commercial art book Vivid will be coming out in December, making earlier books a lot less interesting ^^ So I figured I'd review these while they have a shred of relevance!

Passion is a hardcover art book and 116-pages. The covers are actually included in the page numbering, as seems to be the case more often than not with doujinshi. It's A4 in size and almost entirely in color, aside for a few intentionally monochrome circle cuts. There is no index or image information written next to pictures, but for the most part the illustrations are fan arts or originals.

Since this art book was released in the summer of 2005, the majority of art work pre-dates that, so by today's standards a lot of the illustrations look quite old. On that same note, there are several that reflect Aoi Nishimata's current illustration style, with softer round faces and more ruffly clothing designs.

Though there are some tiled images, most of the illustrations are given full page displays. If you've ever purchased Aoi Nishimata's JOKER TYPE doujins, you may have noticed that's she really into using textured paper. That's actually another unintentional perk of this book, all the same illustrations on non-textured pages, so they have a better look and better colors overall.

The latter half of the art book is quite heavy on fan art works. Aoi Nishimata was a big fan of KEY, and it shows in her many illustrations from Air, Clannad, and Kanon. Also present are fan arts from Higurashi no Naku Koro ni, To Heart, and White Album. 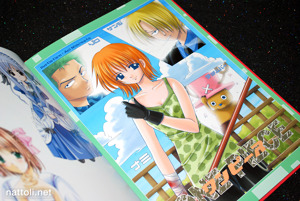 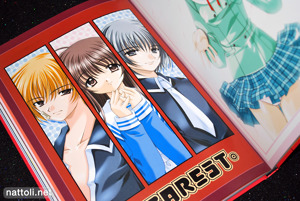 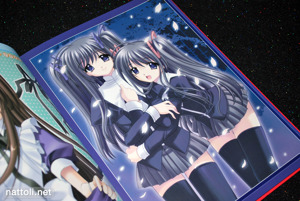 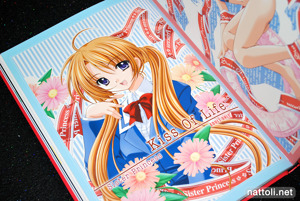 Also rather unexpected were fan arts from One Piece and Fruits Basket. But like many of the other one-shot illustrations in this collection, they were covers for comic doujins. It's the same case for the Sister Princess illustrations, though I'm not sure if that's the case for the Futakoi one above ^^;

It's a nice collection overall, though it's hard to be objective about things from five years ago with my current tastes. I really prefer Aoi Nishimata's current style, and hope to see more of that in her upcoming art book. Passion originally "retailed" for 3,675円 when it was being sold on Toranoana. But nowadays, you can pick it up from used book stores like Mandarake for less (sometimes).

Thanks for the lots of photos! Very in depth today!