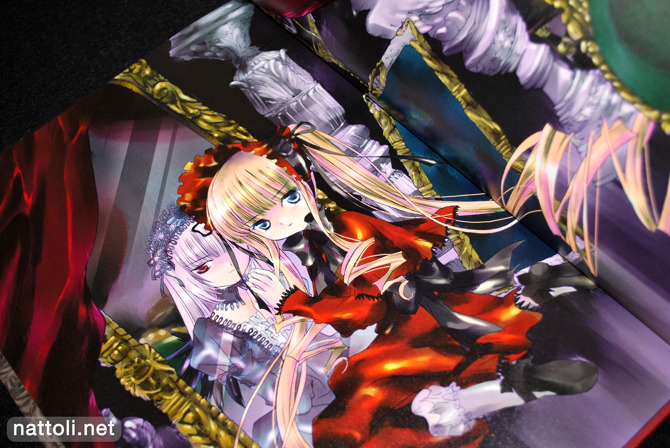 The long awaited art book "PEACH-PIT Rozen Maiden Illustrations" was finally released late last month. The book is hardcover, full color and 88 pages long, which is a bit on the short side of a commercial art book. Although PEACH-PIT consists of two artists, Sendo Banri (千道 万里) and Ebara Shibuko (えばら 渋子), since they don't feel the need to distinguish who drew what, neither do I ^^ 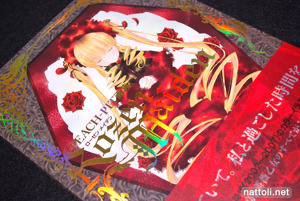 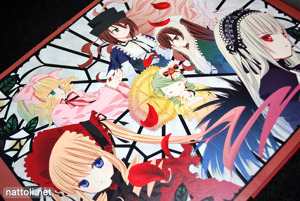 The art book includes two new illustrations for the cover art and the fold-out poster at the front. Everything else has been previously published, but for most of them you can now see the art work without the text that is usually added in magazines and manga covers.

Now here's the disappointing part that often happens with hardcover books: every two page spread image loses about a 1/4" of picture due to the binding. So even if you open the book as fully as possible, the two page images won't line up. And to make matters worse 21 out of the 57 illustrations are presented as two pages spreads.

I understand why they'd choose spreads over fitting an entire illustration on one page; if they'd done that, the book would only have half as many pages. But unfortunately, it really takes away from the presentation to have images that you can't truly view in full.

On the other hand, the art work that fits to a page looks great. Another weird thing that happens in this book is that some illustrations that could have fit all on one page are spread ever so slightly over two pages. As a result, you basically just get a cut off image instead of the whole thing. See what I mean below. 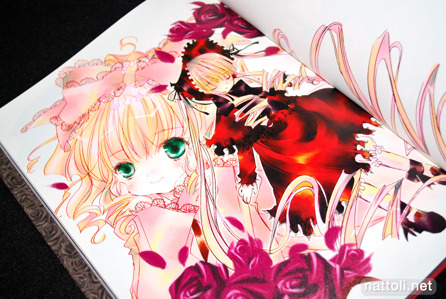 It's still a great picture of Hina Ichigo and Shinku though.

Shinku is of course, most featured in the book. There are quite a few portrait pictures of her that look almost identical. All the images in the collection date from between 2002 and 2007, so though you can see slight evolutions in style, none of the art work looks old or dated. PEACH-PIT continues to produce very high quality art work. 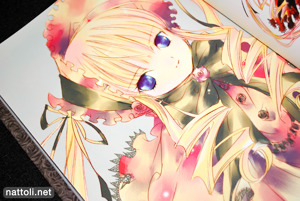 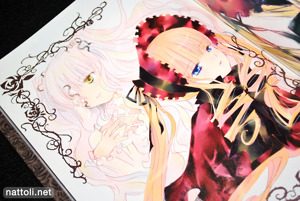 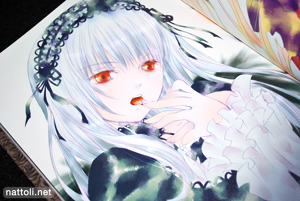 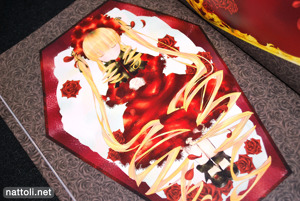 The pictures above are from the section titled "Magazine Covers." Well, except for the Shinku in her coffin-like packaging, that's the cover art for the book. I always find that cover art is so well done, but it's understandable since a lot of people make the decision to buy a book or a magazine based on it's cover. It's probably even more common in Japan where books and magazines are shrink-wrapped in the store. Do you ever buy magazines based on their covers, or do you have to know about the content first?

The final sections of the book include art work of the colored manga pages that had appeared in the magazines, and also a bit of a miscellaneous section titled "Others" where there wasn't really a consistent theme among the images. The full-color thumbnail index of the art work includes artist comments for each picture along with information about where each illustration was originally published.

Did you personally think it was worth the money? I saw it in Kinokuniya over here, and I thought it was a bit thin for what they were asking (quantity vs quality factor). I am a Peach-Pit fan, but my doubts about this book are such that I have yet to buy it.

For me it was worth it, I love their Rozen Maiden art work, and I bought a couple of their other books in the past hoping there would be some RM art in it. If I wasn't a fan and had the ability to wait (and still know I could get a copy), I would have rather bought it used, considering the number of images included and the page alignment issues.

Thanks for the review. I can safely pass on this one it seems. It's a shame publishers don't respect the art work they're publishing :|

Peach Pit always draws the best art, everything they draw turns into gold!

I love that shiny cover, it looks holographic or something! ^_^

Thanks for reminding me about this artbook, forgot it was even coming out!

Bad for the two pages illustrations but indeed still looks like a great book.

Yeah, even with my whining about it, I'm still glad I have it.

Saw this at Kino a few back. Had a chance to take peek inside before I consider whether to buy it or not.

Even though I'm a huge Rozen Maiden, I'm prefer the anime illustrations instead. PEACH-PIT artworks are lovely but it wasn't enough to warranty a buy.

Ohhh, nice! I love the artwork for Rozen Maiden. :)

hmm.... i'm actually going to check out Rozen Maiden after i'm done with lucky star.... but one question.

are they all girls? because the one with the short hair looks like a little pilgrim boy in the anime >.>"

They're all girls, even the little pilgrim boy XD The owner of Shinku is a boy though, if that helps.

hmm... could it really be any more effiminate then lucky star? i doubt it.... os it sounds like a good watch

Shouldn't this also be tagged as Gothic Lolita? Just putting that out there. Also, I bought Rozen Maiden on DVD, and hope its really good.

Yeah, I added the tag. I'm a bit bad with tags, I keep forgetting what labels I've used ^^; I liked it, hope you enjoy it :D I want to read the manga at some point in the future too, since I hear it's different.

I sooo want this book, this took them forever to release...no thanks to publishing problems between companies...I don't know why they had to make the two page spreads though oh well...almost like they were trying to add more pages...Thanks for the review :)

I just love the art work Peach-Pit, its very unique and beautiful. I hope they will make another art book for their second series. Thank you, for sharing this review. :)