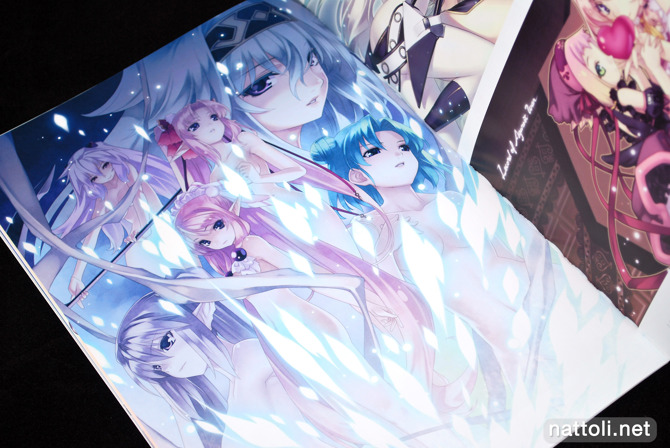 Hirano Katsuyuki has worked on several game titles and is probably best known at this point for his work on Record of Agarest War. But he's also the artist behind BLAZING SOULS, Steady x Study, Spectral Souls, and more. Hirano Katsuyuki Art Works includes art work from all of the above and still has room to delve into Katsuyuki's light novel illustrations as well. It's an impressive collection, focusing on his years of commercial art works. 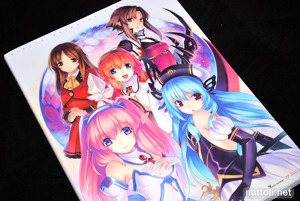 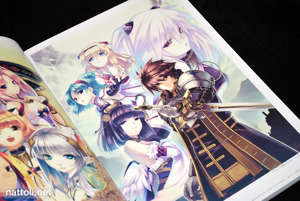 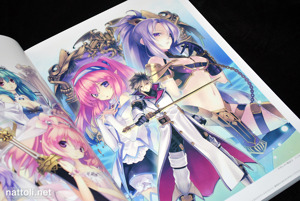 The cover illustration is newly drawn, featuring a crossover of heroines from his various games, and it's repeated on the inside without text (though there's hardly text on the cover). Hirano Katsuyuki Art Works is 160 pages and A4-sized, and almost entirely illustrations excluding 6 pages for an interview and a step-by-step drawing process of the cover art.

The first 20 pages are dedicated to Record of Agarest War and it includes mostly promotional illustrations, with less focus on the individual characters works that you would see in a game art book. Immediately following this section are illustrations from the various Spectral Souls series, covering about 14 pages.

Next up is Blazing Souls with 10 pages of art work, including some pretty Record of Agarest War-like girls in various frilly outfits. The next game featured is Gakuen Toshi Vara Noir (学園都市ヴァラノワール) and it marks a significant style change in Hirano Katsuyuki's designs, with a more anime look and brighter colors overall.

Spectral Souls Genesis and Spectral vs Generations take up the next eight pages, with another game Kingdom Chaos occupying the next six before we get to the game turned OVA Steady x Study. The Steady x Study art work differs greatly from Katsuyuki's newest style, embracing a completely cel-shaded look. There's 14-pages of illustrations from the game, though the last 4-pages of the section feature mostly tiled illustrations, spaced four to a page.

The game series just get shorter and more miscellaneous towards the end of the book, but the crossover illustrations from Cross Edge stand-out because it's not every day you get to see Hirano Katsuyuki's take on Disgaea, Darkstalkers, and Atelier Marie. 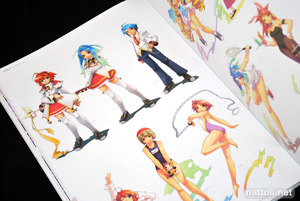 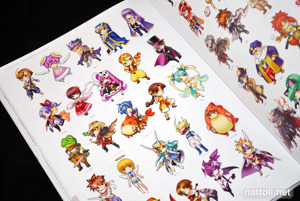 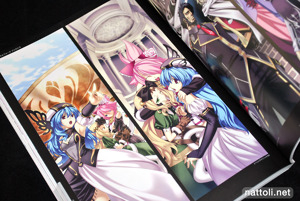 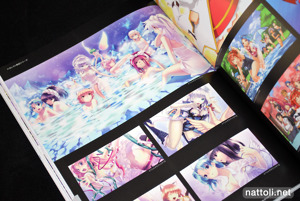 Before the end of the game section, there are some in-game CG works featured along with character profile images. The profile images are overlapping and several to a page, and more or less look like they were just included for the sake of it over 20 pages ^^;

Hirano Katsuyuki Art Works ends with nine pages of light novel illustrations, followed by the interview. There isn't an index, as all the publication information is printed along side the illustrations in the white margins. Hirano Katsuyuki Art Works really turned out to be quite an extensive collection, with more full page illustrations that I'd expected (along with a lot more pages). Even if you hardly know any of the games, Katsuyuki's art work is worth the admiration.

LOL! Was unsure if to buy or not few days already so I said to myself "Hey go check nattoli you fool!" And lookie what we got here! >:D I think this conviced me to get it as next purchase!

PS: Carmine standard edition on the way to me! wohoo! >:D

PSS: Did you already abused the book for scanning? Since few pages are looking kind of overstreched XD

I folded it back a bit for that first picture, since I was planning to use it on the opening. It's all still intact \o/

Truthfully, I've had GGG6 over a month, and haven't been interested in reviewing it, so suffice to say I was kind of disappointed with it ~-~ I'll still try to get around to it though ^^;