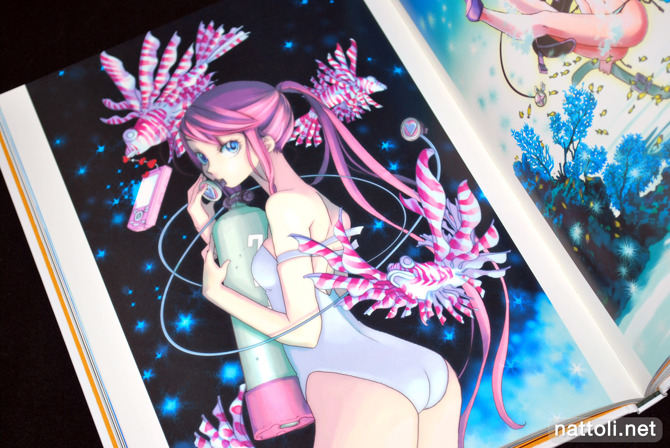 I should start this out by saying, I'm not a Kozue Amano fan. I've bought all of her books in the past, but they're some of the few art books that I've gone on to re-sell. But while I don't like Aria, Crescent Noise or Roman Club, I do like Amanchu! So I decided to give her latest book, BIRTH Amano Kozue Illustration Works IV a try. 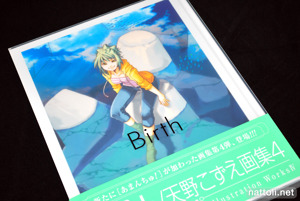 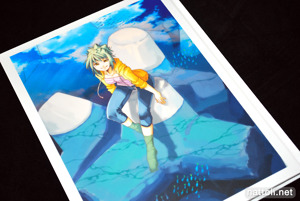 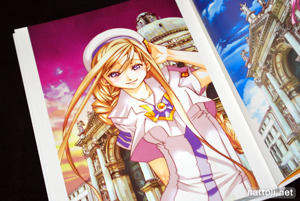 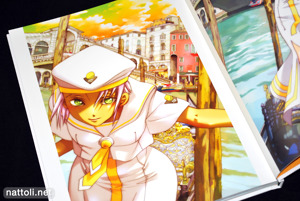 The presentation is great as usual, it's hard cover, A4-sized and comes in a plastic sheath, like the other books, that has the title text printed on to it. It's short for an art book with, 96-pages in total. The color portion of the art book ends on page 80. It's not printed with any page overlap, but there are several two-page spreads, so there are a few illustrations that get sucked into the page gutter.

Interestingly, many (but not all) of the single full-page illustrations have larger white inner margins, so they aren't negatively affected by the tight hardcover binding. BIRTH starts out with illustrations from Aria, and it covers a total of 42 pages. There are a few pages of chibi art works and zoomed-out architecture sceneries in this section. 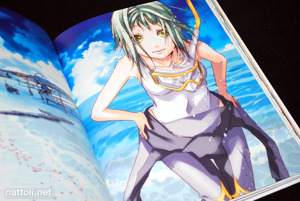 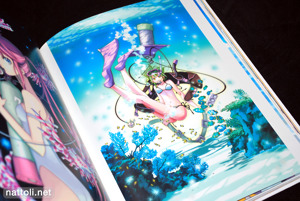 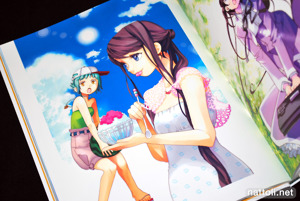 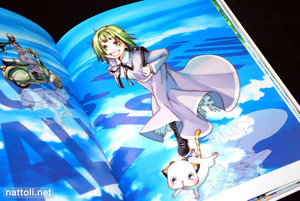 And finally to the section I bought it for ^^ The illustrations from Amanchu! run from pages 55 through 80 and are all in color. Though any fan of the series has seen all of the illustrations, it's nice to have them without text covering up the details.

Many of the series art works from the past year were excluded, but all of the arts works that were older than a year are in the book. Aside from the cover illustration, I don't believe any of the other works are new.

The monochrome illustration portion of BIRTH Amano Kozue Illustration Works IV is 9-pages long, followed by the index and a message for Amano Kozue which is another 6-pages. She gives her impressions for each illustration, though publication information isn't provided. I liked BIRTH a lot more than her previous books, so here's hoping for even less Aria in the future! And yeah, I know that's not the general opinion of people who would buy this ^^;

Yeeeeeeeeeees was waiting for this :D !! Altrough Its already on its way to me and as I see i did a good buy! :3 And iam glad to see there is less Aria then i expected since at the time i was ordering it there was no review of the content out. So i was abit worried (not that i hate Aria, nor i have any of her previous book so its in fact ok for me!) :D

PS: cdjapan is sending me CARMINE again for 0 Yen and they dont want me to send the defective one (well in fact "just" 8 pages missing) to them back! <3

PSS: As a total OFF topic question! What are youre toughts about Mandrakes used artbooks. Have any experience ? (guess u have considering the "About" how to buy doujinshis section) xD

Mandarake is good, the art books tend to have some wear, but nothing significant. I've never received a book from them with problems like a broken spine, torn pages, or stains. There is usually some wear, like the kind I get on my art books from shelving and un-shelving them or sometimes piling them unevenly, and near un-avoidable yellowing on older books. But that's generally the worst of it! Unless you have really bad luck :D

Oh I adore Kozue Amano, especially her Aria artworks so I immediately ordered this book when it was released. (Fedex tells me it's somewhere in transit to me. ^^;; )

Looks like a lot of the Aria illustrations are from the manga cover artworks and her latest poster book.

Quite looking forward to see her Amanchu! art in large print with crisp quality. てこ is <3 ^^

Although her reason is understandably, it's a shame Amanchu! has been pushed to a three-monthly release.

Yeah, considering the rate of Amanchu! I bet it's going to be a long while before we see another art book from her ^^;

You're thinking the volumes, but the quarterly schedule is for the serialization (just chapters) in Comic Blade because she's pregnant \o/

It's nice to see an actual review of the book out already.

Even as a huge ARIA fan, it's always nice to have something else to mix things up a bit.

I'll be ordering this book soon, I just spent the last week or so hunting down a brand new, unused copy of Cielo so I'm not going to hang around for like 4 years to buy Birth like I did with Cielo... never really understood why I didn't get it straight away like the others...

Thank you. I'm collecting Aria-related works since Aria the Avvenire is out, so this post is still extremely helpful even though it's been a few years :)