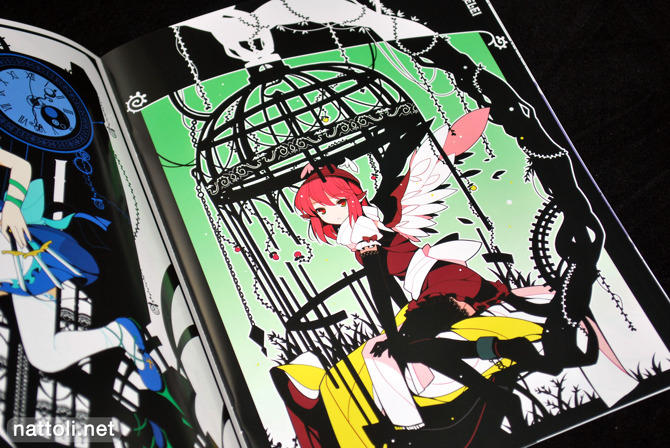 Ideolo's new Touhou doujinshi BLACK★ALBUM more or less starts up where his Comiket 78 volume, Carnival Fantasy left off, featuring many of the Touhou girls that weren't included in the previous book. Ideolo's designs are as beautiful as ever, this time combining his colorful palette with sharp black shadows and background designs. 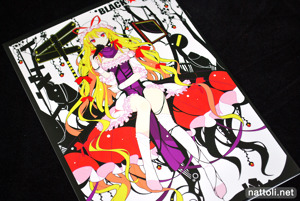 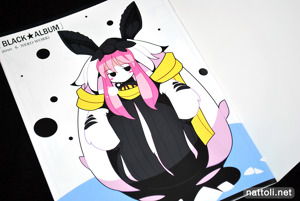 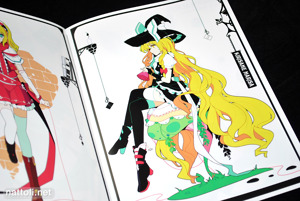 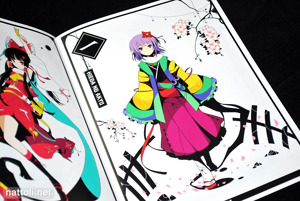 BLACK★ALBUM is B5-sized, staple-bound and 20-pages, not counting the covers. The beautiful cover art of Yakumo Yukari is surprisingly not included inside, but on the bright side, the illustration is not obscured by title text. Most of the illustrations feature single characters fit to a full page, though there are a few combination works. The collection starts and ends with Reisen Udongein Inaba.

Though the art is similar in style to Carnival Fantasy, the illustrations in BLACK★ALBUM seem even more stylized with the heavy contrast all the black creates. Ideolo has once again tweaked the costume designs for the characters, as you can see with Onozuka Komachi's no-sleeves look and face covering scarf, which instantly makes her look even more badass. Shinki's costume design by Ideolo should be the new standard, her original one looks too Christmas-y. 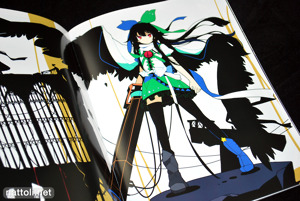 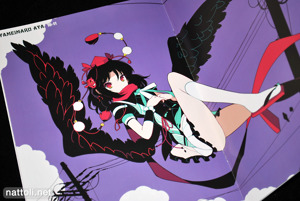 There are a total of three two-page spreads by Ideolo in BLACK★ALBUM, one featuring Aya Syameimaru, another with Reiuji Utsuho and Kaenbyou Rin (in silhouette) and the third with both Kazami Yuuki and Medicine Melancholy.

77gl is once again the guest artist for Ideolo, with an illustration featuring several of the Touhou girls. BLACK★ALBUM is another excellent collection from Neko Worki, and with Ideolo's creative designs, it almost makes Touhou feel new again ^^

Is there a doujin with only 77gl's artworks? It's a shame if there isn't any.

I like Ideolo's work on black and color contrast btw.

There is actually; came out after C78 and it sold out on Toranoana pretty quick. But that's the one to search for for now.