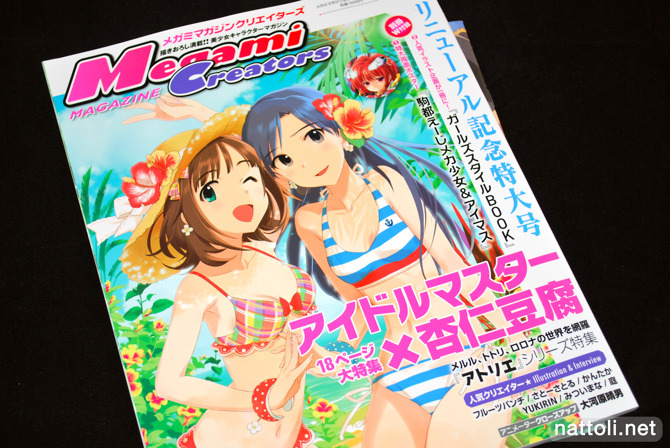 So it looks like after 22 issues of Megami Magazine Creators and a bit of a break, the publishers have decided to change things up a bit. Though the content has remained essentially the same for Megami Magazine Creators Vol. 23, the actual size format of the magazine has changed. It's still A4-size in height, but it's about an inch wider like Newtype Magazine. It's also gone up in price, from the standard ￥980 to ￥1200 an issue.

This issue included a double-sided B2-sized poster, with the magazine cover illustration on one side, and an original Mecha Musume by Eiji Komatsu on the other side. And while that is normally the only extra for the magazine, this time there's also a 24-page (covers included) booklet that contains an assortment of illustrations from previous Girl's Style sections. In all there are 21 illustrations, by as many artists. Just some of the many names included are Shimada Humikane, LLO, Kanzaki Hiro, Takamichi, and Gayarou.

The inside of Megami Magazine Creators Vol. 23 starts out with a feature on Annindoufu's art works and the new animated version of The iDOLMaSTER. If you're new to The iDOLMaSTER fandom you should check out Annindofu Illustration Works Brilliant Idol, it covers pretty much all of the promotional art work. In addition to the animation and Annindoufu art in this issue, there are also illustrations by Sakura Akami & Mori Kohichiro, Tsukigami Lunar, Yamane Masato, Yumehito Ueda, and Seiryu.

The next 8-pages are previews and character illustrations for Atelier Meruru, followed by spreads for Quiz Academy and Eiji Komatsu's poster illustration. The featured animator in this issue is Ogawara Haruo (大河原 晴男) with character designs from Hoshizora e Kakaru Hashi and Tayutama -Kiss on my Deity-.

The rest of the regular features were all there, like the Queen's Blade original illustration and the preview for the next character release along with the Queen's Gate BlazBlue Noel Vermillion Book. The Flower Road featured artist is Niwa, with a 4-page article and a new illustration. And Shaa's closing illustration was once again in color. The Girl's Avenue section in Megami Magazine Creators Vol. 23 was a bit of a let down with only rather well-known artists, and the Girl's Style section was more or less replaced by the repeats in the booklet and The iDOLMaSTER works. Hopefully they'll both be back on track in the next issue!