The Art of PSG Vol. 1 Collection of Initial Design 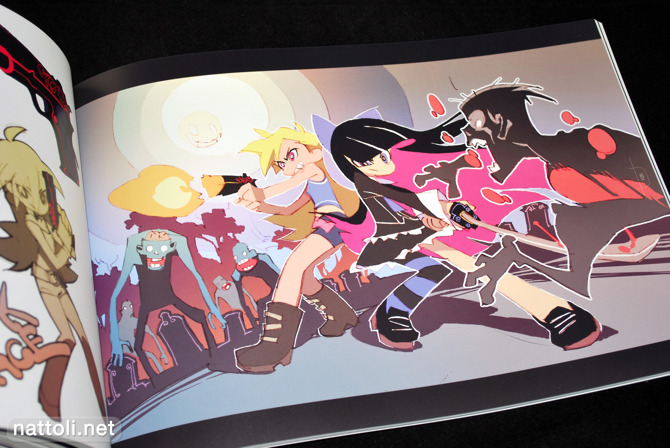 Though anime sometimes feels like a flash in the pan, I do like to collect anime sketch and concept art books for shows I enjoyed for any particular season. The Art of PSG Vol. 1 Collection of Initial Design is one such book, featuring the early designs for the characters of Panty & Stocking with Garterbelt. Though there are some color illustrations, the majority of the book is penciled line art, but it gives real insight into the creative process behind the show's unique character designs.

The Art of PSG Vol. 1 Collection of Initial Design was released at Comiket 79, and it's an A4-sized book though it has a landscape orientation. It's 150-pages including the covers, with around 24-pages in color. The contents are organized by artists, which include Atsushi Nishigori, Hiroyuki Imaishi, You Yoshinari, and Shigeto Koyama who have grouped together for the series composition under the name GEEK FLEET. Atsushi Nishigori as the character designer, has the largest section in the book, going from pages 5 through 70.

All of the above illustrations are by Atsushi Nishigori. The color pages show a much more finished character design for Panty and Stocking, but many of the pencil sketches have a drastically different look, like this short-haired version of Panty that appears on a few pages. The concept arts for Stocking were pretty close to the finished look through out, with the main differences being a version without eyebrow-concealing bangs and a version without a gothic lolita dress style. Also, Scanty and Kneesocks started out looking more cute than tough ^^; 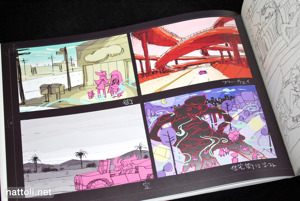 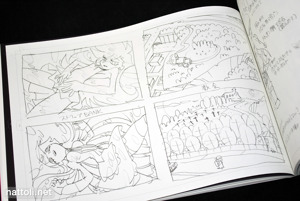 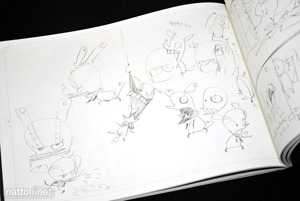 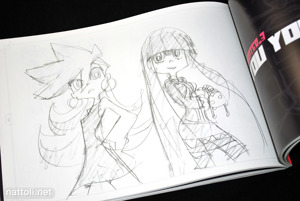 The next artist is Hiroyuki Imaishi, whose chapter runs from pages 71 through 100. I think animation artists have distinctive styles, but Hiroyuki Imaishi's style is even recognizable when you're not looking for it. Check out this video for his some of his key scene animations, and you'll see the pattern ^^ His illustrations in The Art of PSG Vol. 1 Collection of Initial Design are a lot more scribbled than Atsushi Nishigori's, but his storyboard illustrations are intact.

You Yoshinari is the artist for the third chapter, which starts out with seven pages of color illustrations including the opening photo for this review. There are concept arts for Garterbelt and the pink Hummer, which actually has a name, See-Through. And there are also three pages of conceptual story boards in color. The penciled character designs in You Yoshinari's section differ greatly from the final result, but that's what makes them so interesting! 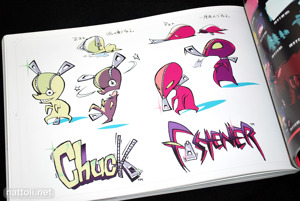 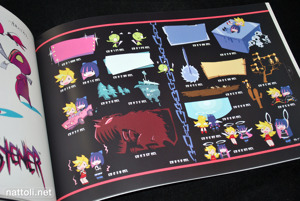 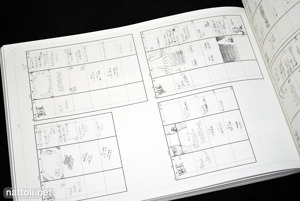 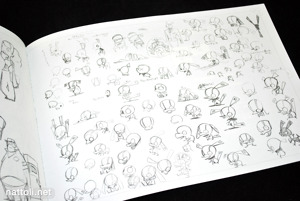 Shigeto Koyama's section is the fourth and final chapter featured on pages 133 through 147, with the main feature being the ending sequence designs for Panty and Stocking, along with color versions of Chuck and Fastener. I really enjoyed The Art of PSG Vol. 1 Collection of Initial Design, it's a great glimpse into the creative process for the anime all in a well-made book. Though it can be hard to find, it does appear from time to time on auction websites, so it's worth looking if you're interested!