Ayakura Juu Illustrations Spice and Wolf is available on Amazon 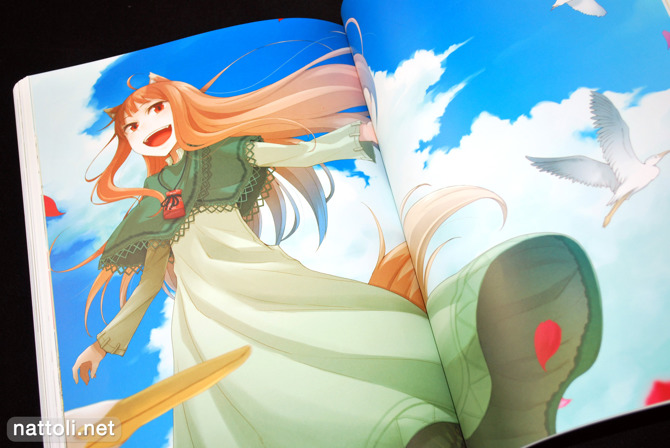 Ayakura Juu Illustrations Spice and Wolf marks the first art book by the artist, and the most comprehensive collection of Spice and Wolf art work to date. The slip on book obi boasts an incredible 400 illustrations, and while technically true, that's counting a lot of back cover pictures of apples and coins along with small monochrome thumbnails into that total. In fact, if you also purchased Rainbow Spectrum: Colors Haimura Kiyotaka Illustrations you'll experience a slight sense of déjà vu as the two books utilise a rather similar layout to bring together the monochrome and color works from the light novels and other media. But Spice and Wolf does it better on the whole.

Ayakura Juu Illustrations Spice and Wolf is an A4-sized art book and 204-pages in length. The cover is newly drawn, as is the first illustration inside, with Lawrence embracing Horo. There are several two-page spreads, but none of the illustrations are printed with overlap. 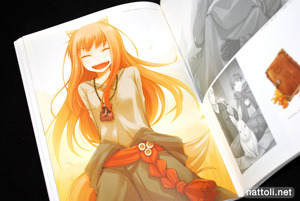 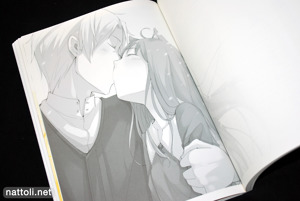 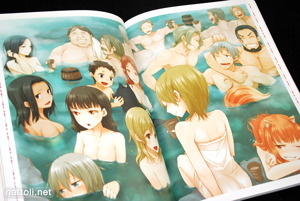 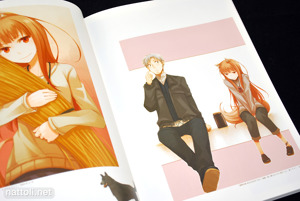 Even though the last volume of Spice and Wolf also came out in July, the cover illustration from volume 17 is still included in the book, along with other illustrations from the epilogue, including some spoiler-ish ones I won't mention. Another of the book exclusive illustrations features pretty much the entire cast of Spice and Wolf bathing in the hot springs. It appears after the two-page interview with Ayakura Juu in the center of the book, and really feels like it wraps things up!

More of the illustrations that accompanied the television show merchandise appear in the latter half of the book, including the small illustrations from the anime ending sequences. The Blu-Ray cover illustrations are especially nice, but the DVD ones are included as well. The Spice and Wolf covers for past issues of Dengeki Bunko Magazine were also included, which are quite hard to come by at this point.

There are about 10 pages of illustrations from the Nintendo DS Spice and Wolf game, and they're all gathered together. There isn't really a consistent order to the illustrations, so you may have to skip around quite a bit to find what you're looking for. There are also some modern-day Horo illustrations, with her in a school uniform and other present day clothing that were featured in Dengeki Bunko Magazine. 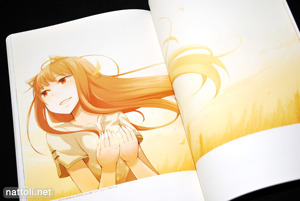 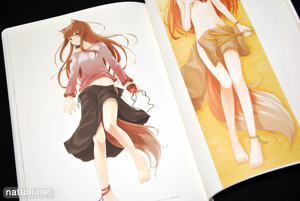 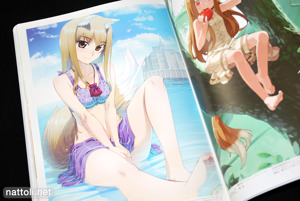 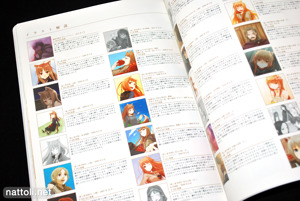 There are two guest illustrations at the end, one by Koume Keito and the other by Yasu. I thought the Yasu connection was neat, because Ayakura Juu was one of the guest artists for his art book, Yasu Illustrations. There's a 4-page illustrator's comments index, which includes Ayakura Juu's insights on selected works. Even though it had its fair share of small sized illustrations, Ayakura Juu Illustrations Spice and Wolf really is an excellent collection, concentrating the majority of full-page and two-page spread illustrations on Horo, which I'd guess is what most of us were hoping for ^^

Thanks for the review, I guess the only thing left for me to do is to order it :)

You're welcome! :) Heh, it's not too bad a spoiler, you may have even guessed it by now just being on the internets!

I am so ridiculously excited to get this book! Of course NOW it's on Amazon Japan after I went on a wild goose chase for it. Haha. :D Thanks for the pics!

It's worth waiting if you want to get it off of Amazon. Even when the pre-orders aren't up early, they're always there by the release date. Saves on shipping from multiple places in my experience ^^

Thanks so much for the awesome review. I've been waiting so long for a Spice and Wolf artbook and from the looks of it, it didn't disappoint. Holo is so sweet >_<

aww thx for the review. Hope I can still get a copy from cdjapan xD

Thanks for the review, because I wanted to get this artbook before, but now I want it even more. The only thing that I was feared of is the spoiler that you mention, but as FFenril says, waiting five years or more to get the end of the ln... Well, if the spoilers are at the end, I can just not look at them, are they ?

They're kind of scattered through out the book, mostly close to the center. But actually, if you've seen the last volume cover, then you've been spoiled anyway... so yeah :) It's just more of that.

Okay then I don't have anything more to fear ahahah. I don't know if I should be happy or sad though, but oh well, I've just ordered it now. Thanks again~

It's a incredibly gorgeous artbook, congratulations. The price is out of my reach unfortunately.