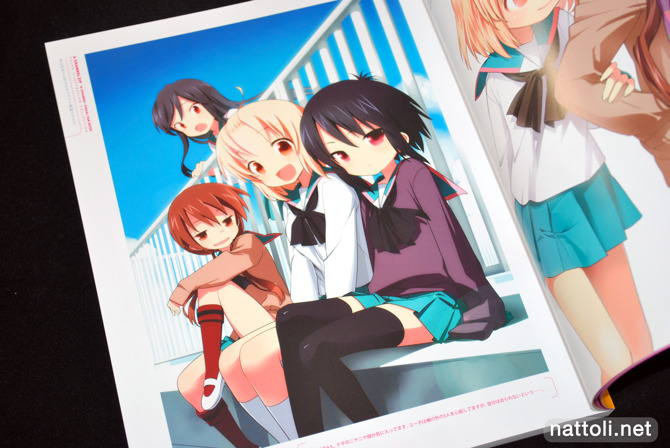 It's always a tough call when buying something with a subtitle of "visual fan book." There doesn't seem to be any one definition for it, and they can have anywhere from a few to a lot of illustrations. Thankfully, A CHANNEL.ZIP Visual Fan Book was one of those that had a lot of illustrations... though not as much as a normal art book.

A CHANNEL.ZIP Visual Fan Book is a softcover B5-sized book with 96-pages, of which roughly half are dedicated to the gallery. This book focuses entirely on the 4-Koma manga, and not the anime. There is a visual guide book out later this month for the anime series though, if that's your thing.

For the most part, the illustrations are featured full-to-page, though they're also printed with white inner margins. There's only one two-page spread illustration, and further into the gallery, there are also some half-page illustrations.

The gallery section, titled Color Illustration Collection also includes some rough sketches, along with full-color versions of the 4-Koma manga. That accounts for about 8-pages in total and ends the 'visual' selection in the book. From page 49 onward is the 'fan' part.

The 'fan' section starts out with Characters introducing the four main girls and including some of the manga panels so you can get an idea of their personalities. It also includes favorite scenes for each girl. 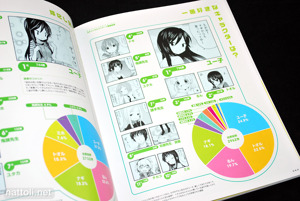 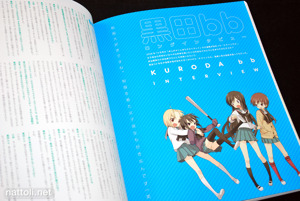 After the Characters section is Questionnaire & Reader's Comment. This section is only 6-pages, but includes some polls on the characters. The book ends with an interview with Kuroda bb. A CHANNEL.ZIP Visual Fan Book is nice overall, and it's priced right for its content at ￥2000. It'd be an easy purchase for fans, but past that I'd hold onto the glimmering hope that Kuroda bb would someday just release a self-titled collection ^^

can i put some of your work under your name and your copyrights?

Sure, if you visibly link back directly to the review article you've taken photos or text from on the same page.