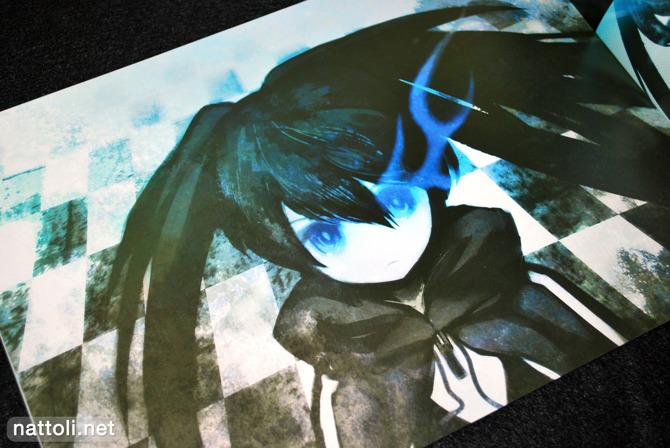 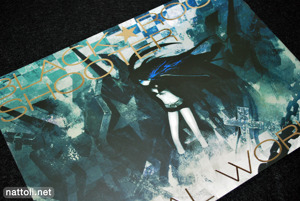 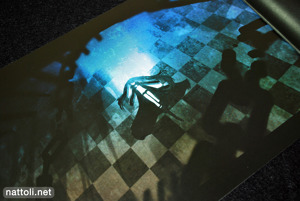 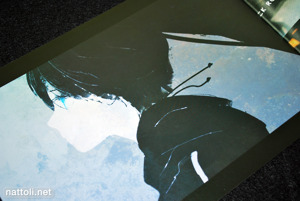 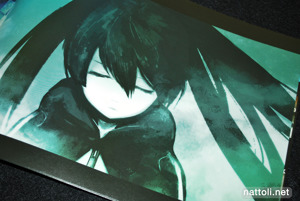 So it's only appropriate to start with a review of Huke's Comiket 75 release BLACK★ROCK SHOOTER Visual Works. It's essentially the printed version of the art from the BLACK★ROCK SHOOTER music video. Basically, if you like the art in the video, you'll love this book, as it features all the main still frames in very high quality.

One of the signature styles in BLACK★ROCK SHOOTER art is the checkered floor and walls. It even appears with the stunning figure version of BLACK★ROCK SHOOTER. The video art work has for the most part a halftone pattern over it, but you'll be pleased to know that's omitted in the book art work.

The use of dark colors, and limited color schemes on the pictures just makes the dynamic flaming blue eye stand out even more. It's great too that every image has a background, no matter how simple.

There are 28 pages in total, not including the covers, and the book is staple bound. It's also unique in that it opens long-ways presenting more of a widescreen video format to the illustrations, which was how they were meant to be viewed in the first place. Most of the art works fill the full page, though there are others that are tiled in video-like frames that include the halftone pattern---but none of those are full page images and there are only three pages like that, to create a sense of motion leading up to the next illustration.

The end of the book includes concept design illustrations, so you can see how the Black Rock Shooter costume is made up, and also her weapons; the Black Blade and the Rock Cannon. 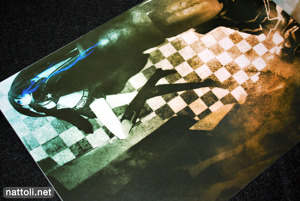 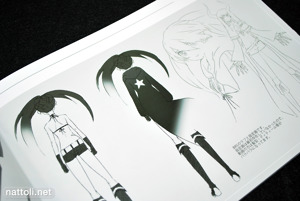 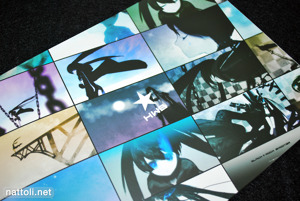 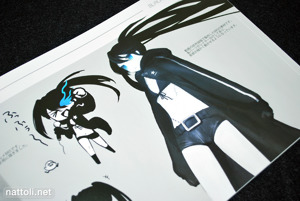 What is it about BLACK★ROCK SHOOTER that you think made it so successful? When you think about it, there's not much to it, it's a song and a video. But from that sprung lots of merchandise from T-shirts and mugs, to figures to an anime Blu-Ray/DVD with the promise of a series. Maybe it's that in the fluffy world of Vocaloids, Black Rock Shooter is the polar opposite. Would love to hear your insight!

And here's the video that started it all, in case you haven't seen it ^^

This is the best black rock shooter artbook out there! It's really hot! Art is splendid, so are the great backgrounds! Thanks!

Not available on amazon?

Nope, basically, everything under the category "doujinshi" isn't something you can buy on Amazon. You have to order them using deputy shops, or get them used from places like Mandarake.

And maybe even someday, someone will start selling them direct! :D

At my last con I did find a booth selling doujinshi and they have an international website:http://manga-pal.jp/

They don't have much stuff though. I can only recommend getting Shiitake's art collection. It's the only good thing they have ^^;, and that I bought at the con.

Hopefully they'll expand in the future, they need a lot more variety than that to really bring in customers... ~_~

Lots of blue, chains, metal textures. It's a nice book

Very visually pleasing, but in the little movie its weird how the pictures "move". I think it could go somewhere tho.

I actually saw these scans before this post...and dang they were gorgeous XD. Difficult to wall though...not much left for you to do.