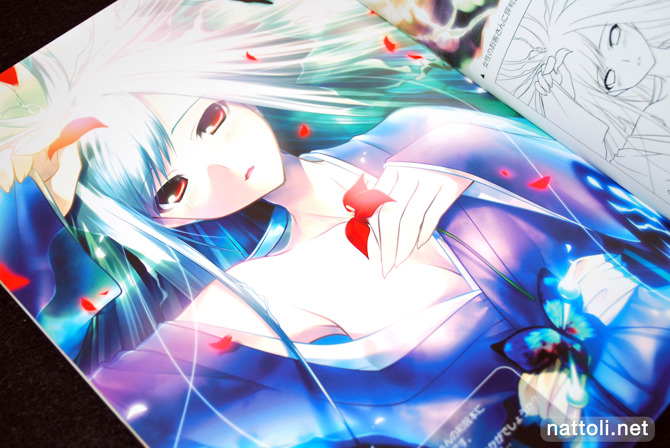 Mitsuishi Shona's Relaxation Switch COLORS.001 came out during Comiket 75, and was the first full cover doujinshi by the artist. Shona's works look like they could come straight out of a series like ef - a tale of memories, with the way her illustrations shimmer and shine, along with the surreal background scenes for her characters.

The cover illustration wraps around this doujinshi, featuring a full mermaid picture that also appears as one of the wallpapers with her release. On the last page of the book, there's a website address given that isn't linked on her website to a series of 8 wallpapers in resolutions up to 1920 x 1200, all of which appear as printed images in the book. 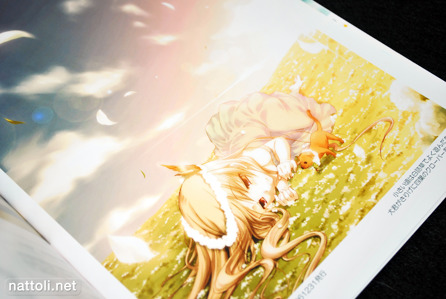 This picture instantly made me think of CLANNAD. The field, dress, and hair all just remind me of "the girl in the other world" even if that's not who it's supposed to be.

The presentation for the most part follows a pattern of showing the full, colored-in art work followed by (or next to) the line art, and sometimes concept sketch of the illustration. The pages also include Mitsuishi Shona's comments on the drawing, so there isn't a need for an index. Though it's not done for every illustration, it's done for most of them. 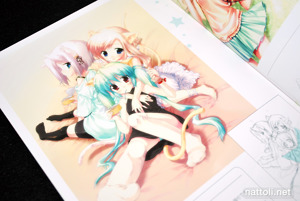 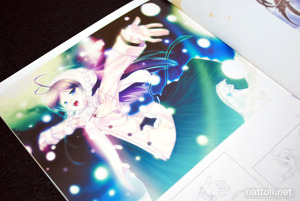 Relaxation Switch COLORS.001 is 32 pages in length, without including the covers. It's pretty evenly split between illustrations that occupy a full page and ones that don't. But even when it's a full page illustration, most of the illustrations have a little text box commentary over the picture. 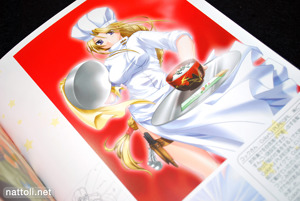 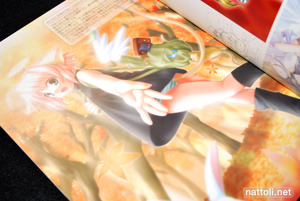 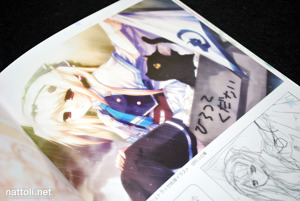 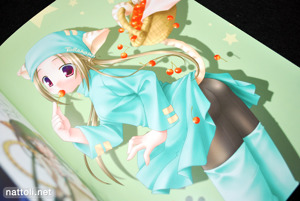 Even though it's all the same artist, there really are a couple of different styles throughout the book, though I prefer the glowing KEY/Minori Studio kind of look. The book has about 33 illustrations in total, and three of them are by guest artists. The art work dates anywhere from 2005 to 2008, but it's not in chronological order.

I didn't recognize any of the guest artists (above right), but the illustrations were alright. I wonder how the practice of having guest artists came about, is it about filling pages or getting the work of others out there? 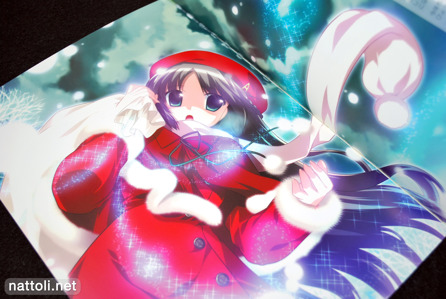 Even though this was available for Comiket 75, and I saw it at the time, I skipped over it because I didn't like the cover ^^; I eventually bought it over the summer after seeing more preview images of the insides. Overall, I don't think the way Mitsuishi Shona draws girls is particularly original, but the coloring and sparkle of her illustrations gives them an edge.

This book looks awesome, don't suppose I could still get it somewhere?

Wow, that's seriously changed, and not for the better! Thanks for the link!!!