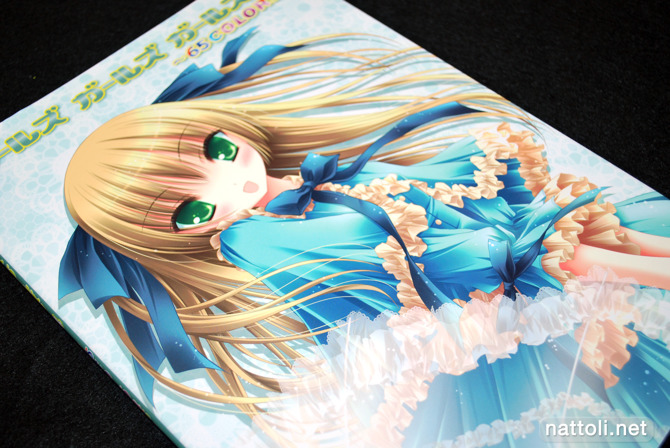 The newest pretty girls collection from E☆2 (Etsu), Girls Girls Girls!4 Illustrations was just released a few days ago in Japan, and it continues to be what we expect from the Girls Girls Girls! series of art books. It features a great assortment of artists ranging from the well known to the virtually unknown. 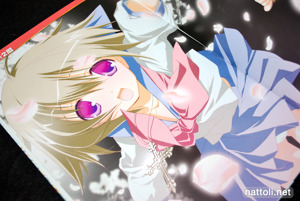 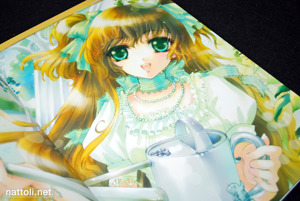 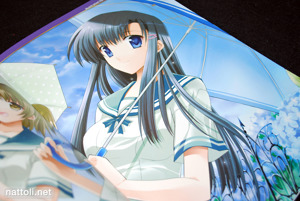 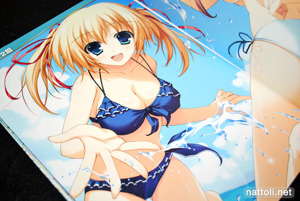 The cover art is new and by Tinkle, but like with other Girls Girls Girls! books, that's the only new illustration, the rest have previously appeared in volumes of the E☆2 (Etsu) magazine. 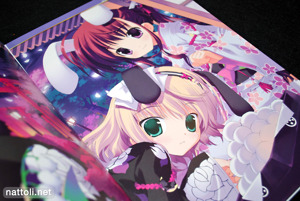 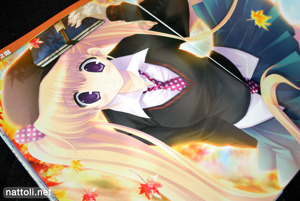 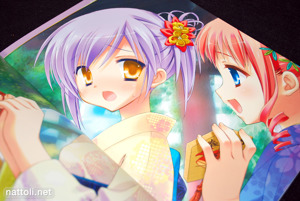 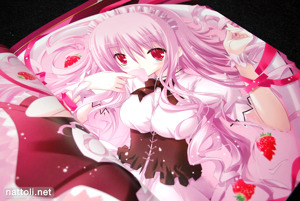 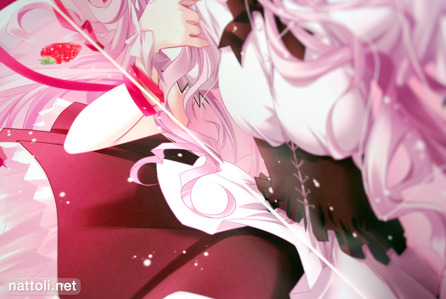 I thought I'd point out too that this book was published with a white buffer zone and a tiny bit of image overlap. Though it doesn't make a huge difference, because there aren't that many two page spread images, it is nice when the publishers consider that the illustrations all to often get sucked into the binding. You can see what I mean in the picture above.

The first section features illustrations of girls in a state of undress, or being exposed. Seems pretty standard for a book like this, but that's actually the theme! That theme kind of blends into the second section as well. But that style of illustration pretty much occupies 25 pages of the book. Ryo Ueda appears 3 times in this section, all with the same girl in various stages of undress. Also, there are a couple of pictures with nudity/completely see-through clothing, so be aware. 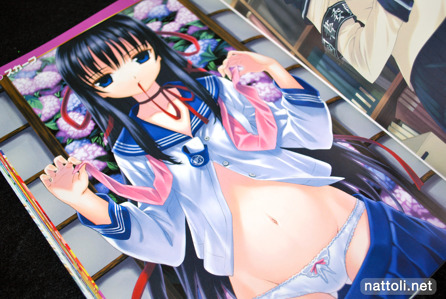 Singling out a delicious Matsuryu illustration, because it deserves your attention. Too bad this artist hasn't put out doujinshi in years. 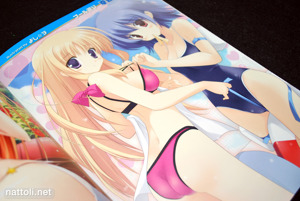 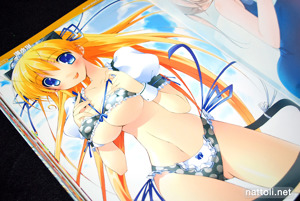 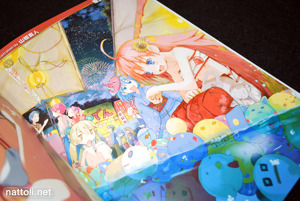 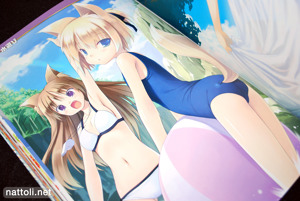 Pages 51 through 60 have a "Summer Girls" theme, so all the illustrations are of girls in swimsuits, or sundresses keeping cool and holding popsicles. Would have preferred more illustrations along this theme than the previous one, but I know I'm not exactly the target audience for this book. There's an illustration by Poko in this section of the little fox-tailed girl he (or she) often draws, wearing a swimsuit. 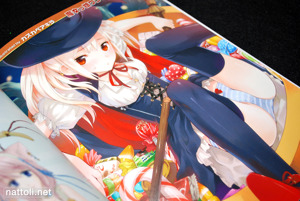 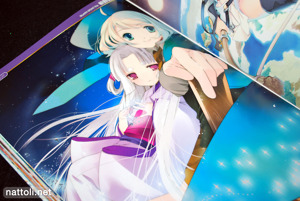 Next up is my favorite section, featuring a Magical Girls in "Wonderland" theme, from pages 61 to 73. I'm not sure if I like the section more because of the theme, or because it features some of my favorite artists :3 It opens with a lovely witch by Kasukabe Akira followed with another nice one by Kirino Kasumu, whose work I can't ever seem to find enough of! 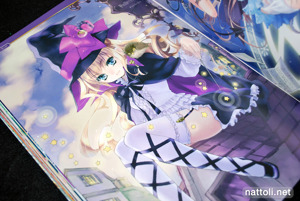 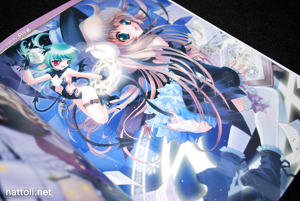 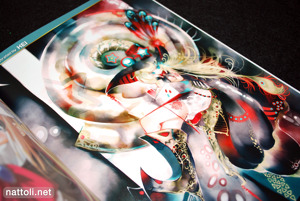 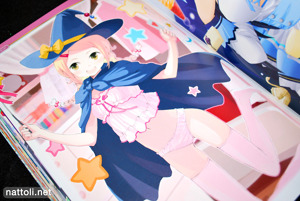 Also featured in this section is another illustration by A=g which fits in quite nicely by the art work of Kaya Kuramoto. Another couple of standout illustrations are an elaborate witch by KEI, and an adorable one by Kishida Mel, who keeps his girls modest with camisoles instead of bras ;D

The last section of illustrations feature girls with tails and ears, and not just inumimi and nekomimi, there are some wild animals in this bunch. Hato RAMI contributes a cheetah girl, there's a racoon, and of course Izumi Sakurazawa drew an inumimi. There are thirteen of these illustrations in total. If you're curious about the names of any of the artists for the images pictured, just click on the picture, the title is the artist's name.

I'm pretty happy overall with this Girls Girls Girls!4 Illustrations collection, though I would have enjoyed more of the creative themes like magical girls, and the animal girls. I really think it lets the artist show off their skills a lot more than the standard moe girl undressing, but we all know what sells.

It looks very good, nice collection of good artist again ^^ and you don't really look out for any new illustration anyway in these, there are so little scan of Etsu on the web and people doesn't import much the magazine for the art since it's mainly manga. Mine will only arrive with the 100 bishoujo.

Also, this remind me that I forgot the DTP part for my article. Good publication should always look out for the binding sucking picture.

That's true, aside from Pireze (who just happens to have one up now XD), I haven't seen many scans from Etsu, so those pictures were mostly new to me :D My Amazon stuff tends to get really split up. Believe it or not, I ordered this with the 100 Masters of Bishojo Painting book, but it's all coming separately.

What's DTP stand for in this case? :D

Desktop Publishing. It's a the type of software used to layout the content for print job, be it books, magazine, news paper...

I guess I could have them separately but it seems expensive by EMS ^^;

Thanks for the review. It's so hard to find decent reviews of anime artbooks these days. I've been thinking about ordering a few artbooks from amazon in the near future, and I'll definitely consider getting this one.

I don't have the other ones, but there's a bit of a review here with a lot of pictures by Saa-chan for Girls Girls Girls!2 http://www.animepaper.net/groups/artbooks/65133/4/#ID883513

Great review and it's good to see the book has so much amazing art in it!

Had earlier heard from Merun about this book coming out, but I like to have a peek at what's inside first through reviews or from people who already have the book before actually getting it (limited budget so have to choose wisely).

Only spot it at Amazon JP in stock, but they of course ran out of the Queen's Gate Mina book. Why must the items I want always be in stock at separate stores? ^^;;

So you have to kill yourself with shipping LOL

You can always wait on that kind of thing though. I place orders for stuff months in advance, and combine it with other things that are coming out sooner. Amazon then ships as it receives the items in stock, so I don't get "killed" with shipping costs. Besides, EMS is as expensive, and often more.

I only use SAL if I don't care if I receive the art book or not, which isn't often. If you can't afford shipping, don't import. But realistically, you end up paying it either way with import shops, as they add it to their price tags along with their profit margins.

First of all congratulations to your great blog, it's a real pleasure to read through your reviews and I love your blog layout! Keep up the great work!

Also as for Matsuryu in case you're interested to know, he does still participate with ASTRO CREEP on events. Last one been Comiket76 (summer this year) whereat he published another Copyshi (much in the same style as back at C75) through his Circle ASTRO CREEP. So, Matsuryu is still active in terms of Doujin producing but it coevally is less obvious in the midst of event release craze with the (in comparison to his Offset Doujin releases some years ago) more stealth/limited publication.

Oh cool, thanks for the info! :D I never seem to spot the recent stuff listed on Yahoo Japan or anywhere else really ~_~ Nice site too! I just recently picked up a few doujinshi by refeia too, I hope to review them sooner or later but they were less exciting when I found out they were all sketches ^^;