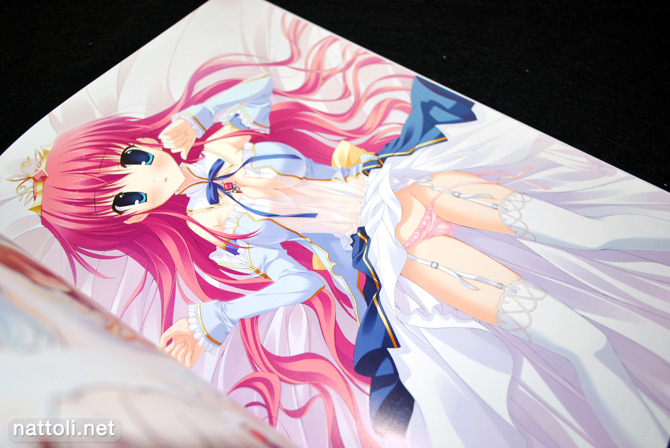 MOONSTONE Complete Illustrations was just released on December 2, 2009, and features a compilation of all the MOONSTONE promotional art work for their video games over the years. It doesn't include any of the in-game CG art work that you would usually find in a game visual book, which is a huge plus in my book. 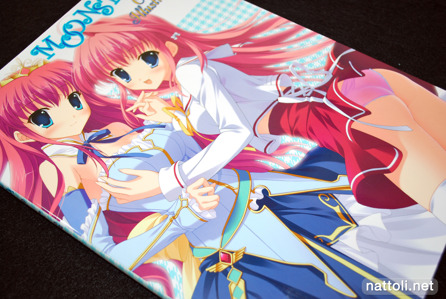 The art book is A4 sized and 130 pages in length, covering a total of eight MOONSTONE game series all the way from Ashita Deatta Shoujo („Āā„Āó„ĀüŚáļťÄĘ„Ā£„ĀüŚįĎŚ•≥) to the newest Marginal Skip („Éě„āł„āĻ„ā≠).

The first game featured is the oldest, Ashita Deatta Shoujo („Āā„Āó„ĀüŚáļťÄĘ„Ā£„ĀüŚįĎŚ•≥) which came out May 30th, 2003. There are six pages dedicated to the game, and two of those are full page illustrations. One thing you notice right away with MOONSTONE Complete Illustrations is that it's more about including all the illustrations than presenting them at their best. That's my nice way of saying there are some thumbnail sized pictures in this book ^^; 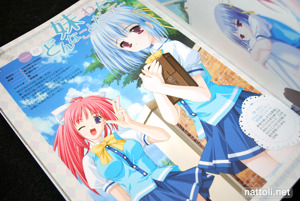 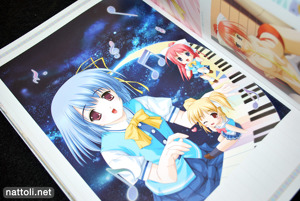 Next up are the illustrations from Imouto Watashi, Donna Koto Datte (Ś¶Ļ„ÄÄ„āŹ„Āü„Āó „Ā©„āď„Ā™„Āď„Ā®„Ā†„Ā£„Ā¶). This is easily the most adult section in the book, but it only lasts for six pages and a total of 10 illustrations. This game is also on the older side, having been released November 28th, 2003.

The last non-Mitha influenced game featured is Doko He Iku No , Ano Nichi (šĹēŚá¶„ĀłŤ°Ć„ĀŹ„Āģ„ÄĀ„Āā„Āģśó•), and it's the largest of the older game sections with a total of 14 pages. There's a bit of nudity in this section, but nothing as bad as the last section.

Gift is the next game featured, which also welcomes in the beginning of Mitha's character designs. Though Gift was first released in 2005, the designs stay fresh and familiar with Mitha's continued influence in MOONSTONE. The game's popularity continues too, as it was re-released in April 2009 for the iPod. Though there are a lot of illustrations in this 24-page section, as many as nine illustrations are squeezed onto a page, making it look more like a thumbnail index than an art book page. Then again, those two pages I'm referring to are all art from telecards, so maybe it's intentional. 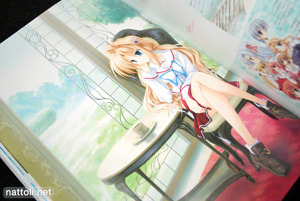 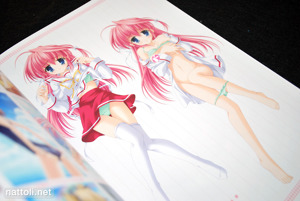 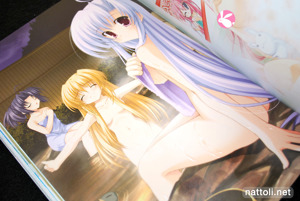 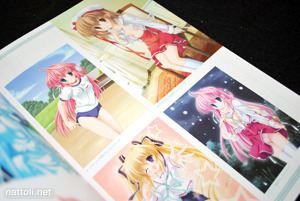 Art work from a limited dakimakura, as well as Dengeki Hime and Comptiq Magazine exclusive illustrations are also printed. Gift Nijirio Stories gets a separate section from Gift, but it's just eight pages in total.

Clear and Clear Crystal Stories („āĮ„É™„āĻ„āŅ„Éę„āĻ„Éą„Éľ„É™„Éľ„āļ) take up 20 and 6 pages respectively. These sections also have a lot of illustrations that previously were only in the magazines they were initially published in. I suspect some of the illustrations would have been in the game visual book as well though. 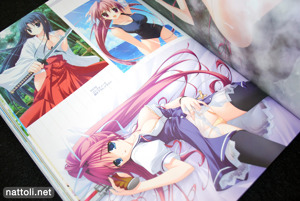 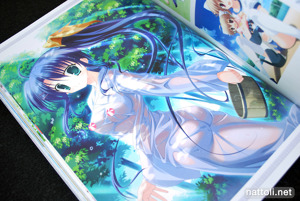 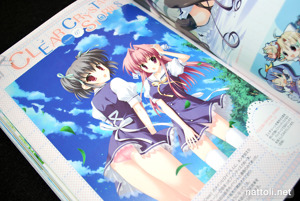 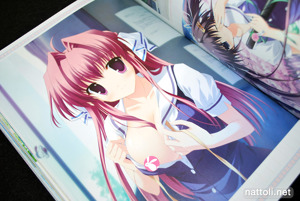 The art work is great, but the layout of this book really makes me feel that it was more about quantity that quality with the way they gave so many illustrations such a tiny amount of space. I dunno, maybe it doesn't bother some people.

The last section is the newest game, Marginal Skip („Éě„āł„āĻ„ā≠). The school uniforms in this one are so similar to Gift that I had to do a double take to check the differences :P There are 20 pages dedicated to Marginal Skip, but if you're really interested in this game, I'd suggest going for the Marginal Skip Offical Fan Book that came out last month.

The book ends with a selection of monochrome sketch illustrations of art work that was featured in the book and a couple pages of color art work that MOONSTONE did for PUSH Magazine. There isn't a thumbnail section, instead the publication information is provided next to or below each of the images. So in summary, this 130-page book includes 114 pages of full color images, and even more illustrations than that due to the page layouts. MOONSTONE Complete Illustrations really manages to pack a lot in for its price of ÔŅ• 2,800.

I think I just learned that Moonstone had other artist than Mitha ^^;. And it's indeed, a complete illustrations book if everything is in there lol. Guess I was right to skip it; I was already a bit disappointed with the Pixiv 2009 book filled with small illustrations.

Wow a lot of panty shots! Too rich for my blood but good review anyway :)

Wow lovely colors, great art, think im gonna pull the trigger on this one, thanks!

Hehe, I really enjoy how differently we all react to the same review. Sometimes, I feel like I'm not showing the book in its best light, and other times, I wonder how people can like something I felt I blatantly disliked in a review. But I guess that's the point of a review, the info just needs to be out there and then we can all make up our own minds ^^

Too bad about the small images...I love your new site! I still will probably purchase it and the Marginal Skip fan book, as I am a fan of moonstone ^^;

BTW...was there ever an artbook for Lyrical Lyric and I know it has nothing to do with Moonstone I have looked and have wondered if I missed it...or there never was one...