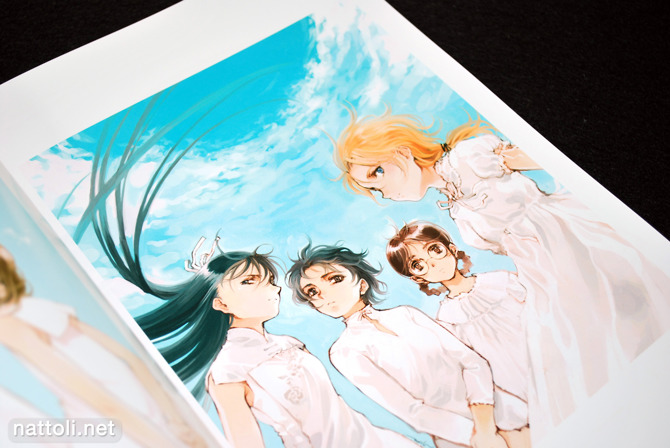 So that we all start on the same page, NOCCHI is a pen name for Oyari Ashito. It's interesting that he would use his pen name on the October 17th, 2009 release of 「北へ。」NOCCHI ART WORKS, but will be using his real name for the December 22nd release of Oyari Ashito Illustrations Chronicle (大槍葦人画集 Chronicle). I suspect the reason is a reflection on the contents of the book; the vast majority of 「北へ。」NOCCHI ART WORKS is identical to the earlier release, LITTLE WHITE—「北へ。」Fashion Book NOCCHI. I would guess that for all intents and purposes, he was better known as NOCCHI when he was working on 「北へ。」and felt it should be published that way.

If you already have LITTLE WHITE—「北へ。」Fashion Book NOCCHI I would recommend really giving it some thought before buying this book. Aside from a different organization of the art work, and how it's laid out, the illustrations are all pretty much the same.

The 「北へ。」White Illumination section makes up the first 110 pages of the book, which was also the only part of the series covered in LITTLE WHITE—「北へ。」Fashion Book NOCCHI. Of these, I'd say the first 67 pages are high quality, group and detailed illustrations that you'd expect from an art book. Though the first 16 pages are a character profile image next to a full page portrait illustration, the profile pictures are really well done.

Many of the illustrations are spread over two pages, but when they're not, the majority get a full page to themselves. I first became interested in Oyari Ashito's art works in the late '90s through Newtype Magazine. He used have an illustration or comic at the end of each issue for a while, and it was also coincidentally at the same time I started buying Newtype Magazine regularly, so it made an impact on me as a non-anime related artist.

After the more finished illustrations portion of the 「北へ。」White Illumination there are about 8 pages of monochrome sketch illustrations, followed by colored--but still sketch style--illustrations. These 20 or so pages cover the "fashions" of the girls through out the game, modeling the same piece of clothing front and back. You can see what I mean in the top row pictures above.

The last part of the book is essentially a different part of the 「北へ。」 series. It's subtitle is 「北へ。」~Diamond Dust~ and features the characters you'd be familiar with if you'd watched 「北へ。」~Diamond Dust Drops~. These illustrations are new, and follow the same format as the ones in the beginning of the White Illumination section; a profile picture page next to a portrait picture page for each of the girls. There aren't any black and white sketches in this portion of the book. 「北へ。」~Diamond Dust~ takes up about 34 pages of this book 144 page book and is essentially the new part of the art book that wasn't already published in LITTLE WHITE—「北へ。」Fashion Book NOCCHI. Much like the in the earlier section of the book, there are several "fashion" pages, with more rough, but colored illustrations of the girls in different outfits. 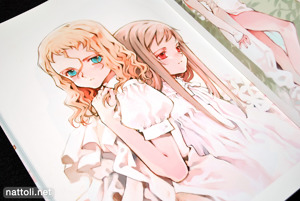 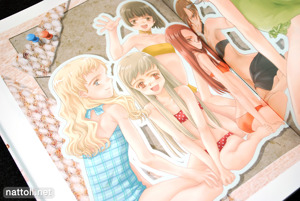 When I bought this book, I had an idea that a lot of it would be repeated from the earlier NOCCHI art book, but I didn't realize just how much. I also felt a little misled because most of the advertisements for it focused on the newer illustrations in the 「北へ。」~Diamond Dust~, making me think there was more to that section than there actually was. I don't dislike the art work, but it's really grown tired. I've seen it too many times, and have multiple publications with it, and this book didn't really offer anything new. I have great expectations for the newly released Oyari Ashito Illustrations Chronicle (大槍葦人画集 Chronicle) so unless you're a huge 「北へ。」you're better off saving your money and passing on 「北へ。」NOCCHI ART WORKS.

Nice presentation, not a fan of this kind of art, feels pretty old style compared to more contemporary artists!

Looks like good quality color but a lot of black and white, I think I'll pass on this one.