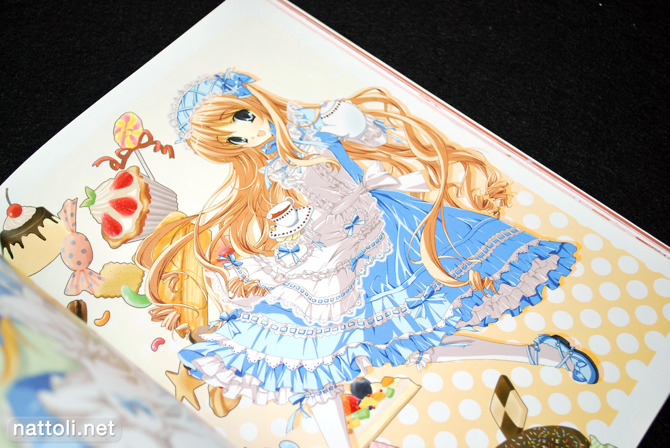 If you've ever wanted a book filled with anime-styled girls in frilly lolita dresses, well, this one's for you. Nouvelle Vague: Yukiwo Art Work Collection sticks firmly to the path of lolita dresses, with a smattering of the Melonbooks mascot Melon-chan, and the immortal Alice in Wonderland. Though the art book came out in July 2006, it is currently out of print so you'll have to find it second hand.

Nouvelle Vague is 154 pages, of which 98 are full color. Considering I buy art books that have 96 pages in total, I don't feel short-changed by the amount of black and white pages in this book because it really make full use of the color ones. The majority of the illustrations each get a full page display, but it should be noted that this book is B5 in size, which is a more common size for doujinshi than art books.

Yukiwo does a great job illustrating the clothing, though you can tell some illustrations receive a lot more attention than others as far as the details go. I like the art nouveau-styled illustration in the bottom row center, but it's not a look he repeats in this book. 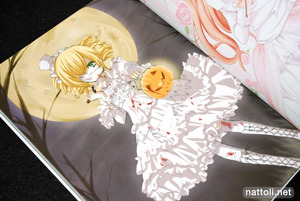 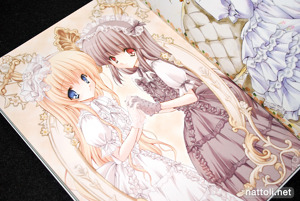 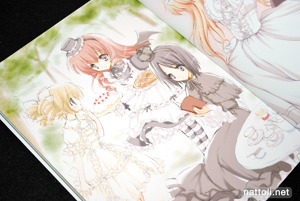 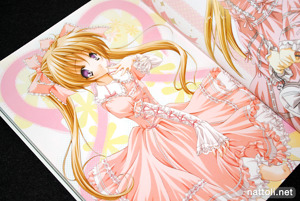 If you're aware of Yukiwo through his more recent art works, then you can see that his art has changed rather dramatically over the years. With his new style, the eyes are much more round and smooth, and smaller in proportion to the face. Though the frilly dresses continue, his style is a much more...I dare say, generic looking. On the bright side, I think his newer style is much more sexy, with more "well rounded" girls over all.

There are a few Alice in Wonderland illustrations also. I always enjoy seeing different artists draw Alice, because she's a character that you recognize when you see. As a result, you can also consider the aspects of her costume the artist found most representative of the character and decided to include.

There are also girls in slightly less lolita-esque costumes, but their clothing still retains the frills and lace that the other images do. 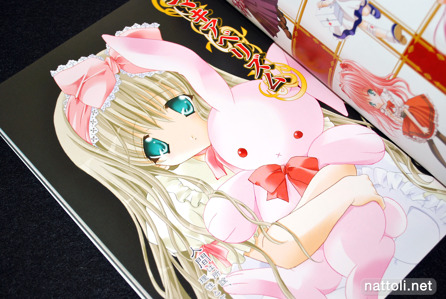 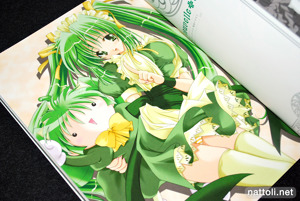 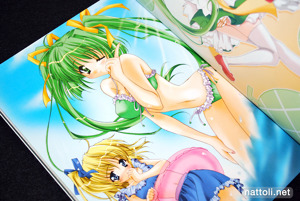 There's a small Melonbooks section, with Yukiwo's Melon-chan illustrations. It's just 5 illustrations but it gets its own section ^^; 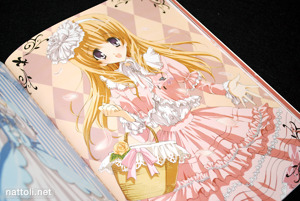 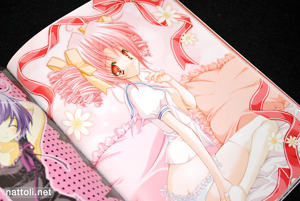 Though this book was originally priced at ￥1900, you can find it used on Yahoo Japan Auctions or Amazon JP Market Place for significantly less. Even Mandarake has it for ￥1000.

The final color section of the book consists of illustrations for a magical girl series that ran in Dengeki Moeh Magazine volumes 7 through 13. The art work in this section has a slightly different coloring style than the rest of the book, and I don't like it as much ^^;

A little too girly for my tastes as a guy. Hahaha!

I wouldn't mind a new artbook, as Yukiwo's artstyle is more refined nowadays :)