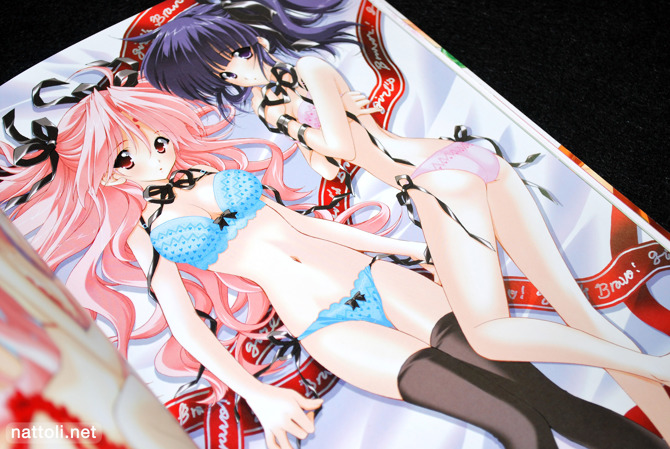 This collection of Girls Bravo art work is illustrated entirely by Mario Kaneda, so it won't contain the style of art you may know from the show. Girls Bravo as a manga first started in 2000, even though the anime didn't begin until 2004. So what does this mean for the book? It means that you can see a lot of style changes in Mario Kaneda's work in everything from coloring to line art.

The book is divided into sections, with a focus on each of the main girls, Miharu, Kirie, and Koyomi. From the set up, I would guess that each of the girls received a newly published illustration for this art book, but I didn't follow the series at the time so I can't say for sure ^^; First up is Miharu, with 10 solo illustrations, though some share a page.

Next we have Kirie, also receiving exactly 10 dedicated to her. Again, some of the pictures overlap, like you would expect to see in a magazine and not an art book. Koyomi's section is exactly the same. These dedicated sections take up the first 23 pages of the book.

The rest of the book is an assortment of group pictures, featuring the three girls and the rest of the cast. This is where you really start to see the subtle changes Mario Kaneda made to his characters over the years.

I think the most noticeable difference is in the eyes. Take the two pictures below. On the left, the eyes have more color with a gradient over the black, and they're longer as well. That's the more recent look for his characters. 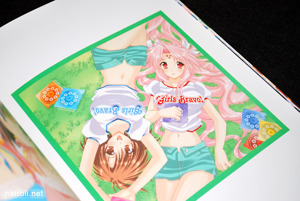 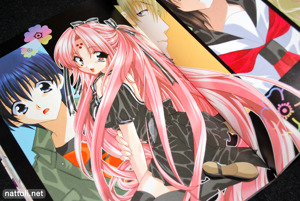 Do you dislike it when character designs change drastically? One show that immediately comes to mind are the two very different looks for the Mahou Sensei Negima series.

Still, I feel the art work in this book really stands the test of time. I have other collections that feel quite dated, but the vibrant colors and detail Mario Kaneda puts into his art work makes it refreshing to look at in any year.

The art book finishes with a short black and white comic of all the girls trying on wedding dresses. It even includes a new (for the book) color illustration with all the girls dressed up.

Surprisingly, the picture index is in black and white, but that was most likely to save cost considering the book has a cover price of only 2000 yen. With 96 pages in total, and the vast majority in color, it's a good deal. If you're hunting for your own copy, be warned, it's out of print so you'll have to try for it used!

Black and white illustrations look pretty good too, not a bad deal ^_^

Girls Bravo is so pretty, so much pretty in one book! Thanks for showing it!

Mario Kaneda isn´t a bad artist but the fact is that I´ve seen the anime before reading the manga what made me feel that the looks of the manga were wrong (even if I know they´re the original work).

Hehe! I was exactly the same way, it really took me a while to like Kaneda's Girls Bravo designs, but I instantly loved his art work that wasn't from the show. It really does kind of spoil you when you watch the anime first ^^;

i love them they r so sexy