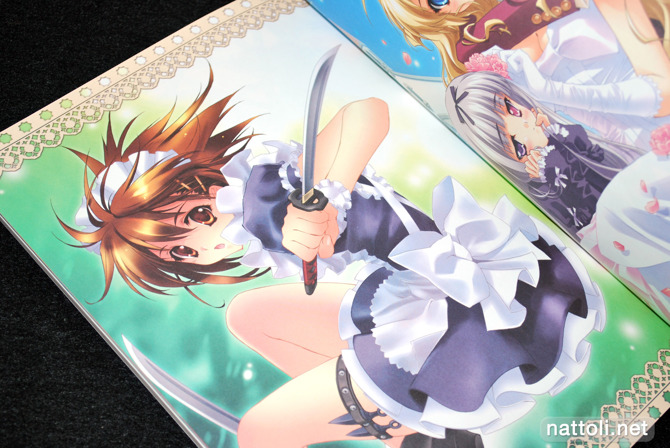 I'd been looking for those volumes because all had a good amount of color illustrations, but I hadn't been able to find them at a price I liked. So while I was looking for the CARNELIAN Art Works IV, I spotted this as well and bought them both at the same time.

Benigyokuzui vol. 20 had seven new illustrations, all of beautiful "princess" type girls. The layout in the remix is identical to the original, with two page spreads dedicated to a single illustration, even though the art work in most cases doesn't need more than a single page presentation. The monochrome portion of Benigyokuzui vol. 20 is also gathered in this remix book, which includes a story page for each of the pictured girls in "Princess Mode" along with a very not-safe-for-work illustration. 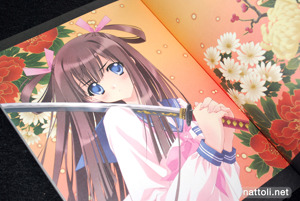 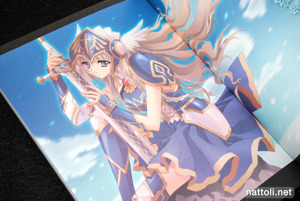 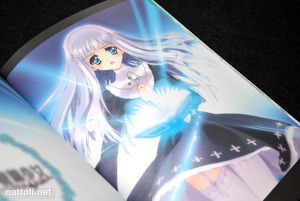 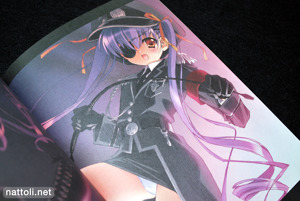 It's kind of a waste of a page, but the covers are re-printed for each volume inside Benigyokuzui Remix 20-21-22 as well as the inside illustration of the cover. The theme for Benigyokuzui vol. 21 is fighting girls (戦闘少女), with all of the illustrations featuring girls using weapons ranging from swords to magic. I love the way CARNELIAN details armor, and always makes it look so feminine. Again, the monochrome pages compiled at the end of the book from this Benigyokuzui volume are all NSFW.

The final volume included is Benigyokuzui vol. 22 which was released during Comiket 75 along with volume 21. There isn't an illustration theme to this one, and it includes some of the art work used in CARNELIAN's 2009 Calendar, as well as some copyright illustrations. The corresponding monochrome section features sketches and line arts of the featured finished illustrations. This volume also had some overlap with the illustrations in CARNELIAN Art Works IV including the cover art work, and the red-themed illustration of a girl in a lolita dress. 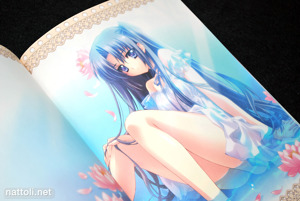 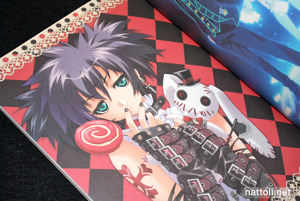 Benigyokuzui Remix 20-21-22 is B5 sized and printed on 84 lightly-textured pages, without including covers in that count. Of that, 44 of the pages are in color, with the rest in monochrome sepia tones. It should be mentioned that there is a nearly identical "Taiwan Version" that isn't a bootleg but rather a Fancy Frontier 14 release. It's on Yahoo Japan Auctions as well, but from all the mentioned listings it has only 60 pages, so some of the content isn't included. Something to look out for when grabbing a copy!

I'm so glad I bid on this! It has some illustrations I've never seen because people don't scan Carnelian's doujinshi much anymore. I love love love the female warrior (valkyrie?) illustration. And Garnet Cradle art too, yay! Thank you for the photos. I am super excited to get it now. :D

Have you gone carnelian crazy?! XD

Yes :D I also received them at the same time, so I tend to take pictures of stuff all in one go :3

Hadn't really paid attention to Carnelian's work this past time but seeing the gorgeous illustrations here reminds me Carnelian's still a really great artist. Maybe I should try and grab one of those collector's books.