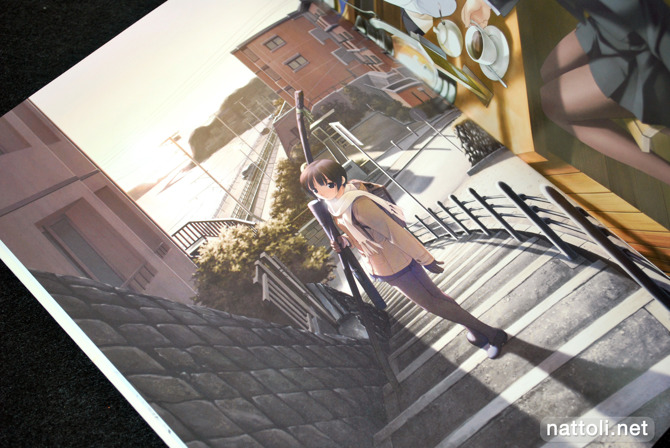 Hashimoto Takashi's FC-G Artworks is a collection of the artist's work spanning more than 10 years, from 1998-2009. Surprisingly, that amounts to an A4 sized, 104 page art book. Hashimoto Takashi is probably best known as the original character designer for the Pia Carrot (Pia♥キャロット) series of games, that also spawned a movie and an original video animation with Pia Carrot 2DX. And as you may guess, that makes up a large portion of FC-G Artworks.

This art book was originally a Comiket 76 release, retailing for 3000円. In the first picture above is an A4 sized print that came with the doujin version on Toranoana. When I purchased the book, I noticed that the back cover included an ISBN number, and that happened to be because it was in the unique situation of being commercialized. The release date for the commercial version of this book is January 25th, 2010 and though it's listed on Amazon JP, it doesn't ship outside of Japan. But if you're interested, plenty of other shops have it for pre-order including Hobby Search, Amiami and HLJ which all ship overseas. 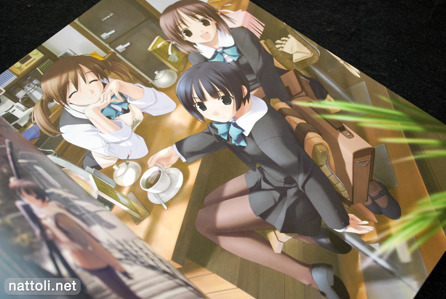 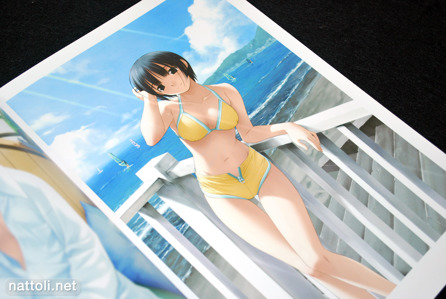 For those of you more familiar with gaming scene, Hashimoto Takashi's art work from White Breath ~with faint hope~ (ホワイトブレス) is featured in the book, with 15 illustrations on 17 pages. The background art work in this section is beautiful, so it's a shame that backgrounds aren't as emphasized in the rest of the works.

The section after White Breath ~with faint hope~ starts off with an assortment of copyright illustrations from several computer game magazine covers and a few illustrated for Dengeki Moeh magazine. There aren't any visual markers in the book denoting sections, but they are ordered in the index.

The copyright section is 30 pages long, with a total of 27 illustrations. Like many other illustrators, Hashimoto Takashi has also done some art work for the BROCCOLI trading card game Aquarian Age Saga, that you can see above in the creepy girl in white, and the evil one twirling what looks like blood. There are also illustrations from Fate/Stay Night, Shuffle, and Hashimoto's Comiket Catalogue covers. 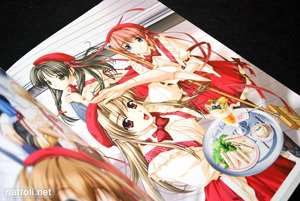 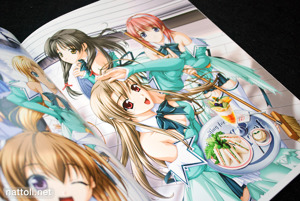 The Pia Carrot section starts off with essentially the same illustration three times---the only difference in each is a change of clothing.

The final section is With You ~Mitsumeteitai~, a game that was later adapted into a short original video animation. There are 15 illustrations in this section. Oddly, there is one illustration suffering from extreme JPEG compression and yet, they still printed it like that. Maybe it will be fixed in the commercial volume.

I can't say with 100% certainty that this will be identical to the commercial release, but considering the printed ISBN on the back of the book along with the page counts and preview illustrations listed on some of the websites selling this collection, it seems like a pretty sure bet.

It seems like cheating when he's made pages with the same characters in different color clothing!

Does it look washed out to you? Doesn't look very vibrant for me...