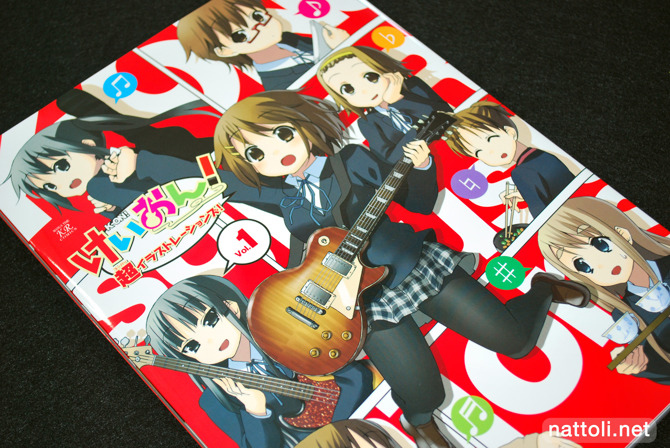 I was quite surprised by the contents in the new K-ON! Super Illustrations Vol. 1, as it features a combination of official art by the manga creator Kakifly (かきふらい) and tribute illustrations by a wide range of well-known (and relatively unknown) artists. It's an interesting mix, and it just makes me think they didn't have enough of either to put out a full art book. But seeing as how it's labeled as volume one, we can be expecting more of these in the future. 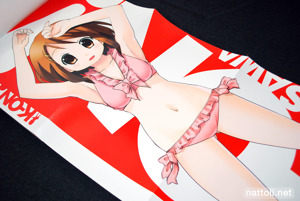 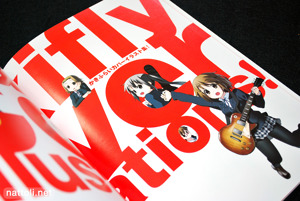 The book starts out with a newly illustrated 4-panel poster with Yui on one side in a bikini and Mio on the other, also wearing a bikini. If you're familiar with Kakifly's illustrations, you'll know they're not a lot like the Yukiko Horiguchi designs you see in the anime, but they have their own charm. 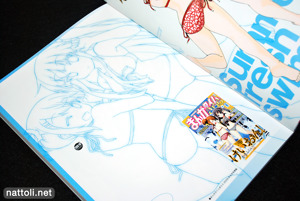 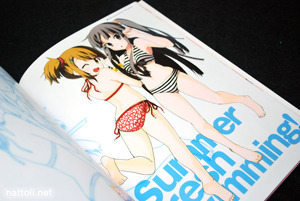 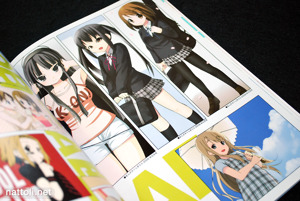 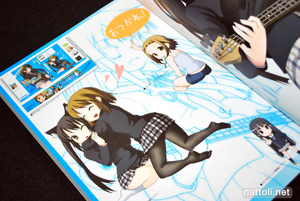 Kakifly's art work takes up the first 33 pages of this 120-page art book. On the down side it's really more like every other page, as the page layouts are one page illustration, one page line art for the most part. The illustrations are mostly cover arts for the manga volumes, and covers that appeared on Manga Time Kirara Magazine where K-ON! is published. 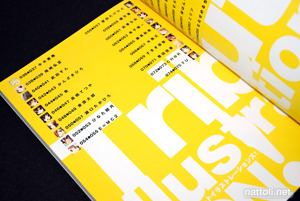 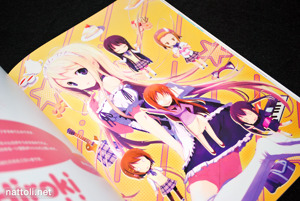 The rest of the art work in this collection is all essentially fan art. Much like with the Code Geass Heroine's Tribute that came out last year, each artist gets an information page with a sketch next to their finished K-ON! character illustration. 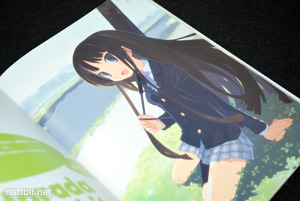 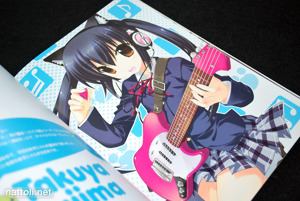 As I mentioned before, there really is a wide range of artists in this book, with several that I've never heard of, and others that I've seen plenty from. Above are some of the more popular artists in the book; from left to right Kanzaki Hiro, Sakana, Hinata Mutsuki, Takehito Harada and Takuya Fujima. As you can see, there's some heavy bias towards Mio and Asuza, but it's to be expected! XD

Of course, Mugi and Ritsu do get some love too. It's really amusing to see how different artists take on Mugi's very distinctive eyebrows. Above top row we have Nilitsu, Shin Hashimoto (who was in the most recent issue of Gelatin), and Yohichi Ariko. In the bottom row from left to right we have Kyo, Mirura Yano, and Siro. 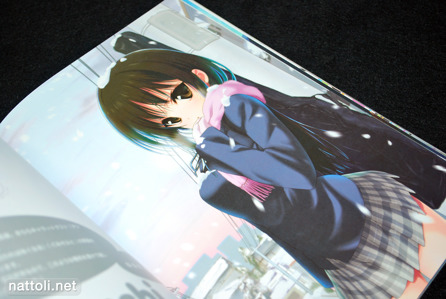 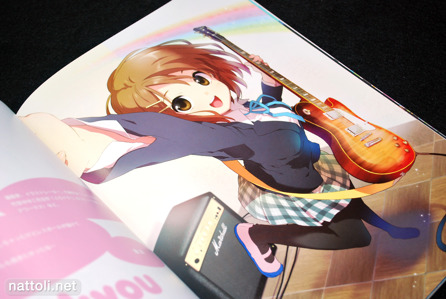 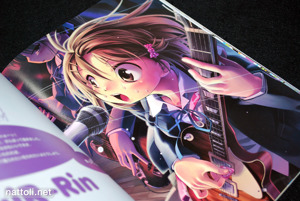 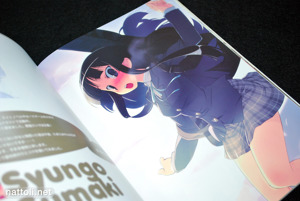 In total, there are 40 different artists in the latter half of the book, each with one illustration. Some are a little on the weird side, like the picture of Yui above by kiR-Rin. But most stay true to the character designs and personalities of the K-ON! girls. There is an index in the book, but it only includes the official art works by Kakifly, as the rest were clearly labeled on their information pages.

There really is a lot of high quality art work by so many up and coming artists, so it's quite enjoyable to go through. Plus, it is K-ON!, which it seems people either loved or hated for the most part. I have no idea how they're going to get another (rumored) two books out of this art book series, but we'll see! For now, I'm happy with this one ^^

Is this the first K-On book?

It's the first with art from the manga, and the first that focuses on illustrations. There has been an anime guide released, which has the illustrations you may have seen from the anime that appeared in magazines and the like.

Thanks for letting me know!

While I like this art book I wasn't planning on buying it but this particular illustration of Mio is convincing me otherwise:

Wow, b-e-a-utiful! You should really stop with these fantastic reviews (^^;) They're starting to build up on my credit card bill (Just kidding, keep up the good work!)

Have you heard of Tony Taka's new art book which is out this month? It's supposed to be a collective of all works [Ciel] or something. Not really sure since I don't keep tabs on eroge or anything but it looks pretty good. I ordered it off Kinokuniya USA already and should get it soon, weather permitting.

Yeah, I loved that one too ^^ I bought the Tony Taka book as well, it's seriously great, and even better for those of us who haven't managed to collect the older art books and his GRAPH doujinshi series. I had my doubts about it being too adult, but it's way more tame than COLLECT1 and just illustration packed. Hope to review it sometime this week too! :D

That's actually good to hear because I too have Collect1 and it's sitting wrapped up because of the intense eroticism emanating from underneath the cover (^^;) Not something you can just lay around the house even if you're by yourself.

Oh, this is actually pretty good. I like it ^^

Nice book ^^ Thank for the sharing

I think you just convinced me to get this book. Kakifly's art is pretty good, but I'm especially interested in seeing what the other artists have to offer, and I'm sure it'll look even better in print.

Thanks for the review of this 'K-ON!' book, wasn't sure about the art in it and am not really a fan of Kakifly's style. Not that I dislike Kakifly's art either... think it's due to the coloring style he uses which isn't my favorite.

The collection of art by those other artists looks terrific though and I certainly don't mind the Azusa and Mio focus. ^^

Trying to catch up on artbooks now >_<