This feels like an odd way to describe an art book, but Pixiv Girls Collection 2010 is really a lot of fun. It's enjoyable to look through, and you can take it to the next level where every time you see an art piece you like (and this will happen a lot, I guarantee it) you can go to the artist's Pixiv page immediately and see more art work, because this time they've included the Pixiv artist ID number next to each illustration in addition to the name! 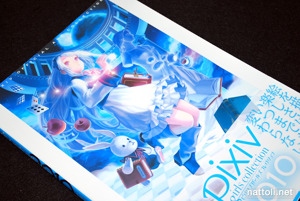 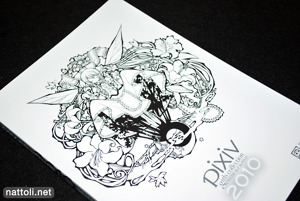 The cover illustration is by SIRO, whose work also appeared a few times in the previous book. From looking around, it doesn't seem like this artist has published works outside of Pixiv, but I would think this would be a great launching point and an honor. Under the slip cover is a monochrome work by Aki which may go unnoticed ^^; 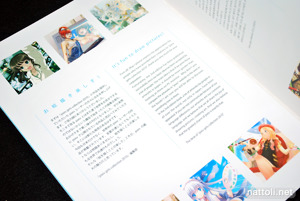 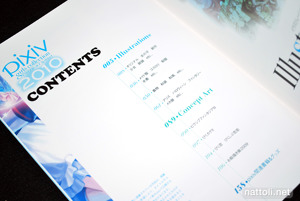 The introduction page includes Pixiv's mission statement about the goal of the art book in Japanese, English, Korean and Chinese. It's cool in that they really acknowledge their audience has become international, and mention it as follows: "In the 2nd edition book, a lot of artworks by people all over the world, not only Japan, have been appeared. If you cannot communicate because of our language difference, our artworks are common language, and we believe that we all share the joy of drawing pictures, creating art. And we also believe that the greatest charm of Pixiv is exactly that."

And on to the art work! Though it may seem random, there is some order to the presentation of illustrations. Some of the subtopics in the first half of the art book are the following: original, girls, glasses, maid uniforms, goth lolita dress, swimsuits, Alice in Wonderland (seriously), Halloween, fantasy, mecha, etc. Without too much analysis, there is some overlap to that, along with pictures in sections that don't seem to meet any of those themes but it doesn't really matter ^^;

Some of the 'Alice in Wonderland' theme that I mentioned earlier above. I was a bit surprised to see art by Coffee Kizoku, but it's a lovely piece. I'm also really digging the all-girl rock band by Kajiki. Though it's time consuming, if you want to know the artist for any illustration in this post, just click the image and there's a description with the Pixiv link below it. Though I might not have it done by the time this post goes live, it should be completed within a few days of that ^^

I really think Pixiv listened to its buyers and critics; there are a ton of full page illustrations this time, and for the most part, when they're not full page, they're at least half a page. That is a real difference from the first Pixiv Girls Collection where illustrations were many times placed three to a page. That in addition of the inclusion of the ID numbers pretty much makes it perfect.

Pixiv Girls Collection 2010 is a thick 162 pages in length and A4 in size, with art work stopping at page 157 so there isn't a lot of filler. With so many artists to choose from, they couldn't really go wrong... The illustration on the bottom right (above) is by Nardack, a Korean artist with a healthy following of fans worldwide.

The last Pixiv art collection included what I would describe as a much greater number of professional artists, who you'd know of without the help of Pixiv like Kozaki Yuusuke, Koutaro, HUKE, and redjuice. And though it may all just be my imagination, it really does feel like a fresher collection. 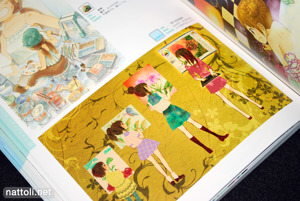 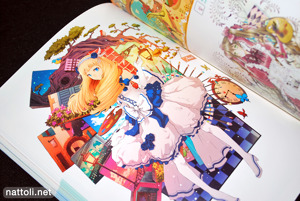 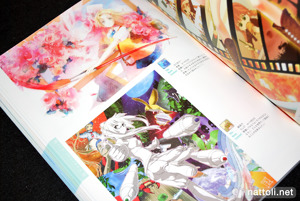 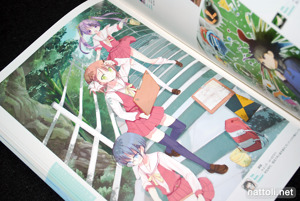 Many of the art works in the latter half of the book are from themed Pixiv events like Pixiv Fantasia III, Pixiv Kage II, and original drawing mascots. Even within the themes, there is a lot of creativity and art works that you wouldn't always expect. So basically, Pixiv Girls Collection 2010 is a great art book. It's just hundreds of art works handpicked from among maybe millions. It also makes for a great guide to start navigating Pixiv, for those who may find it difficult or just don't want to sort through the not so great stuff ^^

Pixiv Girls Collection 2010 is a great collection of Annie girls wallpapers. Your site is great, will be visiting it quite often.

Wah, I was waiting for your review on it. I put in my order two days ago, really anxious for its arrival.

Very extensive review, thank you so much!

Wow, it looks awesome. I stumbled upon it some days ago and was wondering if it was nice. Now I know it is :3 I will order now this one and the previous one then ^^

This kind of community artbooks remind me of the artbook from cafesale (cfsl) community (a french one). It's not exclusively anime oriented artwork though. There is already 3 volumes of 250 pages. They're awesome too :3

Looks like a very interesting book, certainly seeing the illustrations you show of it. Might have to pick this one up when I can. ^^

Sweet. Nice review. Even though I already ordered it and am waiting for arrival it's great to see a taste of what's in store. I'm glad they upped the quality over the 2009 edition with more full page illustrations. It's hard to appreciate a work when it's been sized to a square on a quilt of other pictures.

I also ordered Touhou Project Art Works which was released in 2009. Overall I try to gun for art books that feature various artists than ones that have a single focus. Every page is something new to learn from.

I decided to finally register. Better than having to fill out that form each time o_o

My avatar was taken from an image by artist Nishieda depicting a dinner for cats where the waitress is, of course, a cute voluptuous neko girl. Unfortunately I haven't come across any focus art books/doujinshi of Nishieda that don't have any hardcore ecchi material. Really wish they'd make one.

Preach on. I was so excited when I'd first heard about Dendrobium, and then later disappointed when I found out most of the illustrations would be a lot more than a little ecchi. So most of the work I have from him is part of 'various artists' collections. Maybe next time :D

One thing that differentiate this Pixiv artbook from the others is that all illustration were prepared for printing right from the beginning! As expected, lot less images crammed per pages. Now I'm a bit late with the artbook of February, I don't have time already to appreciate my C77 stack orz… just a little glimpse in it.

It does! Amazon JP has betrayed me! XD

Oh yeah, that definitely would make a difference. I guess if the artists submitted their work too small, the best they could do in the last one was the practically postage size printing for some pictures.

Betrayed? xD You could receive my new artbook shipment lol, but it would only be duplicate.

Didn't expect a pixiv collection would be worth much attention, this looks way more awesome than the pixiv website presents itself!

Yeah, that's the difference it makes in being able to handpick submissions instead of just accept everything (like on the site ^^;)

I ordered it too and can't wait for it to arrive _It's good to know that this time the book features full page illustrations since in the last book some of the images were really too small. >:

I think I'll be buying this one aswell. I was already satisfied with the first Girls Collection that I bought last summer, so this will be a nice one to add...

An art which on main picture made by singapore artist. I know him.