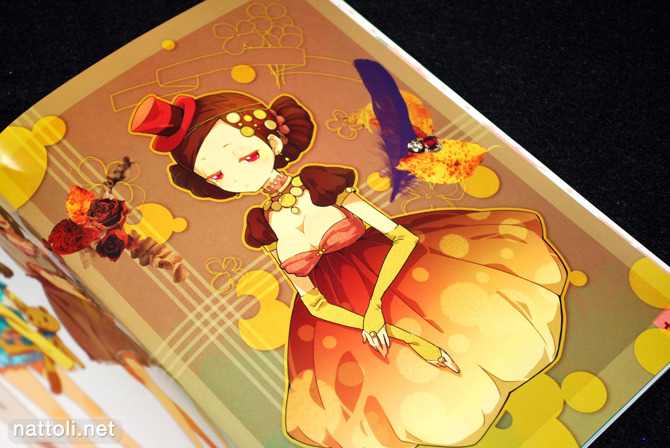 Ukke's colorful and polished art work continues to impress in her TRIP LIP Girl's Illustrations Winter 2009 collection, featuring the most recent assembly of her original illustrations. TRIP LIP was one of two releases by Ukke at Comiket 77, with the other being the Vocaloid book, Megpoid Crosslight. 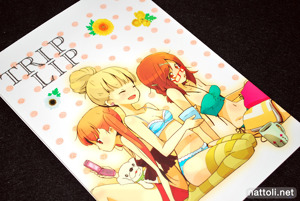 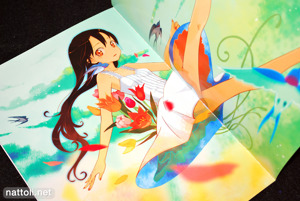 TRIP LIP is B5-size and full color, with a cover design that extends the covers a bit to make it look more like a slip cover even though it's not. But it does surprisingly make the book feel quite sturdy ^^ TRIP LIP is 20-pages in total when counting the covers, though the cover illustration is repeated inside with a two-page spread. The illustration on the right above was initially featured in a Kikan S (季刊S) magazine, which is one of the few places I've seen her work commercially more than once. Kikan S is actually really good about regularly featuring impressive artists. 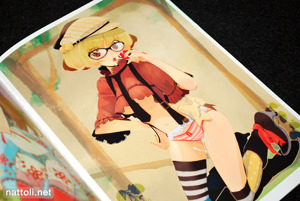 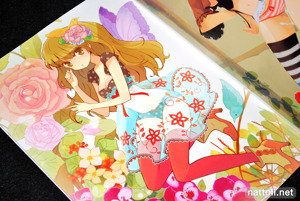 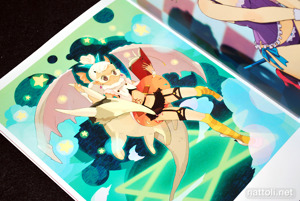 Though there aren't a lot of illustrations, I was impressed to see how finished they all were, with decorative backgrounds, beautiful coloring and rather eccentric outfits for the most part. Compared to the first doujinshi illustration book I have from Ukke, the coloring has improved significantly, creating a more refined look than the cleaner cel-shaded style she's had in the past. There is one guest illustration in the book, but it looks intentionally amateur ^^; 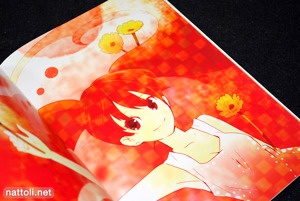 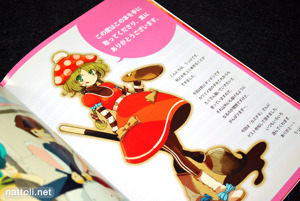 Though there are only ten illustrations by Ukke in total (three are spreads) TRIP LIP is still a pretty solid collection with well-finished and original illustrations. And it can still be found on Yahoo! Japan auctions, pretty cheaply too ^^

....Cheap if you somehow don't have to pay shipping!

More like cheap to people who know the regular costs of buying doujinshi. I'm sure everything looks expensive to speculators.

If i had to buy bulk it would be ok, 20 pages is a little lean XD

I always buy in bulk, even with art books. It would be too expensive shipping single books!

The lowest I've gone for a doujinshi is 8-pages, and when you consider two of those are covers... >_<