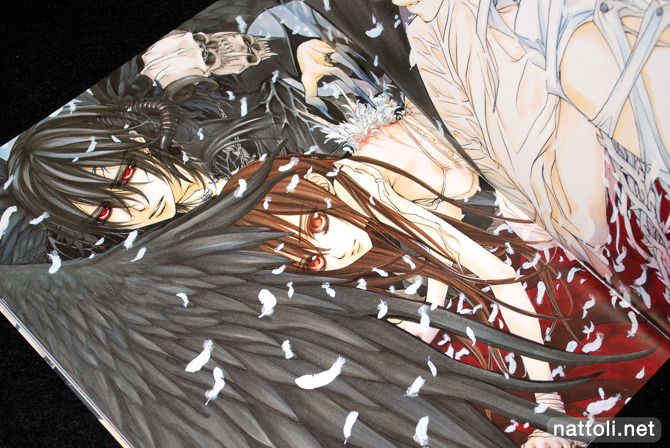 Hino Matsuri, author and illustrator of the popular shoujo manga Vampire Knight, released her first art book on July 5th titled Hino Matsuri Illustrations Vampire Knight. Like with most manga illustrations, many of the art works were initially seen only in issues of LaLa magazine and usually heavily covered in text.

This collection is 94-pages and A4 in size, though width-wise it is a little wider than your average art book. Hino Matsuri Illustrations Vampire Knight solidly packs in illustrations with many two-page spreads and several full page illustrations. Though some illustrations do share a page, they are mostly illustrations that were meant to be presented small, like the small end of chapter illustrations on the manga volumes. 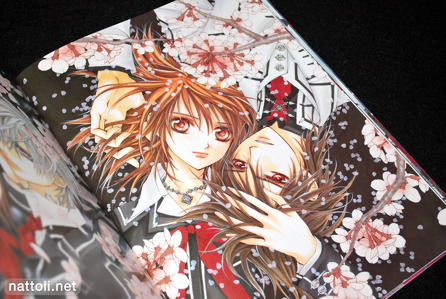 Most of the illustrations are of the main trio; Zero, Yuki and Kaname. But even with in that, there are a lot of pairing pictures, mostly Zero x Yuki or Kaname x Yuki. Those really do tend to be some of the best ones though, as Hino Matsuri always has a really 'dramatic' take on her coupling illustrations. 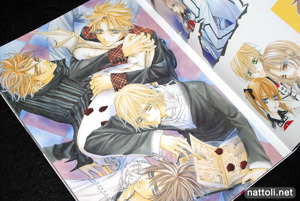 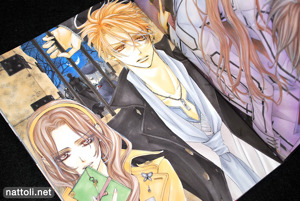 Even still, there are more side-character illustrations than one might expect. It's really quite a complete collection of published art work for Vampire Knight so far. 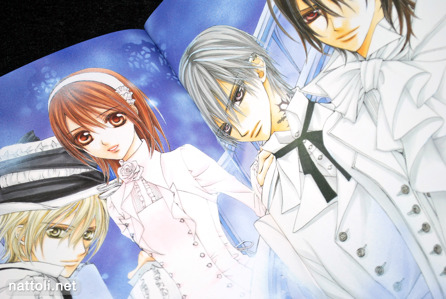 Again, I don't know if it's just my copy, but several of the pages are inwardly glued to each other, as it appears to have seeped from the spine of the book. It's accidental, as I can easily pull them apart, but not without some damage to the color on the pages. You can see it in the image above; that's as far apart as those pages go.

All the manga covers are included, up to the most recently released volume 12. I don't buy LaLa magazines, so there are a lot of smaller, non-cover illustrations that ran in the magazine I'd never seen before. 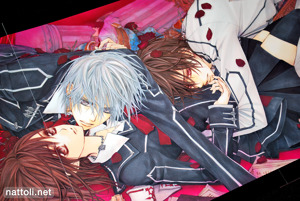 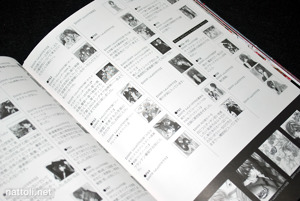 As there's no text anywhere on the illustration pages, all of Hino Matsuri's comments are in the index, along with a three page narrative of how she illustrated the cover illustration (and extra-long fold-out poster inside). The cover/fold-out poster is the only new finished illustration for the book. Aside from the glue issue, I thought Hino Matsuri Illustrations Vampire Knight was really good value for money, being priced at an affordable ￥1,890. Definitely a must-have art book for any Vampire Knight fan!

I love me some vampire knights! Best boys love type art out there!

Ah, I prefer Ayano Yamane and I'm sure most fangirls do.

Thanks a lot for the review! I was hoping you'd put one up for this fabu book. I've got the book ordered but it's taking its sweet time and probably won't come in for a while.

How many pages did you find the glue? Bummer how such a nice art book has sloppy glue.

It was on about 16 pages. While glue sucks, it sure beats pages falling out :D

Hopefully not all the copies are like that! Mine might have even melted on the way over considering the weather around here lately...

Yeah, the weather has been pretty roasting lately. Hopefully the glue problem is related to that and isn't a defect. We'll see as more people get their copies.

You say there's a good balance between the main trio and secondary characters. I'm happy to hear that! Is the ratio close to 50/50? I like seeing the variety in characters. I remember I bought the Chobits art book and while I love CLAMP's art it was disappointing to see 98% of the book was based on Chii. That book eventually left my shelf.

There were more secondary characters than I expected, but it wasn't balanced, more like one-fifth of the pictures had side-characters in them. To be honest, I was more or less expecting it to be like 99% Kaname, Yuki and Zero.

I really did like the side characters in Chobits too, but the art book still won me over with the sheer abundance of different outfits for Chii :3

I expected the 99% trio ratio too, but I'm glad the VK book didn't go that route. The poster is single-sided, yes?

How many pages share art? For the shared pages are artworks mostly half-pagers or are they smaller than that? Some books I've gotten share images and sometimes the art is thumbnail size and hard to see.

I have Chobits manga cards and whenever I flip through them I recall the loads of outfits.

4 of the shared pages are half and half; the other 13 have a variety of images in various sizes. Sometimes a picture gets more than half the page with a bunch of smaller, end of chapter sized illustrations beneath it. Due to the print quality in this one though, even the small sized images look clean.

My copy of the art book arrived at last. I had no glue problems but I noticed there was some color artifacts in some of the art. Does your copy have this issue?

Glad to hear the glue wasn't a problem with all the books. Could you name a specific image with the color artifacts? I didn't notice it when I looked through.

Two pages with the most artifacts was one with Yuuki with a pink curtain and the other was Yuuki against a dark blue background and she's wearing gloves. Do your pages have any artifacts?

I checked, both of those are clean as far as I can see and look like they're printed directly from the original marker and pen source.