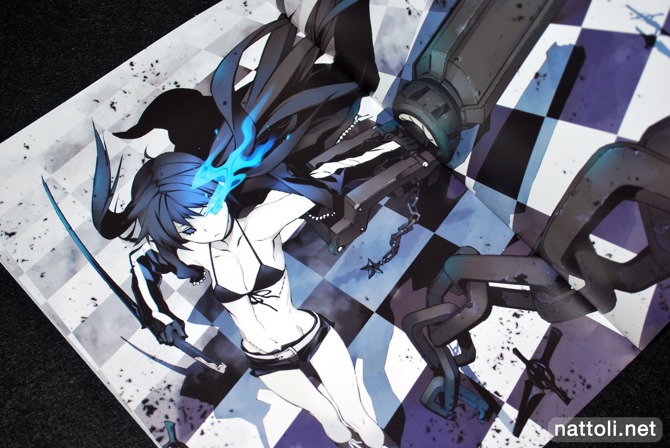 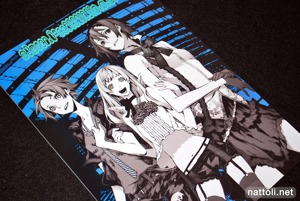 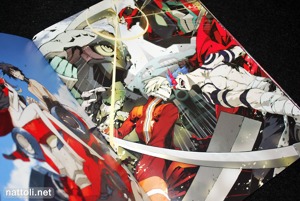 m3wver.7+ce is A4 in size and 48-pages including the covers. It's about half color, half black and white---although the monochrome illustrations are exactly that, illustrations and not sketches. Since I've always felt Miwa Shirow's coloring looks a bit off, I'm not one to complain about the monochrome works ^^

The first three works are all page spreads and at least one of them appeared before in one of the monochrome collections. They're all from Atlus games from the Shin Megami Tensei series, but I'm hazy on exactly which batch of characters are represented. 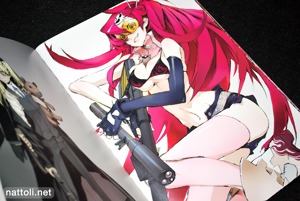 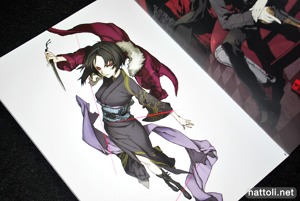 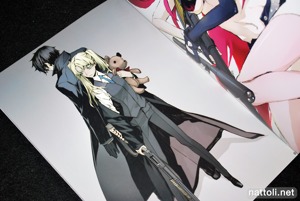 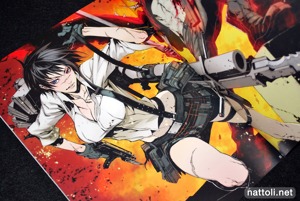 There are three (color) Tengen Toppa Gurren Lagann illustrations as well as several Type Moon characters in m3wver.7+ce. Even though the colors are different, I'm pretty sure based on the clothing that Shiki from Kara no Kyoukai makes an appearance along with Fate/Zero characters in the color and monochrome sections. Also featured are fan arts from Devil May Cry (with a two-page spread) and Gunslinger Girl. 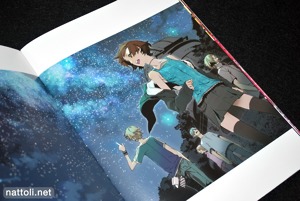 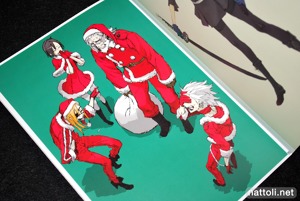 The color portion finishes up with a few color illustrations from DOGS and a spread of Black Rock Shooter, along with an illustration from one of the Supercell CD covers. One thing this collection is lacking is any kind of index or even text below the illustrations identifying the where they're from ^^;

As I mentioned before, the black and white illustrations are still quite impressive, with my favorite being the fan art of Viral from Tengen Toppa Gurren Lagann. Perhaps it's one we'll be seeing in color in a future Miwa Shirow doujinshi!

I'm not fond of his colors but his B&W illustrations are godly. His ink work is incredible in DOGS B&C.

There's also a doujin named "m3wver.7" (without the "+ce", yellow cover), do you know the differences between them?

(Oh, by the way, did you consider to split your reviews in two categories: doujin & artbook? I often use your references to buy books and I think it would be easier to check through as the number of reviewed books raises.)

Now that you've mentioned it, I guess the +ce means color edition. I have m3wver.7 with the yellow cover as well, and looking through it, it has 6 of the illustrations that end up in color in m3wver.7+ce. But there are also a few pages of sketches, as well as other finished monochrome arts that didn't appear in m3wver.7+ce. Also, m3wver.7 is B5 in size, and 24 pages, not including the covers.

There used to be a separation for art books and doujinshi on the "Rankings" page, but it stopped working so it was removed. Hoping to get it back up in the near future though, along with making it so you can see reviews under a specific artist.

Guess I'll get the +ce since it's bigger and has more pages, thanks a lot for the info!

This is freaking awesome, how did I not know about it?

Wasn't familiar with this artist but feel the same, the color works are okay but the monochrome ones are indeed much more appealing.

Ah, man. I keep crossing my fingers for Miwa to release an official artbook so I don't have to go to eBay and have an absurd price stare me in the face. :(

omg Miwa Shirow's artbook is just too much eyecandy Oi have to get this artbook!!!;; I've been a fan of his style for quite some time now... Especially his B&W works <3