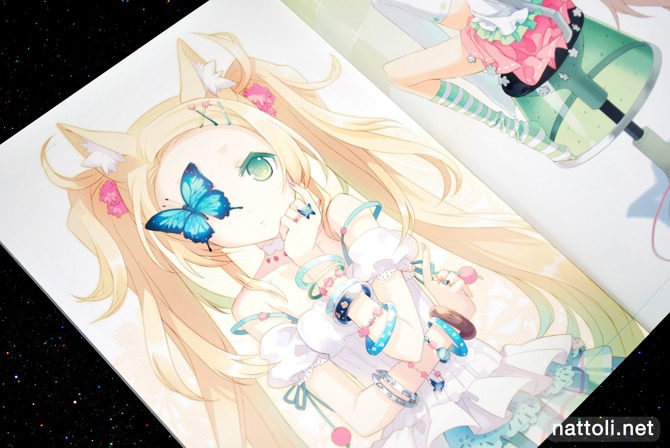 Thinking that H2SO4 had a pretty good Comiket 77 release, I had nearly convinced myself to pass up on the Comiket 78 release, Blonde Blossom. But I'm so glad I didn't! Blonde Blossom is an excellent collection, packed with some of H2SO4's newest works along with prints of several of the hard to get promotional K-Books illustration cards. 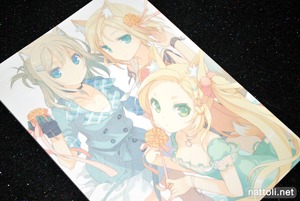 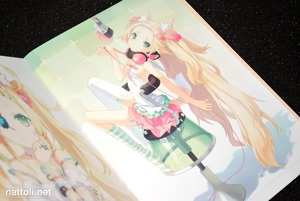 The majority of this B5 sized, 40-page doujinshi (covers not included in that count) features full-page, full-color illustrations. And for once, H2SO4 has kept the monochrome to a minimum with only 8-pages in total. The cover illustration, which was drawn new for the book is featured again inside as a page spread. Though you can hardly see it, there is text embossed on the cover, which you can faintly see on the left side in this photo.

The first half of the book features some of the illustrations that have appeared in previous H2SO4 publications, like Girl's Rhythm, but in smaller sizes. There are also a couple of illustrations from Toranoana goods, along with an original work H2SO4 did for an issue of Kikan S Magazine. The rabbit-eared girl Suee from DJ MAX Portable appears in this collection several times. 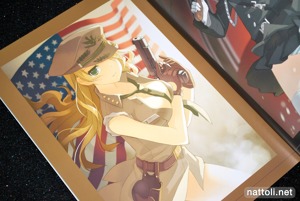 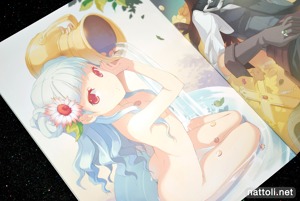 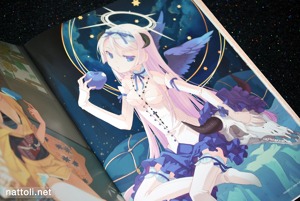 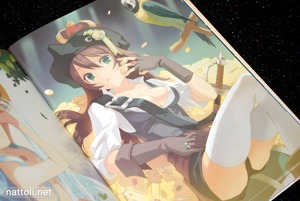 The best part of this book for me was the K-Books illustrations that were previously available only in playing-card size. Not only were the Tarot card illustrations included, but also the military uniform set ones which came out last summer.

The last part of the color section included several fan art contributions that H2SO4 had done for past fan doujins. Among them was the cover illustration done for The Melancholy of Haruhi Suzumiya doujinshi fan book, and the illustration contributed to the Queen's Blade Official Visual Fun Book Vol. 03. The illustration done for the 2010 Cuffs, Sphere, Cube Calendar was also in there. And though I seldom see Touhou from H2SO4, there were two illustrations from it in this collection.

The eight monochrome pages at the end mostly contained black and white line arts and grayscale illustrations. Only one page included rough enough works to be considered sketches. 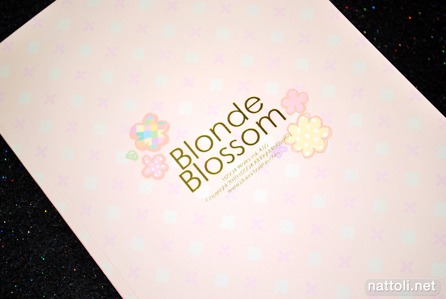 H2SO4's most recent releases have really made the older doujinshi quite redundant. Unless you just like to collect, owning both Blonde Blossom and Island of Horizon Selection 2005 - 2007 would easily garner you an art book-like collection of H2SO4's works. Though it was briefly sold on Toranoana (and you never know, they may re-stock it), your best bet at the moment for this book is Yahoo! Japan Auctions, and it's worth it ^^

I asked a good friend to get me one copy in C78 but it was sold out rather quickly. ;;

I've always wanted something by H2S04 (Sulfuric acid...I can't help but think it when I hear of this artist) since seeing 'World of M' but haven't liked any of their compilations so far apart from the concept book which by itself is nice in terms of art work but too short.

I might buy this one since this past Comiket I haven't purchased much aside the constellation illustration piece by Ito Noizi's Fujitsubo Machine group. I'm thinking about getting Kantoku's newest release and possibly Tinkerbell's though I haven't heard anything regarding what they put out yet.

If I only bought one H2SO4 book, I'd go for this one too. Then again, I'm kind of starting to dislike going too far back with artists, only to be disappointed with earlier styles ~_~

Oh, and Pireze just did a review for Tinkle's illustration release.

I don't own any H2SO4 but your reviews have made me into a fan. This looks like a really good publication; I might have to pick it up on Yahoo Japan sometime.