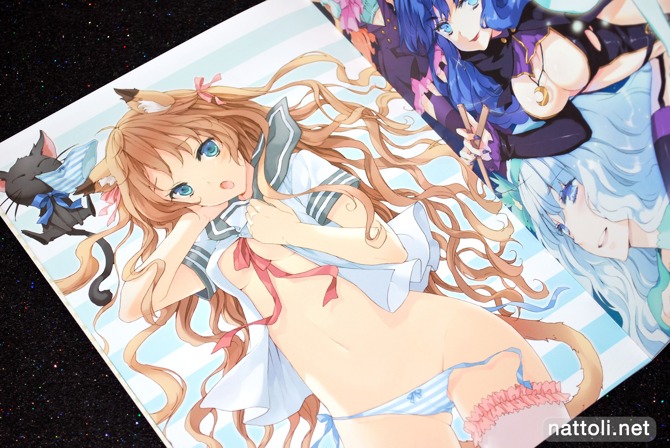 CUTEG's Girl's Collection 2.0 BREAK is a full color illustration book, featuring fan art illustrations from several recent animations like Bakemonogatari, The Disappearance of Haruhi Suzumiya, Angel Beats!, Kimi ni Todoke and Macross Frontier, along with several of the girls from the popular iDOLMaSTER game series. There are fewer original girl illustrations than in CUTEG's Winter 2009 Comiket 77 release Sweet Impact, but the art work is all top-notch as usual ^^ 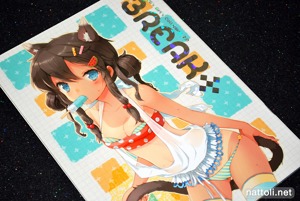 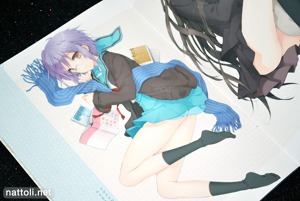 BREAK is a B5-sized, staple-bound doujinshi that is 20-pages including the covers. The cover has a shimmering holographic title text (a very popular addition this year) and inside flaps to make it seem more like a real book. The pages are a thick card-stock kind of paper and very sturdy. The cover art is newly drawn and features a nekomimi girl quite similar to the one on the cover for Girl's Collection 0.5 Vacation. 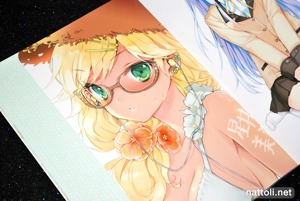 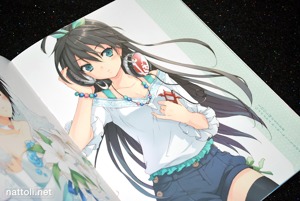 As mentioned before, the illustrations are mostly fan arts, four of which feature characters from the The iDOLM@STER. The iDOLM@STER really suits CUTEG's style because it's all centered around fashionable girls dressing up ^^ For the most part, it's casual clothing except for one illustration with the characters in their usual pink uniforms.

Above are CUTEG's fan arts from Angel Beats! and Bakemonogatari. I think Tenshi was at the height of her popularity for Comiket 78, there really was a ton of doujinshi featuring her.

I was surprised but happy to see an illustration of Sawako from Kimi ni Todoke! It would have been nice to see her in something other than the school uniform, but I'm stiff chuffed it was in here at all ^^ CUTEG takes a little stroll down memory lane too, with the inclusion of Aria from Sister Princess. All of the illustrations are dated too and were all done between 2009 and 2010. I was glad to see too that, unlike with the last Comiket, CUTEG's BREAK was on Melonbooks quite early on, and there are still plenty of copies availble.

So it's all color? very nice