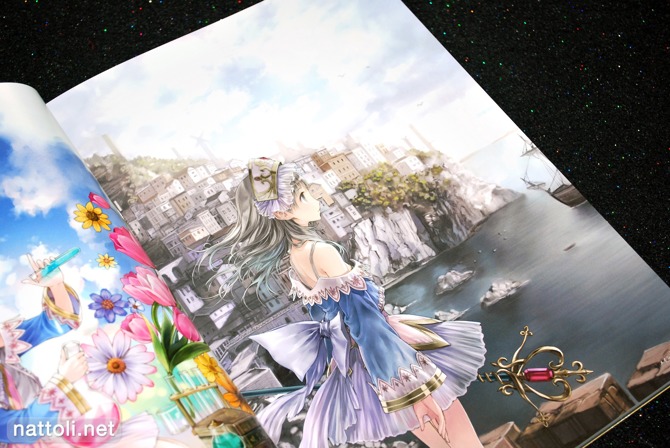 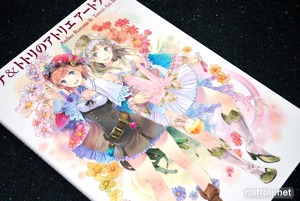 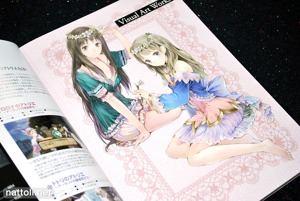 Atelier Rorona & Totori Art Book is A4-sized and 160-pages. The cover illustration is new for the book and features both Roronina and Totoria. That illustration is repeated inside too, without the title text. I remember being really impressed with the illustrations for Atelier Rorona just a year ago, but the Aterlier Totori art works really make them pale by comparison.

The first (and arguably best) section of the art book is titled Visual Art Works and features the promotional art works and merchandise illustrations from magazine covers, CDs, telecards and other books. The sexier Atelier Rorona telecard illustrations that were featured in Atelier Series Official Chronicle on a quarter page now receive a full page display. The art works in the Atelier Totori side have a much more natural color palette that looks lightly muted in comparison to the Atelier Rorona illustrations. I really do think they're a step up from the already excellent Rorona designs, and I'm especially liking the hair detail in a lot of the illustrations. This section runs from pages 4 through 25, with a full page illustration on each of those pages. 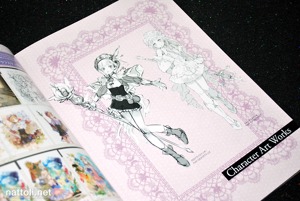 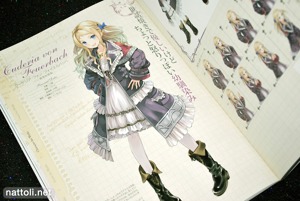 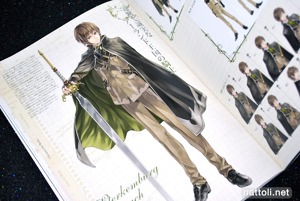 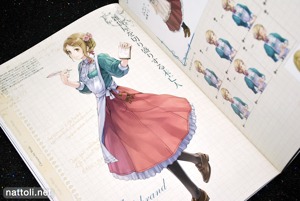 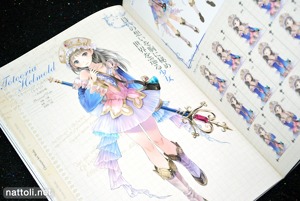 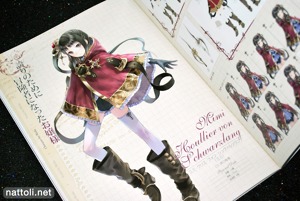 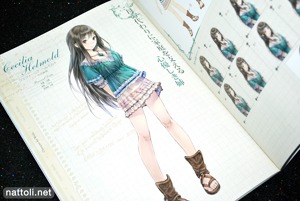 The Atelier Totori character art works make up the rest of this 58-page section. The character illustrations continue to get the full-page treatment, at least for the main characters. Rororina is a character in Atelier Totori and you can see her subtle re-design above. 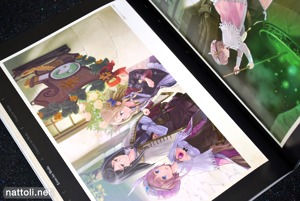 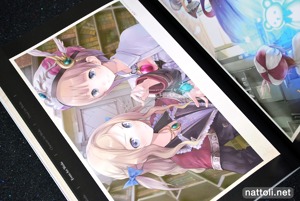 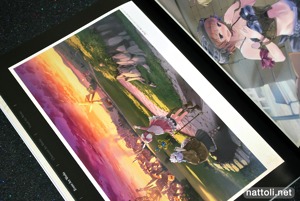 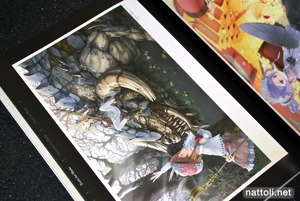 The final illustration section of the art book is the Event Art Works which features the in-game CG illustrations. It becomes painfully clear that the Atelier Rorona CGs were too small to be printed fit-to-page, but they more or less were. Large white borders were placed around each of the illustrations so that they could fit the illustrations to the same page layouts that are in the Atelier Totori section with its larger images. Even still, the illustrations were upscaled a bit and have a very soft, almost blurred look especially on the outlines.

On the other hand, the Atelier Totori section shows us a giant leap in quality with sharp lines, crisp details and larger images. Notice how the white borders weren't necessary on these images. There are 30-pages of event art works for Atelier Totori and 30-pages for Atelier Rorona in total.

The final art section is titled and Other Works and includes some of the early designs for the characters in the two games, although these illustrations are hardly bigger than thumbnails. The book ends with a four page interview with Kishida Mel. Despite some of the short comings with the CG printings, Atelier Rorona & Totori Art Book is a great collection and speaking as someone who wasn't that interested in the art from the other Atelier games, this would have been a much better buy than the Atelier Series Official Chronicle ^^;

I'm glad I waited for this Atelier artbook to be released since I was only interested in Mel Kishida. I can't wait to receive it!

On an unrelated note, are you planning to buy/review FLCLism or Shugo Chara Illustrations 2 artbooks? They're both set for early October.

I'm curious about FLCLism. I pre-ordered it and it's in stock. Still will take more than week to ship to Central Europe... Oh, and this revieved artbook is on the way ...

Huh, would you look at that... I wonder if they pushed up the release date, or if it's Amazon's mistake. Looks like I still won't be seeing it till October either way ^^;

Yeah, that's it. I ordered it through Amazon and they've moved it into "Shipping Soon" although it's not going anywhere since it's the weekend ^^Guess the release date was wrong!

well, it could be wrong release date or that Hobby Search could have got it sooner.

Nice, even the profile pages look well made!

This artbook looks so great IRL. I'm glad I read about it here and ordered it after. I wanted artbook from Kishida Mel. Thank you for your reviews, nat.

Haven't played any of the related games but Kishida Mel's artwork is sublime. Wish she'd do a full "So-Ra-No-Wo-To" artbook someday.