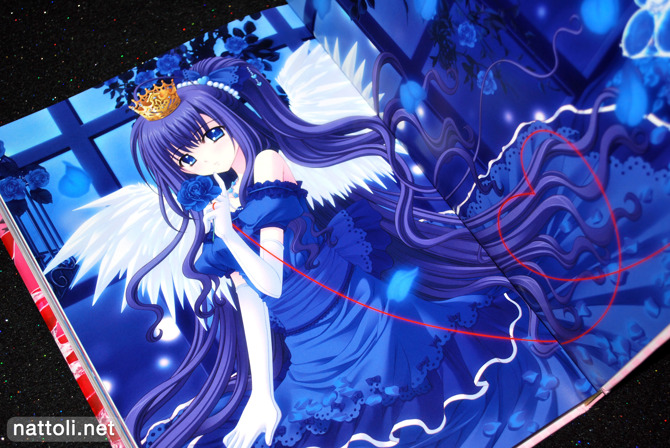 Aoi Nishimata Illustrations VIVID is aptly titled, as the first impression I had of the book was that it was marvelously colorful, with its decorated characters ranging from school girls, to princesses to angels ^^ As the first commercial illustration only collection from Aoi Nishimata, VIVID does an excellent job of showcasing her work over the years, without concentrating extensively on any one time period. Instead, outstanding art works from all years were included, going as far back as the year 2000. 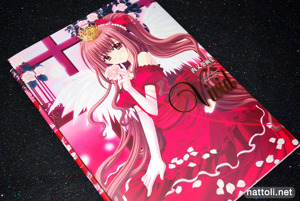 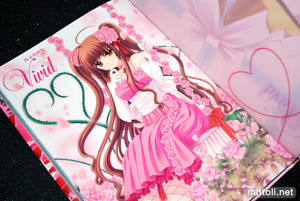 The book itself is hardcover, A4-sized, and a heavy 144 pages. The binding is very tight, and as a result it suffers from cutting into the center two-page spread illustrations. The illustrations are not printed with overlap, so you probably will miss out on a half-centimeter of each illustration. Amusingly, both of Aoi Nishimata's doujinshi art books included overlap for spread illustrations, so it makes the layouts in VIVID seem like a step backwards. 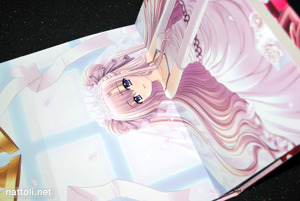 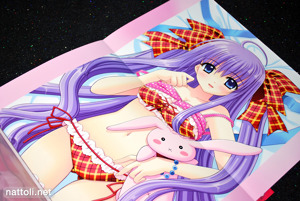 At the front of the art book is a long, double-sided 4-panel poster, with one side featuring a new original illustration and the other displaying a 2009 original dakimakura illustration. The title page of Aoi Nishimata Illustrations VIVID is newly drawn, along with the cover work (and under cover cat illustrations). There is also a color variation on the cover printed inside the art book, photographed in the opening picture.

The book is organized in a whimsical manner, with the section divides being titled Colorful, Rouge, Cerulean, Scarlet, and Peach. As you might guess the illustrations are divided by their major color scheme, making it quite enjoyable to leaf through. The Colorful section is the first in the book and runs from pages 5 through 26 including several group illustrations and spreads from Judgement Chime, Shuffle!, Final Approach and others. 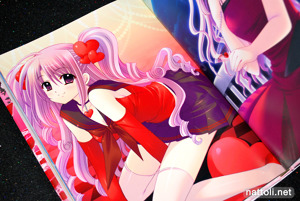 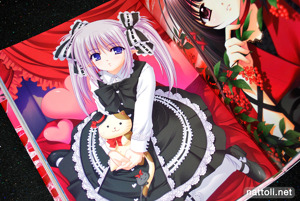 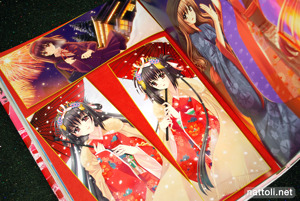 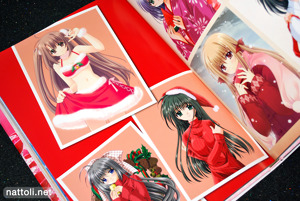 Older art works were often presented as photos as a page. It happened most noticeably when the illustration style was significantly different (and really more amateur) than what Aoi Nishimata does today. I really liked that presenation because I didn't think they should be using full pages on old illustrations and also because older art work for an artist is kind of like a glimpse into the past, like photos. The images above were all from the section Rouge and you can see even the page backgrounds were color-themed.

I think the Cerulean section pulls off its color theme the best out of all the sections, though only at the beginning. Aoi Nishimata really had several illustrations that were either blue themed or blue over-toned and it really just stands out. The Cerulean theme starts to fade out towards the end of the section, where pictures start to become more green or just pale. Aoi Nishimata Illustrations VIVID also has several illustrations that are color variations, like the one above bottom row, center or the cover. But she really does a good job with uniquely coloring her illustrations, so it hardly feels repetitive.

The three illustrations above were all from the Scarlet section, and as you can see (aside from the first one) they hardly follow the theme. For the most part, the works generally have a touch of a red, brown, or orange in them, but out of all the sections this one feels the least coordinated. Not that this detracts from the illustrations at all ^^;

The final section is dubbed Peach but the majority of illustrations are more along what I would actually call 'pink.' This section is filled with girly, frilly illustrations---a number of which are from Lovely Idol whose girls sported pink gear most of the time. The index includes artist's comments on nearly every work along with source information. The book ends with a message from the artist. As Aoi Nishimata Illustrations VIVID covers a long period of time, there is some overlap between this book and Aoi Nishimata's two doujinshi illustration collections. But for the most part, VIVID included newer works and even more finished versions of illustrations that were in the previous books, so it was definitely worth the wait, and worth getting ^^