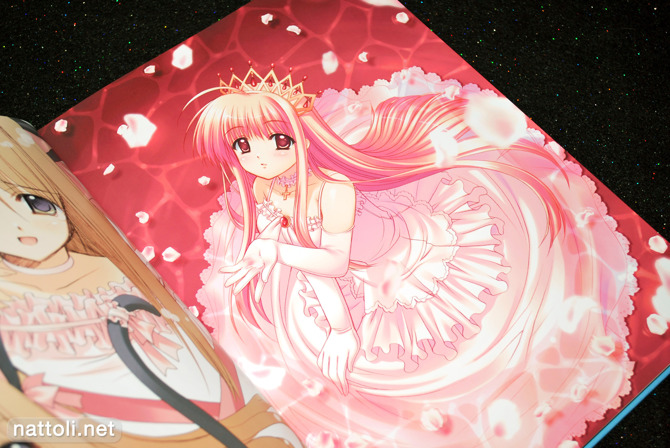 Aoi Nishimata Illustrations Nocturne was the second doujinshi art book Nishimata released via her circle Joker Type for Comiket 72. Up until the release of her commercial art book, VIVID, this was really the most recent collection of Nishimata's illustrations. There have been other commercial productions, but none that were all illustrations. 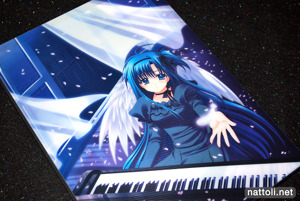 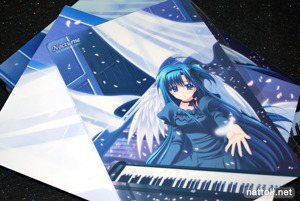 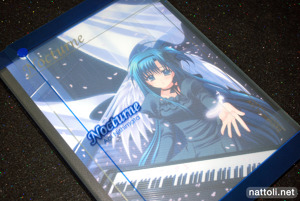 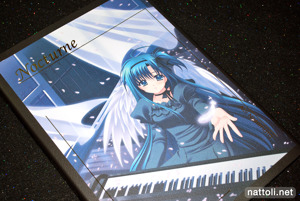 The packaging of Nocturne is quite unique, with the art book itself coming inside a plastic-snap folio with the cover illustration on the outside. Inside the plastic folio is a pencil board, a phone card and a B2 sized poster along with the art book, but they all use the same illustration so it seems a bit redundant. This actually sold on Toranoana for ￥10,500 when it originally came out, but you can find it on used book sites and auctions for much cheaper now. Probably even less expensive with the arrival of VIVID.

Nocturne is 112 pages and A4 sized. It's also a hardcover book that's printed with overlap, so spread illustrations can be viewed in full. Without having VIVID, I wouldn't have been able to make this observation, but the illustrations in Nocturne look quite washed out in comparison to those in VIVID. It's subtle, but Aoi Nishimata's illustrations don't 'pop' as much on a more faded palette.

Nocturne has a decent amount of overlap with the content in VIVID. For example, the illustration of the winged-girl in the water above actually occupies two separate pages in VIVID. Actually, all of the pictures above are also in VIVID, and on full pages with better coloring to boot ^^;

Nocturne was really a quite impressive doujinshi art book at the time though, with it's hardcover and full page treatment for most of the illustrations. Not a lot of artists could afford to do that kind of thing. Aoi Nishimata's doujinshi tend to be on the expensive side, and this was no exception. The majority of the art book falls under the Original Illustrations section, followed by the Different Illustrations section, which really just features works from commercial projects like Soul Link, Judgement Chime, and Lovely Idol.

The one thing that Nocturne (and the older Passion) include that VIVID does not are Aoi Nishimata's doujinshi illustrations from things like Da Capo, The Melancholy of Haruhi Suzumiya, To Heart, Ranma 1/2, Sakura Wars, Gift, Clannad, Kanon, and more.

Aoi Nishimata Illustrations Nocturne is a great artbook; it's well-made with loads of illustrations. But considering VIVID is already out, it would still be the better choice if you're looking for the most current collection of Aoi Nishimata's art work.

Nishimata-sensei's art is to die for, nee? ^^ If you want another (up to date) Doujin art collection by hers you may consider going for her ComikeSP5in Mito released ART Collection which is also pretty neat! Oh and メリークリスマス ナトリさん! ^^

You know, I actually find Nishimata's regular doujinshi work a little too expensive for their mostly monochrome contents. Are the two you mentioned an exception to that? ^^; I might just be satiated for a while with VIVID ^^

ART Collection is full color (despite the red/black cover may not indicating such) collecting recent Doujin color art by Nishimata (i.e. the uber-expensive/rare C77 JOKER TYPE MF towel art as well)..however it's a CSP5 release, so it's not that easy to track down now. The mug cup it came along with is pretty lovely as well btw. ^^