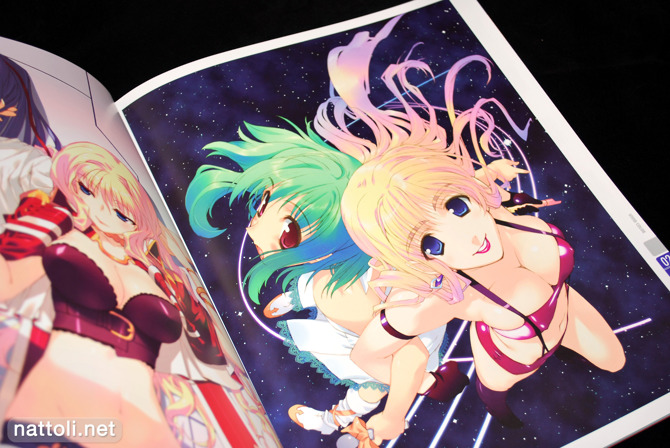 Construction-wise, this book is identical to his LEAF Illustrations Tatsuki Amaduyu Edition from the slip-on plastic cover to the dimensions of the art book. They do differ in length though, with VIVID COLOR coming in at 146 pages. Though, to be more accurate the index starts on page 127, and much like the other book artist comments are included with each illustration in the index which contributes to the length.

For the most part, if you've kept up with CUT A DASH! and BLAZER ONE circle releases, you'll have seen the majority of illustrations before, as they've appeared in Comiket doujins as well as their yearly desktop calendars. But one thing that is really consistent with CUT A DASH! and BLAZER ONE releases is the use of textured paper, which thankfully, this art book does not use. As a result, the colors and overall presentation is a lot better than it tends to be in the doujins.

Since the art work spans 15 years, there are a few works that look completely amateur in comparison to Tatsuki Amaduyu's more recent work. Not to mention, older illustrations were initially done at lower resolutions that weren't meant to be printed at all, so there are a couple illustrations with signs of upscaling for print. But these pre-2000 works only appear on about 12 pages, so it's not a significant amount.

There were several video game fan art illustrations, most of them from one of the many Final Fantasy series, though there was also Momohime from Muramasa. The Original art section runs from pages 3 through 51, while the Fanart section spans from pages 52 through 103. There really are a significant number of works in each section. 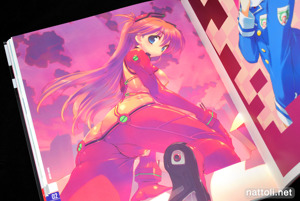 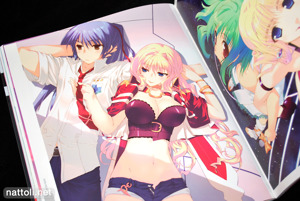 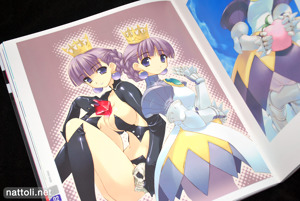 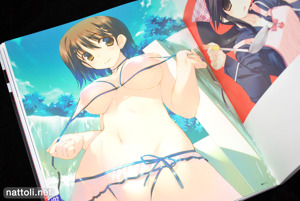 Though there are only two illustrations from Macross Frontier, I think I would have bought the book for these alone. Tatsuki Amaduyu does an amazing job on the coloring and styling for Ranka and Sheryl, even going with a more dynamic pose than you see with most fan art, and it really suits the series. The Asuka illustration above was newly drawn for this collection. I should also mention, there are a lot of up-angle illustrations along with heavy doses of fanservice, but nothing too extreme.

The final section is titled Calendar and runs from pages 104 through 126. It includes the calendar illustrations up through 2009 and they're generally presented with one larger, full page illustration next to a page of smaller tiled works. VIVID COLOR Tatsuki Amaduyu Illustrations 1995-2010 is a great collection, and if they're following the pattern of their LEAF Illustrations art books, then I guess we can be expecting a Mitsumi Misato version next year ^^

I was very pleased with Tatsuki's LEAF art book. I'll probably buy this one (in fact I'm already scouring Y!JA for it).

I'm looking for Hisuitei's 10th Anniversary Memory of Jade art book as well. Those two should satisfy my art cravings for the end of the year.

I'm rather disappointed in not seeing any 2011 Toranoana New Year post cards...they were going to be my highlight of the new year =.=

Happy New Year! Thanks for the memories and reviews! Let's have a great 2011 as well!

Yeah, I felt pretty let down by the lack of postcards too. I've been looking at Hitsutei's book but the auction prices are extreme. I may just wait a while on that one. At least there's plenty of other random C79 stuff to keep us all occupied! XD Happy New Year to you too!

Same. If you happen to see any on store sites like Mandarake, please let me know XD