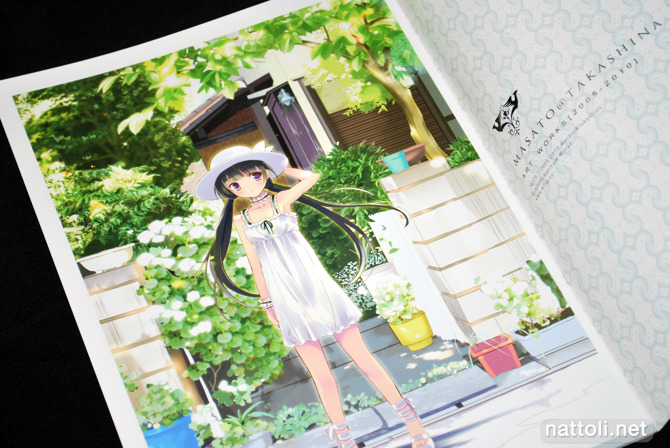 I've always thought that Masato@Takashina should be more well-known than he is, considering how long he's been around with his cute girls and colorful scenic style. My theory is the name is holding him back, because seriously, why would anyone need a @ in their name? I'm looking at you too, Ma@ya. 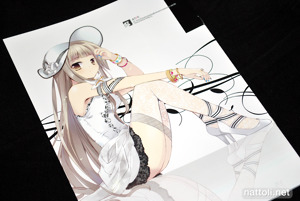 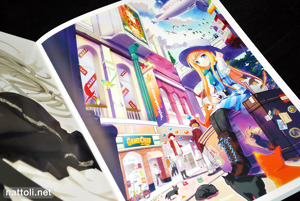 47PF is a short doujinshi, full color and B5-sized. Though it's only 16-pages (and that's counting the covers) there are several nice pieces showcased, although the cover and the first two art works definitely make the most impact with there detailed and lively backgrounds.

All the works are original pieces, and for the most part they're on plain white backgrounds. The illustrations Masato@Takashina did for K-BOOKS and Melonbooks are included, though they both share a page. I've also seen his works in Toranoana collections, but those weren't included. There are a couple of pages of character profile colored sketch-type art works, but they're just filler really. 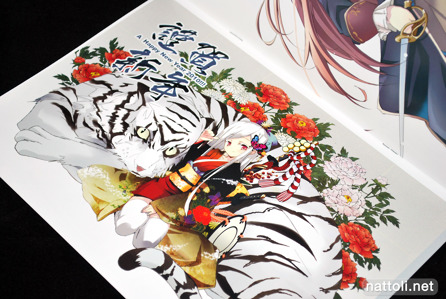 This was another of the standout works in 47PF, a New Year's illustration from 2010's Year of the Tiger. Although honestly, that tiger looks a little odd in the face. Anyway, as Masato@Takashina's first original art collection, it's pretty good. But I'm more curious to see what he's gathered together for his Comiket 79 collection ^^ Also, though it's sold out on the main shops, I'd recommend trying Alice Books, which you can order it from directly if you live in Asia, North America, Oceania, United Kingdom, France, and Germany. It's a start!

Whats this, Alice Books? This is new to me AND it has overseas shipping! :O

Yep, the selection is small now, but maybe if it gets more shoppers, it can grow :3

Clicked too fast, wanted to add a bit more.

As always, thanks for the review, and keep up the great work. I love stopping by every week or so and seeing a new review of something I really want hahaha orz

Get lots of good stuff from C79?

The printing is high quality AM screening, just visible enough if you're looking for it. To be honest, I've seen more non-background works from him, but I was hoping there'd be more like the first picture in his C79 release. I bought this based on that first illustration <3

I actually haven't done any C79 shopping yet. I've looked, but I've hit a kind of zen where I know these things will be around when I feel like buying :B

I eyed this artist for a while but I don't know if I will get anything soon. Maybe latter.

C79 shopping is going on strong for me. Almost done, and I didn't go overboard yet in term of auction. Just that Nardack's price are flying and tearfish is nowhere to be found :(

Yay for being almost done! I'm sure you'll get the other two eventually, hopefully for less than is being asked currently ~-~

Hmmm damn I do not live in noone of those countries... Q_Q. If i contact them will they speak English or i have to abuse translator lol... :B

PS:Oh and the shipping costs arent much cute eighter T_T. Iam a SAL user and 3500Y for 1 Kg... DAMN! X_X. I wish CDjapan would sell doujins too T_T

PSS: Cant find the item weight anywhere (not like 20 +/- doujins will weight a ton anyways... :B ). Would like to buy some stuff but the last thing i wanna end is with an order heavy as a tank... XD

They reply in English. Yeah, shipping is usually expensive, but at least there isn't the cost of commissions and 'bank transfer' fees along with internal shipping! Now that adds up.