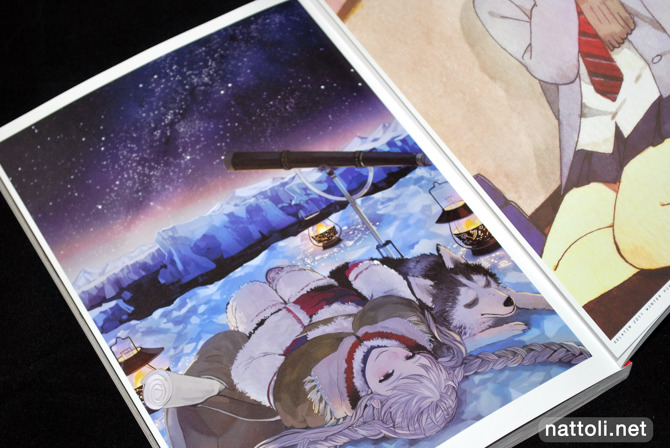 As GELATIN enters its third year, this original color comics magazine has prepared a lively collection for its Winter 2011 issue, complete with a bonus calendar and a subtle increase in price. The artists featured are increasingly more familar after the past year, combining older favorites like Usatsuka Eiji (Zero no Tsukaima), toi8, and mebae with the likes of Shihou, Sime, and TNSK. 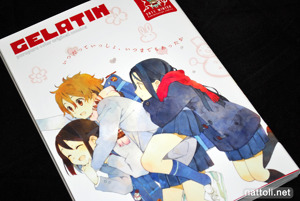 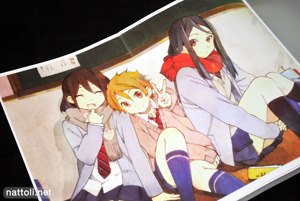 Art work by Shiromisakana (白身魚) graces the cover, with an additional version of the same three school girls on a fold-out poster on the inside. They have a very K-ON! style to them, whether or not it's intentional.

There are two pin-ups along with the fold-out poster in this 208-page issue, with art works by Saitom and Sime. The comics start out with a 17-page story by Daisuke Kimura titled 'Ananai.'

Mebae's 10-page color comic starts out with a burlesque-like setting, which is quickly revealed to be a box of chocolates anthropomorphized. And as we all know, chocolates are meant to be eaten so I'll leave you to guess how this ends ^^;

Some artists are becoming regulars in GELATIN, like toi8, with a 7-page mostly illustration comic, followed by Ayakura Jyuu's 11-page comic 'Kudan no Ken.' Houden Eizo continues STRAW with another 6-page installment.

Refeia's story is not done in a comic book style, but more of a series of full page illustrations accompanied by some text. Though it's only 5-pages, it's followed by a step-by-step process for the title page illustration. The 'History of the Man' section covers Usatsuka Eiji, and Kamo has a solo illustration that was done for the artists' merchandise site Design Garden.

More comics follow with the only black and white chapter by Hitori, and another short 8-page comic 'Cat's Day' by Yuu. Shin Hashimoto is back with 'THANS Terminal High-altitude Absolute Neshogatsu Sphere' though I still can't find it in my heart to like his style. Fuyuno Haruaki on the other hand has a style re-vamp with a 10-page contribution. Yuugen has a short 5-page comic and Shihou follows with 12-pages.

The last comic is by TNSK and runs 14-pages, and it's kind of dramatic, mirroring the story of the Little Match Stick Girl to the character in the story with a bit of a violent ending. Advertisements for the Girl's Bicycle District art book continue, pushed now to the beginning of February.

The bonus desktop calendar comes in a small sealed envelope attached to a page in the magazine. The pages come apart like postcards, and each features an illustration that was used in a previous issue of GELATIN as either a pin-up or a cover. GELATIN continues to be a good buy even with the mark-up, or at least they're keeping it packed with artists that I like to see new work from ^^;

There's a rumor that Shiromisakana is actually Yukiko Horiguchi, the chief animation director and character designer of K-ON!.

Judging from the style and the way Shiromisakana uses watercolors, it really looks like Horiguchi.

Heh, I believe that. It's impressive that she's managed to keep such a dual identity unconfirmed for so long even when the art work is so similar, since Shiromisakana's work has appeared around for years.

The picture I linked to? Art book, Majimoe Special Selection.

Very beautiful presentation, thank you for the review!

Am I stupid to buy this mainly for the calendar?? Ordered after reading this review ;)

Nah, I've bought more than my fair share of impulse calendars, considering I can only use one ;_;

This is so cool! I really want to buy this! Where can I buy it?

I use Amazon Japan, but just search "GELATIN 2011 Winter" in Google, nearly every front page result aside from my site is a place you can buy it from.