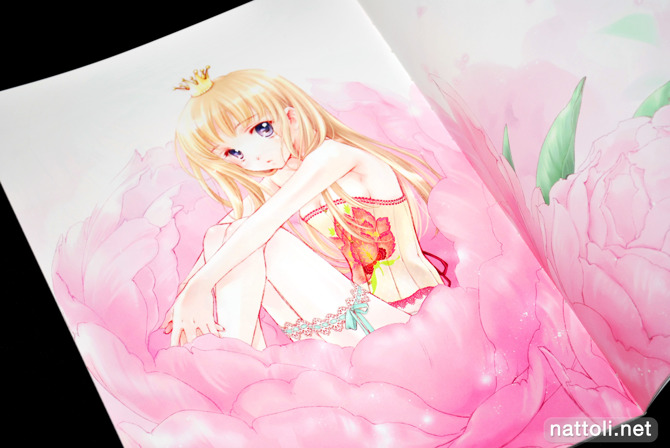 Kaori Minakami's second corset-themed doujinshi came out for the Summer Comiket, and unlike the last book, Corsetier Meets the Fairy Tales is entirely illustrations by Minakami. In this volume, Kaori Minakami explores illustrating corsets to fit fairy tale characters like Snow White, Thumbelina and several others.

Corsetier Meets the Fairy Tales is B5-sized and 28 pages including the covers, but unfortunately it doesn't make the most of that space. Some pages are little more than placeholders, with character information only. Others are photographs of corsets. The Thumbelina cover illustration actually appears in the book (with some variation) twice. So while the page count sounds decent for a doujinshi, the actuality is that there are only seven illustrations in this book. I couldn't help feeling a bit let down at that, especially considering the higher than average price tag of ￥1155 on Toranoana. 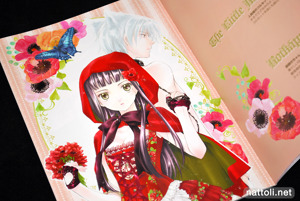 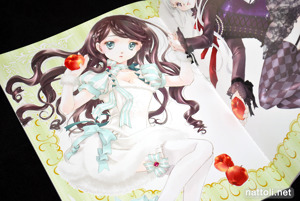 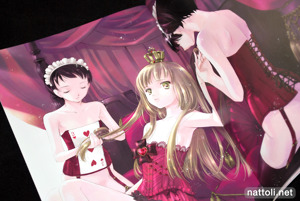 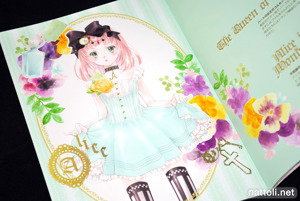 Still, I did really enjoy this new take on such classic characters. Most of the above are quite recognizable; Little Red Riding Hood, Snow White, and the bottom two from Alice in Wonderland---the Queen of Hearts and Alice respectively. The Mad Hatter is also included, but not pictured, along with The Little Mermaid. The corset designs are beautifully detailed, but also functionally realistic; you can really tell accuracy was important to Kaori Minakami when designing these. 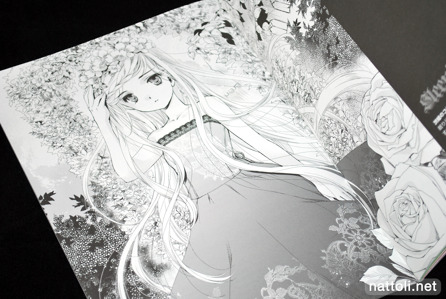 After the Mad Hatter, the presentation changes from color to monochrome, with the last eight pages presented in black and white. Only one character illustration, Sleeping Beauty, is included in the monochrome pages. The rest is used on an index with artist comments and some photos of doll corsets by Kaori Minakami. All in all, it's purchases like this that remind me patience is a virtue, and sometimes waiting for an art book is a better option ^^;