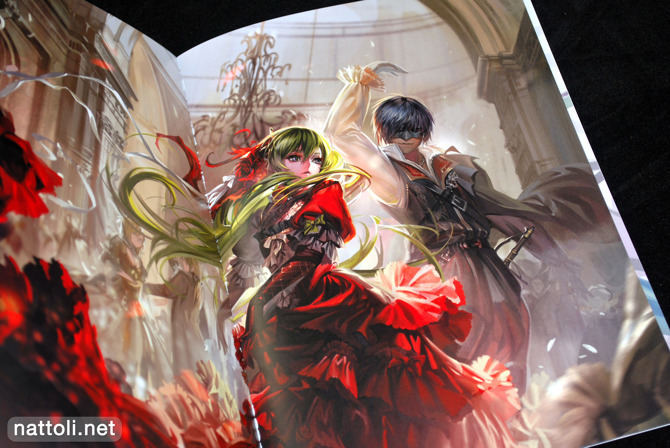 Alphonse's B&W White Radio & Black Rock Shooter is a sort of two-in-one collection, where depending on which cover you open the doujinshi from, you get a different story. Both sides feature beautifully illustrated stories, much like the color comics we've seen in GELATIN, that place an emphasis on being able to tell a story that anyone could understand through the art work alone. 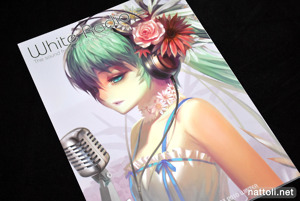 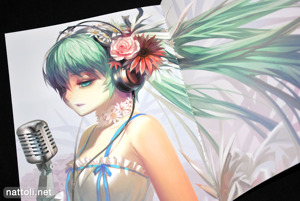 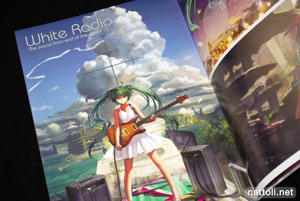 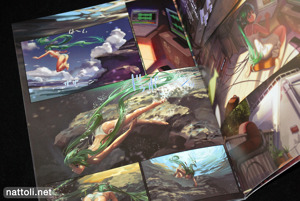 An extended version of both of the covers is available inside B&W, both of which are remarkable pieces of art. ALPHONSE's style is painted and detailed, and brings with it an array of impressive lighting. On the White Radio side, you can truly feel the progression through Hatsune Miku's day with the subtle changes in the way the light colors her and her surroundings from panel to panel.

B&W is B5-sized and 44-pages when counting the covers and the two sides take up an equal part of the book. The music that inspired the art for White Radio is Last Night Good Night by K'Z, which is really worth listening to if you haven't heard it. I think it really fits the mood of the art work beautifully.

The Black Rock Shooter side is equally beautiful and features the title character. The section starts out with three full-page illustrations along with an extended, two page spread of the cover art work. The comic itself is done nearly entirely without any dialogue except on the very last page, which allows for some very beautiful imagery.

The comic covers a battle between Dead Master and Black Rock Shooter that is ultimately resolved. It more or less looks like the story line for the actual Black Rock Shooter animation. On the final page, we see their other selves, as school girls Kuroi Mato and Takanashi Yomi. Even though B+W White Radio & Black Rock Shooter is mostly comics, the art work is so exceptional that it doesn't even take away from the presentation. B&W is still available on Toranoana, and though it's expensive for a doujinshi, it's definitely worth it.

Holy.... Alphonse is always one of my top fav artist! So beautiful!

That art is really stunning! 0_0

This is.... freaking amazing art O_O

I just crapped my pants due to awesomeness.

I do want this ò.ó

waa I need the ISBN of this artbook

At the top of each post under the title, I list the section along with the artist (and now convention when applicable), and if it's under 'Doujinshi' there is no ISBN.

The artist is Chinese, and I was fortunate enough to meet her at Shanghai's ComiCup 08. The doujinshi is even more beautiful in person, and I highly recommend picking it up if you haven't done so already!