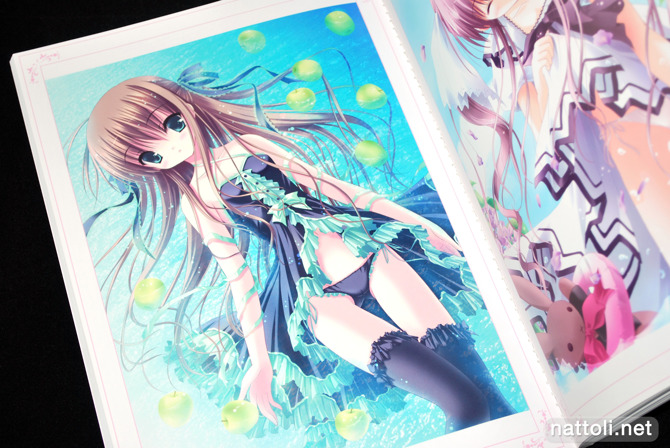 Rabbit Net Chronicles 2004-2010 is an art book-sized doujinshi, released for Comiket 78 featuring art works from many big name artists like Tinkle, Ginta, Ikegami Akane, Tsubasu Izumi and many more. These illustrations covered a variety of goods from decorative bags, to pencil boards, to dakimakura that were released through Rabbit Net over the past few years.

Since the illustrations range from 2004 to 2010, some of the works are starting to look their age, and it's especially noticeable when there are several works by the same artist. For example, Tsubasu Izumi has a total of 9 illustration in the book with several of them being older works that have been featured in her Colorful Pop doujinshi series.

One of the downsides is that since this book has been such a long time coming, you'll have already seen many of the art works in the artists' own doujinshi and commercial art books. It's also worth noting that there are several of racy illustrations in Rabbit Net Chronicles, in fact probably about a third of the illustrations feature some degree of nudity.

Though it has its ups and downs, Rabbit Net Chronicles is a great art book overall, even if that's only for the great selection of artists it's brought together under the same cover. Then again, it'd be hard to disappoint, considering the content is made up of years of specially commissioned art works!

I have not seen this artbook before! I love this type of art! thank you!