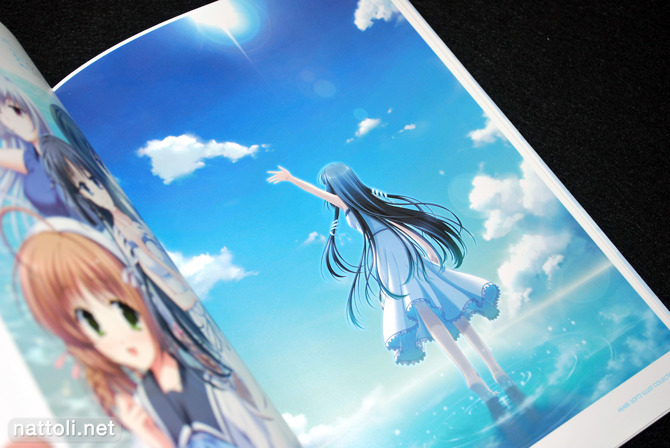 AKABEi SOFT2 Illustration Collection is an art book much in the same vein as previous memorial illustration books to have come out over the past year like MOONSTONE Complete and Circus 10th Visual Album. The major difference with this one is that AKABEi SOFT2 hasn't really been around anywhere near long enough to bring out this kind of memorial collection. I think they just jumped onto the recent trend with this one ^^; 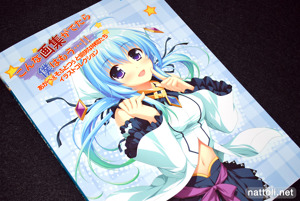 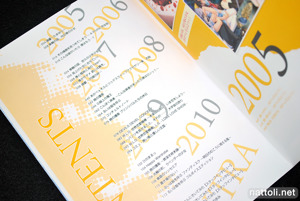 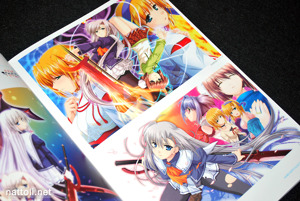 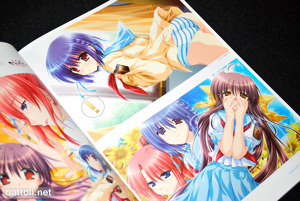 One the other hand, being that the studio is just 5 years old, all the illustrations are fresh and from games in recent memory. I'd also say most of their artists have really come into their own recently, being even more in demand as illustrators. The artists featured throughout this book are Alpha (有葉), Cle Masahiro (呉マサヒロ), Tomose Shunsaku (トモセシュンサク), Refeia, Odawara Hakone (オダワラハコネ), Saeki Hokuto (さえき北都), Yuuki Hagure (憂姫はぐれ), Konpeitou (こんぺいとう), Asami Asami (浅海朝美), and Moritan (もりたん). Though, with Alpha being the artist for most of the games, she also gets the cover ^^ Actually, it's more likely because Okiba ga Nai! (置き場がない！) and this art book were released just days apart.

Game coverage through out this 128-page, A4 sized art book varies from a single page with one illustration, to multiple pages with as many as nine illustrations packed on each. I've grown used to seeing a lot of illustrations tightly packed in these memorial/anniversary type art books, so it's not as bad when I expect to see it. The print quality is lacking a bit though, in particular because so many of the illustrations have thin line art that just gets eaten up at such small prints sizes.

The largest section went to Alpha's The Devil on G-String (G線上の魔王), with a total of 16 pages. The Devil on G-String is also heavily featured in her Toranoana pamphlet Pictures at an Exhibition of Alpha. In fact, many of the illustrations that are tiled four to a page in AKABEi SOFT2 Illustration Collection are given a full page in Pictures at an Exhibition of Alpha. 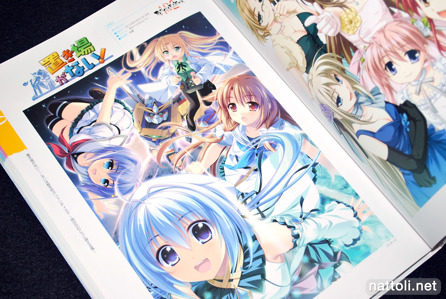 The illustrations are divided by game and by year so as you might guess, there aren't a lot of illustrations for 2010, with just 11 pages in total since several of the games are just recently released, or are in the pre-release stage. Even still, AKABEi SOFT2 Illustration Collection presents a great collection of art work with illustrations most of us wouldn't otherwise get a chance to see. I'd say even if you only liked a few of the artists cough Alpha, Refeia cough you would get some enjoyment out of this collection ^^

argh! look at those thumbnail size images inside a printed book!!! not cool!

While I'm not much into Visual/Illustration Collection Artbooks it's great to see they compilled the various AKABEi Brand projects within one book (rather than making it one for each) as they're having some great talents assigned (particularly ALPHa is one of my favorite Eroge/Bishoujo Soft artists and if you enjoy her art I'd highly recommend you to get ahold of AI❤ ALPHa’s ILLUSTRATION❤ which she released back for 08 summer Comike).

Funny you of all people should say that! XD I've been looking for AI❤ since having seen it on your site last year. Granted, I don't check every day, but I haven't seen it on Yahoo Auctions once yet and I look pretty much every time I'm placing a deputy order. Must have been really limited, or everyone who bought it wanted to keep it ;_; Or just bad luck for me >_<

And thanks, I fixed the gender ^^

Now I may be spending way too much time in search for Doujin purchase sources than is good and healthy for me and my wallet but..the Fukuoka Mandarake still got AI❤ stocked for a quite lovely price -> Nat edits: mwahahah.

Thanks! They've really got a lot more listed now o_o It's unhealthy for my wallet too, especially with the ton of art books coming out in July... >_< Anyhoo, now I just have to wait and hope no one else went for it :3

They left me hanging for a few days there, but I got it! Thanks again! :3