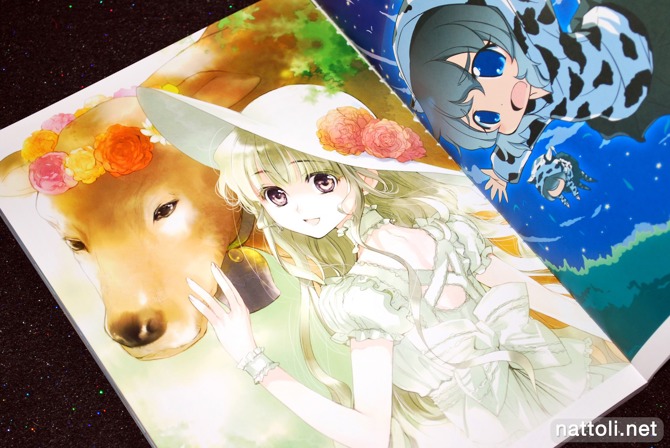 We Love Mow Mow is a collection of charity illustrations drawn to raise money for farmers who lost livestock during the 2010 outbreak of foot and mouth disease in the Miyazaki Prefecture of Japan earlier this year. Thousands of cattle and pigs were slaughtered to curb the spread of the infection, and farmers bear those costs. All of the profits for We Love Mow Mow were donated, the bulk of which were received during Comiket 78. 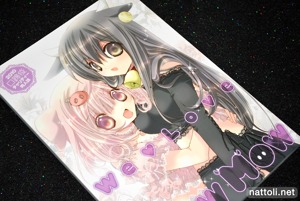 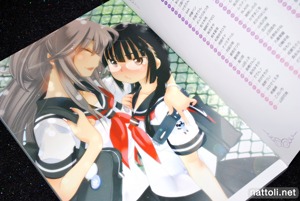 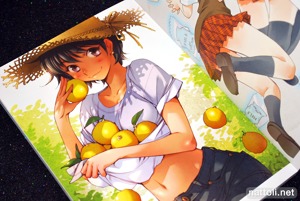 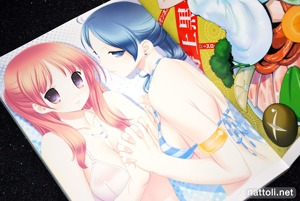 Several artists professed to being big fans of the Wagyū beef that comes out of Miyazaki prefecture on their websites when talking about We Love Mow Mow. The opening illustration is by Kaya Kuramoto, and the illustrations above are by Koge Donbo (cover), Kodomo no Jikan's Kaworu Watashiya, Kerorin, and Itoh Ben.

The illustrations for the most part feature girls wearing cow and pig costumes, or girls next to cows and pigs. There are also several illustrations featuring girls eating beef and pork. But there are a few pictures with mermaids, girls with lemons, and other illustrations of school girls that seem to have nothing to do with the overall theme. But seeing as it's all art, there are numerous ways to interpret any illustrations, so I'm sure they somehow fit. Pictured above are illustrations by Tendou Kirin, Fujieda Miyabi, Yamada Jieita, Takigawa Yuu, Fukasaku Emi and Kobuichi.

We Love Mow Mow is B5-sized and 104-pages including the covers. It's packed from start to finish, with an impressive total of 97 artists. The full listing of artists, along with links to their twitter accounts is available on the We Love Mow Mow website. They also go over how much they've been able to donate along with their actual production costs, which is pretty interesting. Some of the more well-known artists featured were Blade, Kouga Yun and Mutsumi Sasaki, whose styles are clearly visible in their illustrations. Danny Choo mascot artist Azami Yuko also provided an illustration. 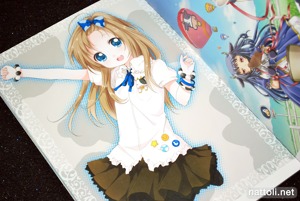 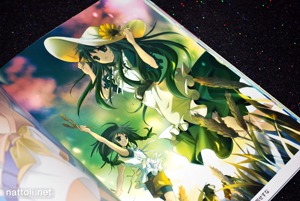 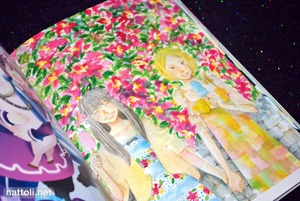 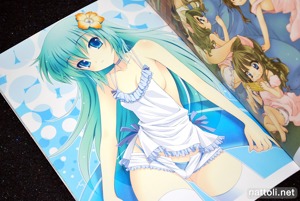 In total, 6,500 copies of We Love Mow Mow were printed, of which 4,618 were sold at Comiket 78. Another 1,500 were sent to consignment shops like Melonbooks, where they agreed to sell it at retail without taking a profit for themselves. It's really refreshing that so many people can come together for a good cause. Copies are still available too! Artist names are included in the image tags, so if you're curious about any of the artists picture, just click a photo.

A few others from some of the more recognizable artists: Chisato Naruse, Miyasu Risa, and Mamoru Yokota. 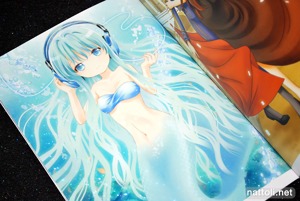 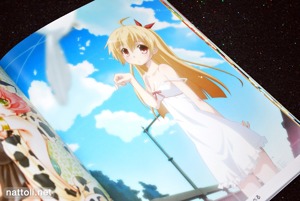 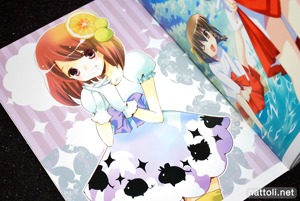 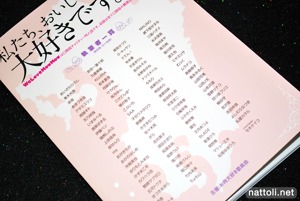 The illustrations were excellent overall, and even the works from artists I didn't recognize were well done. It's not often than you see this many recognizable artists in a doujinshi production. And it's quite nice to know it was all done for a good cause as well ^^

I never thought I'd end up saying something like that, but damn the cow (and girl with it of course) in the first illustration is beautiful _

That one is by KUJIRA. Randomly, it was this one by Tendou Kirin that made me think of Umino Chica. Must've been the little blonde girl XD

Very nice. I actually just ordered this right now after reading your review because there was enough illustrations that I liked to warrant purchase as well as myself wanting to help out the farmers.

Also there appears to be quite a few artists I've never seen before but am liking their style. That's something to look out for the next Comiket if they're marking out there.

Speaking of animal themes (well, not really since I'm just bringing this up now), I really can't wait for Toranoana's 2011 post cards (I wonder if Melon Books does it too...). Year of the rabbit I believe. Though the "bunny girl" theme seems to be kinda over done these days o.o

I'm year of the dragon, personally, so 2012 is my year. I can't wait to see those illustrations.

I totally forgot it was the year of the rabbit! I'm looking forward to that even more now, since 'bunny girls' can easily be sweet or sexy, and it'll be nice to see how each of the artists go with those.

I was thinking though, I don't really know that there will even be postcards this year, I'm just assuming they will since there have been for a couple of years now. Just warning you, in case you want to shoot the messenger or something >_<

I hope they do. Though I think they will since the first year they only had one set right? The next year it was three so I guess they did quite well the first time (^^;)

There's no way they would pass up the year of the rabbit. Bunny girl galore. That's gotta be an easy hit.

Looks like a surprisingly good collection for being a doujinshi book. Might have to pick this up.