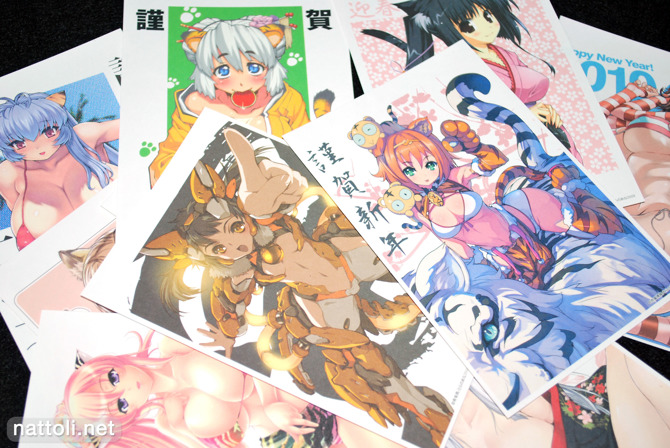 As many of you have guessed, Toranoana released another set of New Year's postcards for 2010 as well. And it's really a Tora-year, considering Toranoana's mascot is a tiger. But this time, instead of having only 10 cards like the 2009 set, there were three different sets (A through C) of 10 cards each. So it comes to a grand total of 30 postcards, by 30 different artists.

The postcards measure 4.25 x 6 inches, which is the standard size for postcards. The cards have a matte finish with high quality printing---especially for postcards. There is a very slight paper texture that you can only see in the darker printed areas.

Though all of the artists are known in their own right, I would say that Set A has an edge over the other groups. Top row features Sumeragi Kohaku (すめらぎ琥珀), Izumi Mahiru (泉まひる), and BLADE. Izumi Mahiru is really becoming a regular participant in Toranoana goods illustrations, with his works featured in Toranoana's Ikkitousen and Queen's Blade fan books in the past year.

Above, we have Kotoyoshi Yumisuke (琴義弓介), Misaki Kurehito (深崎暮人), and Kuroboshi Kouhaku (黒星紅白). Kuroboshi Kouhaku is probably best know for his Kino's Journey, and is also a regular participant with Toranoana goods illustrations. And even if you don't know the name, you've probably been exposed to Misaki Kurehito's work. He was one of the featured artists in the most recent issue of Megami Creators.

And on to Set B! This bunch has a few cards in it that I just love, so even though most of the cards weren't to my tastes, I couldn't pass it up! Above, from left to right we have Nyangoro (にゃんごろー), Thomas (藤ます), Kamino Ryuya (上乃龍也), RAITA, Kizuki Aruchu (鬼月あるちゅ), and Sasahiro (笹弘)---the only one of those I could name before doing this review ^^; Nyangoro has a style so similar to Mogudan, I can only assume they must work together...

I confess the postcard by Akaga Hitotaka (赤賀博隆) was my main reason for buying this set. My second reason is the one in the middle by Keuma (希有馬) because it wasn't another tiger girl in a bikini, it's a tiger girl in a mecha suit! The last card pictured is by Tamori Tadadi (たもりただぢ), by whom I also have an old art book called Candy Wrap. Nice to know he's still a relevant artist. Not pictured in this bunch is the card by Yasui Riosuke (ヤスイリオスケ).

And finally, Set C. I've made it a point to include the Japanese names for all the artists (that have one) so that if you're interested in their work, you can more easily find it. Pictured above are cards by Inoue Sora (いのうえ空), Bekkankou (べっかんこう), and Tomose Shunsaku (トモセシュンサク). Tomose Shunsaku is the only artist to be featured in both the 2009 and 2010 Toranoana postcard sets. Bekkankou designed for games like Fortune Arterial, and Yoake Mae Yori Ruriiro Na. And Inoue Sora illustrated Samurai Girl: Real Bout High School though you can't see much of that style in the postcard.

And finally, we have JOY RIDE, Shimakaze (島風), and Hiroe Rei (広江礼威). The card not pictured from this set is by Raidon (来鈍). Hiroe Rei, the artist for Black Lagoon, drew my favorite card from this bunch. There had to be at least one card in each group that I really liked, thus forcing me and other weak-willed consumers to buy all the sets ~_~

Postcards are an odd thing to store and be able to display properly. I'm thinking of buying one of those decorative binders Toranoana sells to organize them. Just have to find the right kind of plastic pages... If you're interested, you can still buy these postcards on Toranoana. Might be something nice to bundle with a Comiket 77 order ^^;

I personally dont like things with dates on them, makes them feel expired as soon as the next year comes :P

A little too late for new year 2010 cards for me, nice find anyway!

Even though Izumi Mahiru has a very signature style and his work tends to blend together, I've really taken a liking to his art. Love his Horo and CC doujin, and his Mai Shiranui "Queen's Gate" book.

Ah! I completely forgot the Mai Shiranui Queen's Gate book. That's probably what people would know him best for ~_~

Might be a something nice to bundle with a Comiket 77 order ^^;

I feel like most things I get is to be bundled with the C77 order lol ( meaning, compulsive order at Toranoana while checking the daily digest <.< >.> )

I did the opposite this time and went overboard with auctions ~_~ Then again, at this point I just know there are some artists who never have their stuff on in the shops...

I ordered all three sets in addition to Ryo Ueda's Fragments release. Too bad Toranoana doesn't stock the 2010 calendar...I have to get that one in auction which by its own right will be expensive.

I'm going to end up passing on the calendar this year, since I already ordered the doujin by itself. But with 84-pages of awesome art work, I think I'll manage to forget about the loss ^^

Hmm. I still haven't ordered anything from C77, but this might fall on my radar even though I normally am not too interested in a collection of "moe artwork". But girls in "tiger-wear" are kinda a soft spot... :X