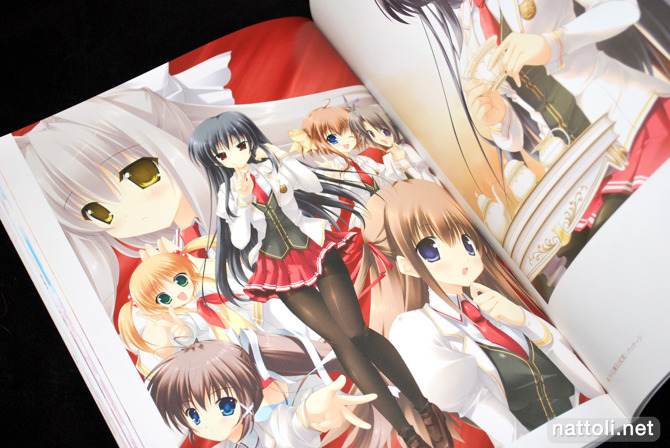 Marmalade Illustration Works is a studio collection art book for the Marmalade games and it features promotional art from multiple games and artists. The games included are Konneko, Miraroma, Lyrical Lyric, Lyrical DS, and Kiss to Maou to Darjeeling. This art book is much in the same vein as other recent studio centric books like MOONSTONE Complete Illustrations, CIRCUS 10th Visual Album, and AKABEi SOFT2 Illustration Collection, providing a great overview of the game art work without going into to much detail with profile pages and in-game CGs.

Marmalade Illustration Works is A4-sized and 162-pages. The book is nearly all color, except for the last 15 pages which includes 6-pages of monochrome illustrations, an 8-page interview and a couple of pages listing the game information. There is no index, but the illustration publication information is listed alongside each art work. The first section is for Konneko (こんねこ) and it's 15-pages long with art works by Mikeou. 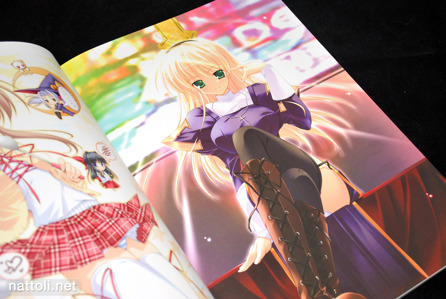 Miraroma (みらろま) is featured in the second section, and it's also illustrated by Mikeou. It's 23-pages long and features several two-page spreads. Unlike other recent art books, Marmalade Illustration Works doesn't include any overlap, so page spreads do get cut off a bit in the center. Miraroma came out in December of 2005, so the art work is starting to look a little dated ^^;

The bulk of Marmalade Illustration Works focuses on Lyrical Lyric and Lyrical DS. The art work for both games is by Mikeou, Fumio and Chikotam, though everyone is following the style of Mikeou. Still, you can spot the differences when it's Chikotam or Fumio ^^

Lyrical Lyric covers about 50-pages of this art book and Lyrical DS is a much shorter 13-pages. Also, there is nudity throughout this art book, but it's not the majority. 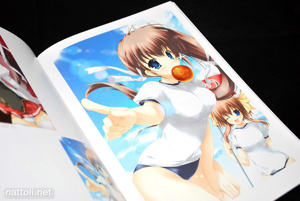 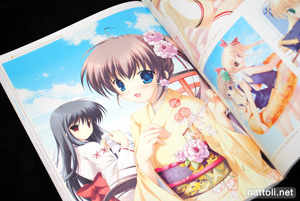 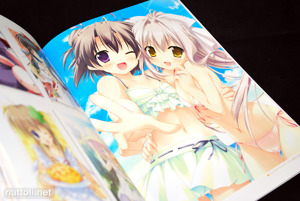 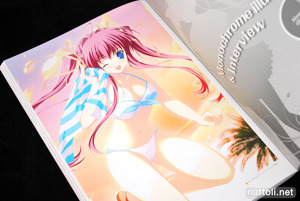 The last game featured is the most recent, Kiss to Maou to Darjeeling, which also sports the largest array of artists; Takanae Kyourin, Chikotam, Mikeou, Sasorigatame, and KENGOU. Though it's a comparatively short 15-pages, it's still some of the best art work in the book. The rest of the book features crossover works from event goods and miscellaneous works before reaching the interview. Marmalade Illustration Works does a great job of covering the many Marmalade games out there and would be an especially good purchase if you're a Mikeou fan ^^

Looks very nicely made. Worth a consideration tbh :3

I love that art book, but it's definitely on the back burner now. I realize I buy more than I could ever review and am trying to find some way to prioritize...

I hate to say it, but if you're curious about that book, just Google it, you'll be able to see it in its entirety ^^; And you can even get it on iTunes!