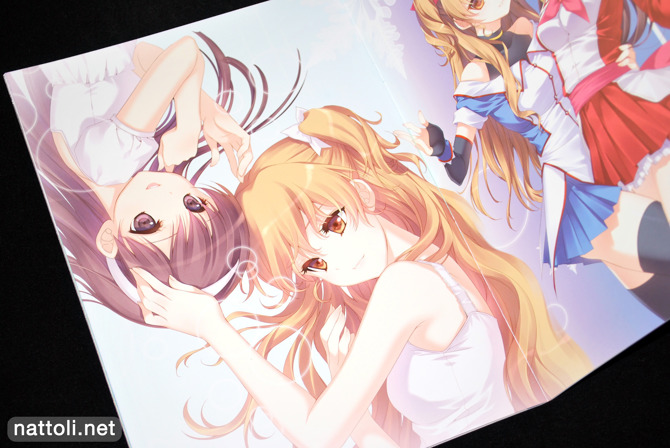 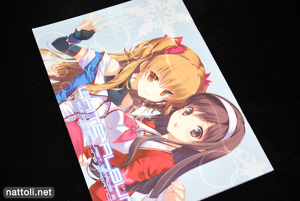 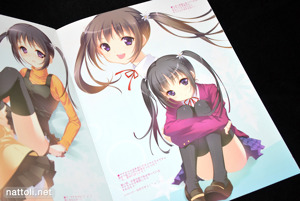 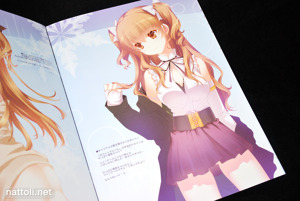 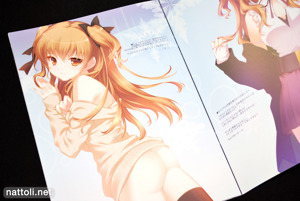 WHITE ALBUM +A is a B5-sized staple bound book that is 24-pages including the covers. It's printed on heavy card stock style paper with a smooth and glossy cover. The back cover actually includes an illustration that isn't in the book, and the inside covers are used for Shirahane Nao's greetings and thanks, so every page is occupied. Fan art works from White Album are featured on the first 8 pages of the collection, along with the last two. Rina Ogata is especially sexy in Shirahane Nao's soft style.

The rest of the book features fan art from HeartCatch PreCure!, MM!, and OreImo. Shirahane Nao's versions of the MM! girls are possibly cuter than the originals, and there are four pages of illustrations from OreImo. There is also one original character illustration that originally ran in Dengeki G's Magazine. 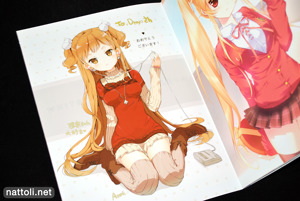 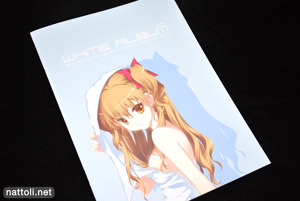 There's one guest illustration by Korean artist Anmi, who has a style more similar to CUTEG and Nyanya than Shirahane Nao. WHITE ALBUM +A is a surprisingly nice collection for an interim release, and good to see that more and more artists are taking the time to do high quality books outside of Comiket season ^^

Do you know some other way to get this book, because I looked on ebay but I couldn't find it (Did she also released it on Toranoana?)

This one was event only, so auctions are the way to go. Yahoo Japan Auctions are also an option with a deputy shop. That being said, she's had a history of releasing her doujinshi on Toranoana several months after their initial sale, so depending on what you want to spend/how much you want it, it may be worth waiting a while for it.

Okay, thanks for telling me ^^

White Album's anime was largely a shill to get people to buy the new PS3 game--it seems like it was intentionally written to get its viewers to buy the CDs and/or the game, since the anime's plot seemed to frustrate its viewers looking for a believable love story at every opportunity.

Having said that, the game's designs are quite nice, and this fanart looks like an improvement over them as well. Any chance you'll get the PS3 game and give it a review?

As much as I like the art, can't say as I've ever even considered playing the games ^^;

If you understand Japanese, it might well be worth a try for you since the character designer (Hisashi Kawata) did a good job of it.

Yeah, I actually have Hisashi Kawata's Leaf Illustrations art book, which collects his White Album art works along with other Leaf works. I really love his art, but I'm not the target audience for that game. I know some girls like VNs, but I'm not one of them ^^;