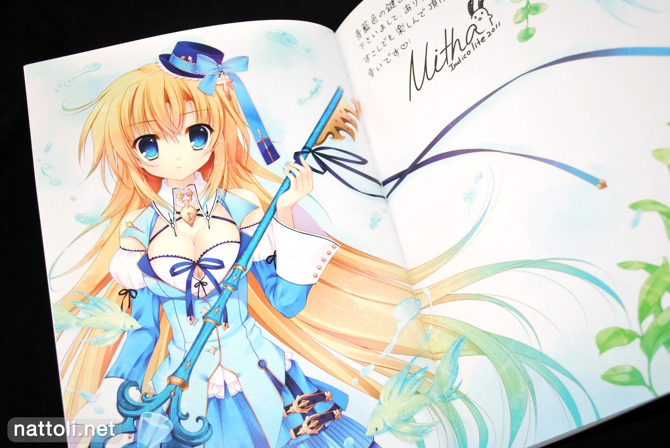 For some reason, I was prepared to not like Indico Lite Key ― Mitha Illustrations mostly because I anticipated there would be an abundance of older illustrations since this is Mitha's first art book. So I would venture to say that it's actually a pretty good art book overall, though it could be the case of a combination of lowered expectations with mediocrity.

Indico Lite Key ― Mitha Illustrations is A4-sized and 128-pages long. It's full color all the way through, and there isn't an index; instead, you can find the copyright information and in some cases, Mitha's comments on (and under) the illustrations themselves. If you happen to also have Dengeki MOEOH's Ten Colors, then the first 11 illustrations in the art book will be a repeat for you.

One of the great things about Indico Lite Key ― Mitha Illustrations is that pretty much every illustration gets a full-page display. They're also framed with white borders, so the illustrations aren't cut off by the book gutter. Though there are only a few two-page spreads, they're not printed with any overlap.

There are also several pages of art work from Mitha's commercial works, like Marginal Skip, Clear, and Gift. There's also art by her from Shuffle, Fate/Stay Night, Oretachi ni Tsubasa wa Nai, Tristia of the Deep Blue Sea, D.C. Da Capo and more. Though much of that amounts to single illustrations, it still makes up a nice portion of the book.

More of Mitha's older works can be found in the latter half of the book. Like with Kantoku's recent STEP Kantoku Art Works, these older works do not finish the book, but rather, appear right before the end so that you feel more like you've finished the book on a high note, with newer art work. Even still, the older pieces are still nicely selected and fit in with the overall quality of the art book. 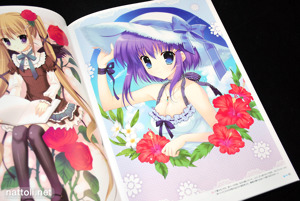 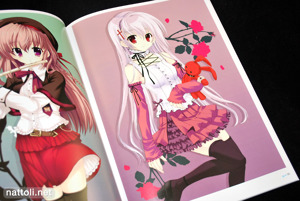 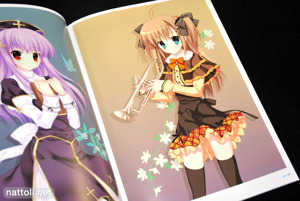 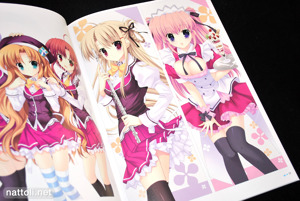 Unfortunately, not every picture was originally large enough for a full-page in an A4-sized book, and this really shows on pages 103, 113-115, 117, and 120 through 123. The art work on these pages is so badly upscaled that the artifacting looks like dirt and the outlines are jagged. You can also see traces of poor digital copies on some of the other illustrations, but these were the worst off. It's a shame, because it really is visually distracting. I haven't seen sizing this bad since Yukirin Art Works. 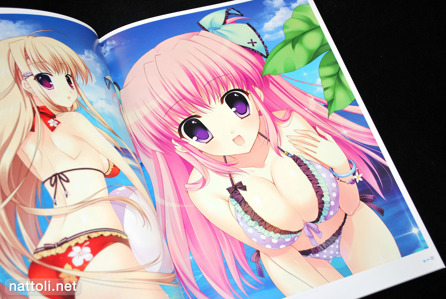 For the most part, Indico Lite Key ― Mitha Illustrations was a well-selected and presented collection. If it hadn't been for the pages of lower quality images, I would have been more impressed. But that's not Mitha's fault, MOEOH Selection is definitely slacking :P

I'm still waiting this artwork to arrive. To be frank with you, I bought it mostly because I'm a fan of Mitha's illustrations. Since I wasn't able to get most works published by Mitha's circle, Indico Lite, it was a good opportunity for getting older works. ^_^

I bought it mostly because I'm a fan of Mitha's illustrations.

That's the best reason to buy any art book ;D